Did it really take my husband a blog post to realize that I really do like surprises?

And he almost gave up a few surprises that he has up his sleeve until I stopped him in his tracks. 🙂

But a couple of weekends ago, he had a surprise brunch idea. The only trouble, is that I had to drive to this surprise destination! How does one do that? Well, have someone else plug it into your GPS, that’s how.

It was a complete surprise to me until a few blocks before we arrived. When I saw that the destination would be on my right, and Nighthawks was listed as the destination in my iPhone app, Rob looked over at me smiling ear-to-ear. He had chosen another restaurant off my Restaurant Wish List at the bottom of my Restaurant Impressions page!

Nighthawks is a hip neighborhood joint in south Minneapolis that opened a little under a year ago. Part diner, part bar, it’s the perfect place for breakfast, brunch, lunch, dinner AND late night eats. Of course, Rob had his eye on the burger and that is what sealed the deal for coming here.

We chose to sit at the bar, although there are a few tables and also diner counter seating near the kitchen. {See, part bar and part diner?} The tap selection is quite unique, with several local beers on draft. {You know how I love that!}

Rob chose the Founders Mango Magnifico {not pictured} and it was truly that – magnifico! But what doesn’t Founders do that isn’t?! It may even have to go into a Fantasy Draft in the future. The mango was definitely there with a nice habañero finish that wasn’t too overpowering. This beer didn’t get very good ratings on Beer Advocate, though. Many beer snobs complained that it was too sweet. I didn’t get that at all, but maybe that’s because I was expecting a fruit beer, PEOPLE! It’s not like it was a Mango-infused IPA or something.

Anyway, my beverage of choice was quite different: 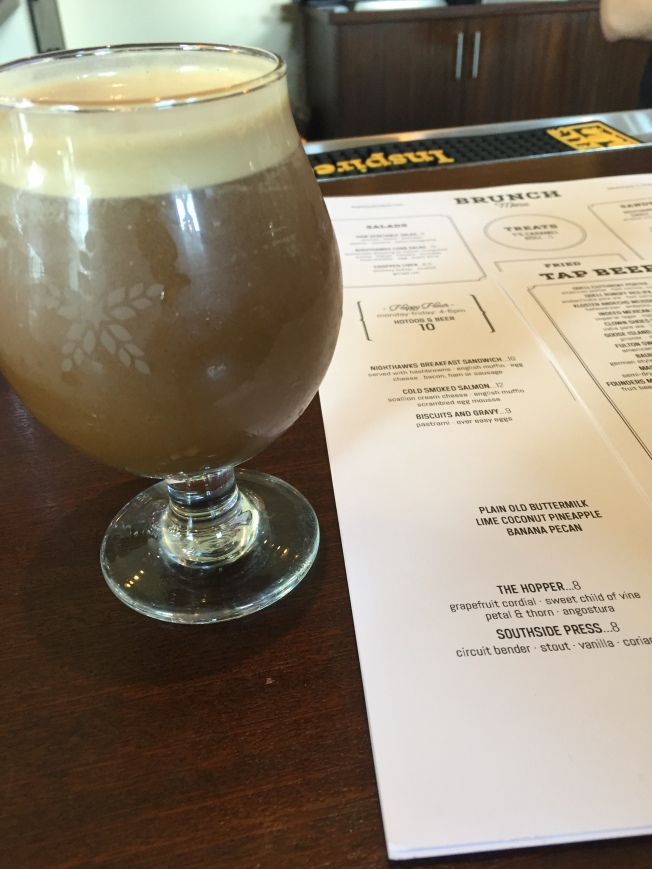 Oh yes! This was sooo tasty. It was sweet, but something that was perfect for a brunch bevvy, you know? It might even make a great dessert. Circuit Bender is Five Watt‘s {just next door!} cold press coffee. Mixed with stout, vanilla and coriander, this caffeine-fueled drink is smooth and creamy and just all-around yummy.

For eats, I was debating between a delicious-sounding Wild Mushroom Omelet and the Huevos Rancheros Dog. Our bartender was stumped, but said he’d probably go with the dog just because it was more lunchtime now than breakfast. I went with it since I’ve learned how much Latin flavors satisfy me at brunch!

Holy dog! It was enormous-looking, but magnificent in presentation. The guy down the bar from us looked over wide-eyed. “I wish I would have got that!” he said. “Last time, I got the burger. This time I was debating over the pancakes or the dog. I’ll definitely be getting that next time!” {I’m not much of a pancake eater, but for the record, the ones at Nighthawks are raved about on the Interwebs.}

I will say this: The dog was more show than it was flavor. There is no way I could have picked this up; so the bartender offered me a knife and fork. I ate almost everything except the bun, but wasn’t quite satisfied completely. It was served with this sauce pictured below, but I didn’t think it would need it. I forgot about it when the stunning dog arrived! {Perhaps it would have added a little more depth.}

As for Rob, I thought he might change his mind and order the Brunch Poutine with pulled pork, poblano gravy, cheese curds and fried egg. But he stuck to his guns!

Oh dear. This burger just melts in your mouth. I had more than one bite of the juicy goodness and Rob still couldn’t finish it. Those fries are worth the splurge, too. Why no use/overuse of exclamation points here? Because it is so good, it’s almost scary. I want to whisper…

Note: Rob hates to split food, but he did promise me that day that the next time we go back we can split this burger. It’s just so much food! I wanted to put this in writing lest he forgets when his stomach is growling next time. It always sounds good in theory; but when we actually sit down at a restaurant, he gets annoyed when I suggest we share something!

Yes, we’ll be back to Nighthawks, especially when I have a burger craving…

What’s the most insane/unique hot dog you’ve had?

What is your favorite kind of hot dog?