I visited my friend Stacy down in Rochester this beautiful weekend! Did I ever mention that I get the best sleep whenever I stay with her? I usually get about nine hours of nearly uninterrupted sleep. It’s wondrous.

We hadn’t exactly decided on a dining spot before my arrival. But Stacy suggested Salute Wine Bar. Naturally, because we are Wineaux friends, this made sense. We pulled up the menu online and it was a done deal!

We arrived at around 6:30pm on a Saturday evening. There was maybe one person at the bar and two tables occupied in the entire restaurant. That seemed a little strange to me. However, the location was a bit strange, too. We parked in the Kahler Grand Hotel ramp because the Salute website (http://www.kahler.com/salute) infers that the restaurant is located in or adjacent to the hotel. However, there was little signage throughout the hotel. We had to ask an employee where it was. “That’s in the Marriot,” was the response. It was out across the courtyard. Perhaps the Kahler Hotel Group is affiliated with the Marriott? I looked it up just now and… Yes.

The restaurant never did get very busy, which was a bit worrisome for a place to survive. I thought maybe they hadn’t marketed it properly. Stacy said that despite the “NOW OPEN” sign, that it had been around for a couple of years. Or maybe it was a slow weekend at the Mayo Clinic, which is within walking distance. Or maybe the weather was just too nice… Whatever the case may be, the lack of people was sad because we absolutely loved our food!

While we were selecting our wine, we were brought a bread basket and poured some olive oil flavored with porcini mushrooms. 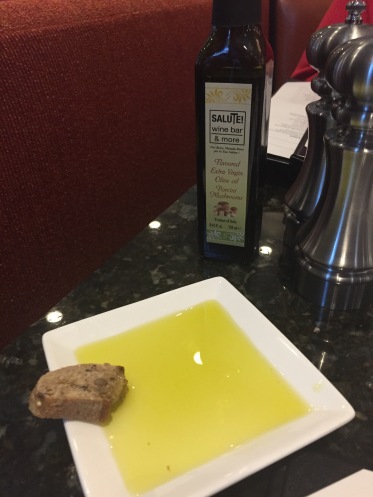 The bread was mostly saved for our appetizer, though. You guessed it – burrata! It’s one of the most beautifully plated I’ve seen – balsamic and olive oil separated on either side of the pieces. It tasted like heaven, too.

What I like about this wine bar is that they offer 3-, 6- and 9-oz pours. Unfortunately, they are not very interesting wines. They were pretty common. We decided to go with a bottle instead. The wine we chose may not have exactly gone with our dinners, but we tend to prefer reds. When I saw it on the menu, I just had to have it! The odd part? Our waiter, though cordial, never offered us to taste the wine before pouring each of us a glass. Every restaurant does that – and this is a wine bar?!

Now to the reason why this wine caught my eye… You see, I met Robert Hall a few years ago. I wandered into the liquor store side of a local Byerly’s grocery store. There was tasting going on! I can’t pass up a free tasting of new-to-me wines. They were Robert Hall’s wines and he was there presenting them. They were absolutely lovely. Many of them were Rhone varietal blends. I started discussing this with him for a bit and he said, “Are you a sommelier?”

Of course, I beamed!

I would say that I probably have more knowledge about wine than the average wine drinker; but I’m no where near sommelier material. But for a wine maker to think I know a thing or two – that’s a compliment. I purchased my favorites that day as well as had him sign a bottle for me.

Because of that experience, I knew that his Syrah would be a solid choice for dinner. I’ve also had very good luck with almost anything coming out of Paso Robles.

For dinner, I was considering the Half Brick Chicken. I loved the options for sides! I could make a healthy choice by choosing a vegetable; but I loved that there were so many from which to choose! To make it easy, I just went with the sautéed vegetables.

Here’s a little story about Chicken Under a Brick… The first time I had this dish was on the day Rob and I got engaged in Tuscany. It’s a method used to make the skin extra crispy because the weight of the brick presses the chicken against the hot pan or grill. I swear it makes the chicken juicier, too. I loved it so much, that a few month’s later, I saw it on a menu at Palomino in downtown Minneapolis and had to order it. It did not disappoint! Sadly, Palomino closed just a few months after that. 😦

I hadn’t had another Chicken Under a Brick for quite sometime. The last time which was the night before we left for New Orleans.  This time, the chicken had absolutely no flavor.  It was just… chicken.

So you can imagine I was a little skeptical about ordering it this time. 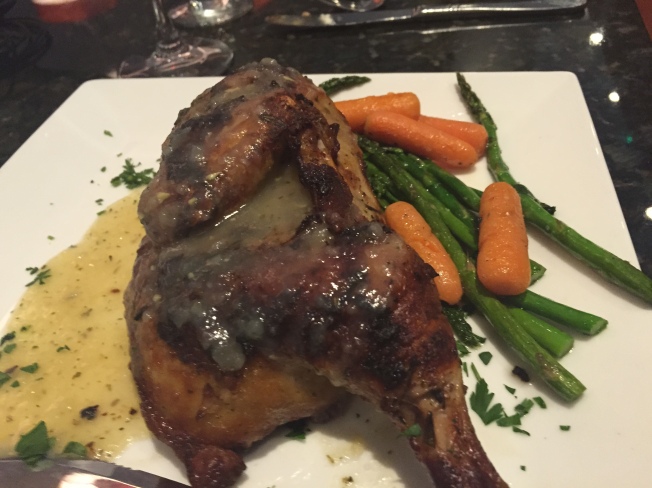 But my chicken was juicy and flavorful! Winner, winner, chicken dinner! Ha! The asparagus, broccolini and carrots on my plate were cooked crisp-tender. It was a satisfying and mostly healthy meal. But there was no way I could eat an entire half chicken!

Stacy on the other hand, chose some homemade gnocchi and added shrimp.

I love blue cheese; but sometimes I find gorgonzola sauces can be too rich. I took a bite and found Stacy’s gnocchi to be perfect pillowy texture and the gorgonzola perfectly balanced. That is a winner of dish that I’d recommend to anyone!

By the time we left, one more table had been sat, there were a couple of people sitting at the bar, another table was seated in the bar area and a small bachelorette party was hanging out there as well. I still couldn’t believe how empty it was for what wonderful food we had!

If you are in the Rochester area, I would recommend Salute. Its’ a hop, skip and a jump from the Mayo Clinic.

We didn’t do dessert at the restaurant, but instead picked some up at Mr. Pizza North on the way back to her place and a had a taste of each of these: 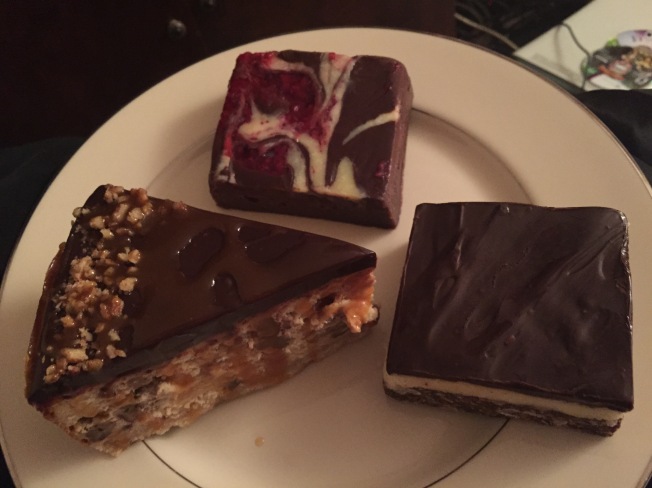 Surprisingly, that is the exact order I preferred each treat. I hadn’t had dessert in a while; so it was a sugar overload. But I savored every bite!

Have you been to a restaurant where the lack of crowds surprised you?