After the accident, I went through quite the myriad of emotions.

But surprisingly, one thing I didn’t feel was anger. I wasn’t angry at driver in the red minivan that never stopped. It wasn’t a malicious thing, just negligent. I just hope that someone is watching over them to ensure that they are more careful driving in the future.

The first feeling I truly felt (besides exhausted) was gratitude. In fact, that night, I purposefully sat down and wrote out all the reasons I was grateful after this accident. These are the words exactly as I wrote that day {with my current comments in brackets}.

Feeling grateful was the most important emotion, I believe. I am so glad it came first. But little did I know, there was a multitude of emotions to follow. Perhaps I’ll describe those will be described in a later post. But until then, here are some photos of my vehicle when we went to retrieve our belongings at the salvage yard. Of course, it was totaled.

From these angles, it doesn’t looks so bad:

But let’s take a look at the entire vehicle…

When you look at the passenger side, you can see why Rob was the one who was injured.

I recall going in the ditch, the impact, and then rolling over counter clockwise. The first impact was on Rob’s side. That’s were the bulk of the damage is. 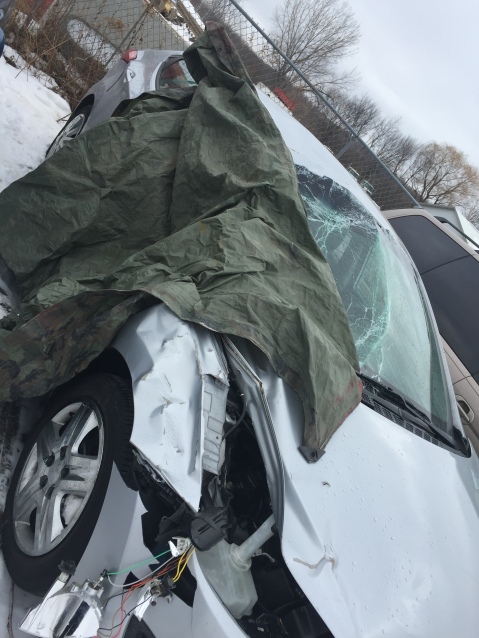 The tarp is on the vehicle because the passenger side door glass shattered completely. They also ripped off that door with the jaws of life. That door was now sitting across the front seats. 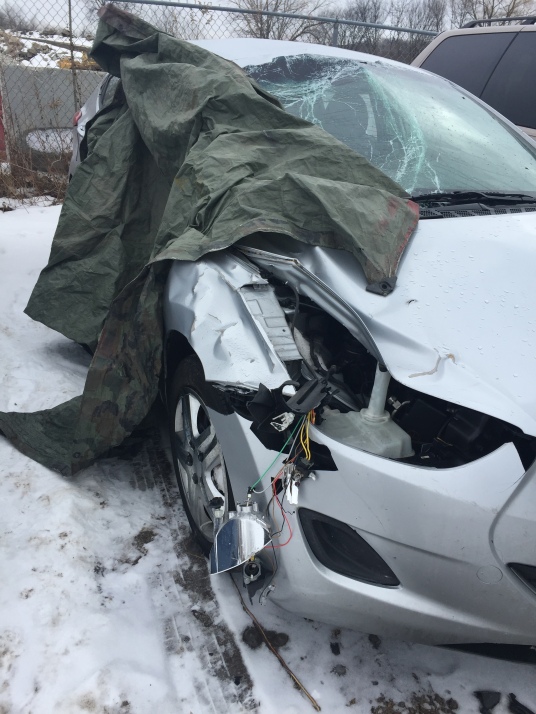 Believe it or not, I found a new car already. It’s a hard decision to make when the insurance company doesn’t offer you the total amount you owe on the totaled car. Luckily, a local Mercedez dealer ship wanted to get a used Hyundai Elantra off their lot! It’s hard not to want the same car after you feel it saved you.

Although a more gray than my silver one, this Elantra is two years newer, 5,000 miles less, $1000 less than what I owed on Sharkie. I thought I might be nervous getting into it to test drive. But it felt natural. And now I have heated seats. Silver lining.