A couple of week’s ago, our friend Monkey notified us that my favorite beer was now back in stores. We picked some up right away!

Then we found out that there was a Central Waters Tap Takeover at the Adam’s Street Pub in Green Bay, where we were headed to see family for the holidays.

But alas, when we arrived at the pub at around noon on December 26th, it was closed and we had to lunch elsewhere.

After lunch with the boys at the Green Bay Distillery and watching White Christmas on DVR { which may have included a late afternoon nap}, I wasn’t sure if I wanted to go back downtown to Adams Street Pub for some Central Waters beer. 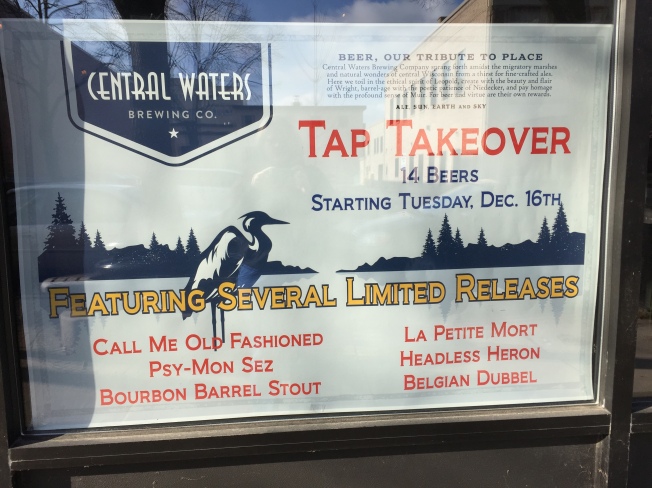 Yes, you read that correctly. There was a tap takeover by my favorite brewery; I was only about ten miles away; and I was considering doing “the usual” instead.

But it was dark and I was still groggy from my nap. (Poor me!) I asked Rob what he wanted to do. Going up the road to Townline for a bite to eat sounded so much easier to both of us.

But I gave it more thought, weighed the options, listed pros and cons…

I came to my senses. The pros outweighed the cons. And the con was a stupid one. Nothing said we had to get stupid drunk. I’d rather have a couple of my favorite beers and enjoy them! So we headed back to Adams Street Pub.

And I was happy to find that *all* of the tap takeover beers remained on tap!

Just look at those beautiful heron taps lining the bar!

I had to start with the Call Me Old Fashioned. It’s very limited and a beer that just screams “Wisconsin!” Anyone who has grown up in Wisconsin and moved away eventually comes back and drinks an Old Fashioned with family when visiting, even if they never really drank them before.

Everyone has an idea of how a a true Old Fashioned should be made. But there are several variations. When in a Wisconsin tavern, you should order them this way:

Old Fashioned Mix can be found in stores in Wisconsin, but you can also make it yourself. {Although, I don’t know anyone who does that.} They are often garnished with maraschino cherries {and sometimes olives}. Customizable to your tastes, I’d say.

Here is a Central Waters’ beer with an Old Fashioned twist: 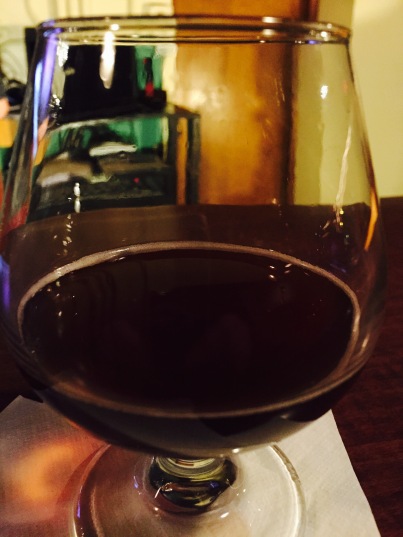 Oh boy was that yummy.

Did it taste Old-Fashion-y? I’m not quite sure. But I liked it. A lot. But I also like barrel-aged beers. So there’s that. I loved the concept of this one. And the name.

Because I was driving, I allowed myself only one more beer. It was going to have to be my fave… I had finally had the opportunity to have it on tap!

And I was not disappointed. I savored Every. Single. Drop. Rob went with the Headless Heron Barrel Aged Pumpkin Spice Ale. I totally forgot how wonderful this beer is!

One sip and I tasted all of those spices and was whisked back to fall. Mmmmm…

Our main purpose for visiting Adams Street Pub was to sample the Central Waters beers. However, because the ones we chose were high in alcohol, it was necessary to get some food in our tummies, too.

While on beer #1, Rob ordered us these:

I have to say that this cup of Pub Cheese was one of the best appetizer values I’ve seen. I normally don’t care for cheese “sauces” because they make me think of something that comes out of can. But I did like this one. What I liked even more were the pretzel bites! Think of one of those big, soft pretzels, but in little one-inch portions. Now think of them tasting even better. The last big pretzel I had at Lambeau Field was overly salty. These were utter perfection. Each bite had that slightly crisp outer pretzel crust with a warm, doughy inside.

I wouldn’t let them go to waste. When Rob was finished, I ate Every. Single. Last. One. For that reason, I was getting full.

I had originally decided, once and for all, to get the Friday Fish Fry. But I was way, too full for that now. Besides, the portions were huge!

I had also been considering building my own burger with 3yr cheddar, garlic ailoi on a pretzel bun…

But that, too, seemed like too much food. Instead, Rob suggested that we split the Breakfast Burger, substituting fries with cheese curds. Splitting something sounded like a great idea to me!

Only, as Rob was placing the order, he also decided to order this:

His plan? We would each take a half of a sandwich and he’d eat the onion rings, since I’m not a huge fan. So. Much. Food!

Almost everything about the Breakfast Burger and Gourmet Grilled Cheese was heaven.

First: You had me at Pretzel Bun, dear burger. Then, when Rob split it in half, the runny yolk spilled out. I was in love! I passed my bacon pieces over to him and delighted in the juiciness of the burger.

The grilled cheese was nice and melty and perfectly buttered and grilled. You are asking how one could mess up a grilled cheese? While I’d agree, I’ve also had bad ones. And that’s just wrong.

But there is one thing that I did not like about these two sandwiches. And it might surprise you.

It was the tomato jam.

All of the tomato jams I have had in the past were savory. This one was sweet. It could have been strawberry jam, for all I could tell. It was overpowering. I had to scrape it off. It it weren’t for the tomato jam, this would have been a practically perfect pub meal.

And for the record, Adams Street Pub does have a lot of beer and whiskey options!

Thank you @CWBrewing and @AdamsStreetPub for putting on the Tap Takeover. Thank you very much. Now, to convince my husband to whisk me away to Amherst, Wisconsin next September for a little birthday at the brewery. 😉

Have you had tomato jam?

Was it sweet or savory?

Did it work with what you were eating?