Yeah, one day I’ll get off the books on Fridays. It just seems this is where they fall… Here are the five latest books I’ve finished.

The Couple Next Door
by Shari Lapena (fiction) – toss up 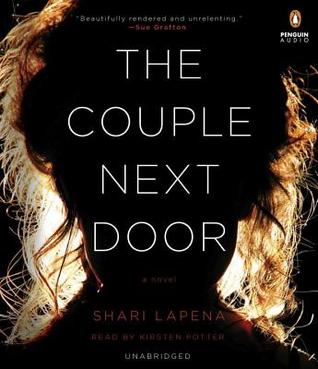 I listened to the audio version of this book. I found the narrator’s voice a bit annoying; but really, it probably worked for the genre. It was entertaining, but not something I’d say is a must read that you need to go and check out immediately. I liked it enough to finish it, but I’m not sure I’d recommend it. Maybe reading over listening to this one would have been different for me.

As usual, unless it is a personal friend who has recommended a book, I can’t figure out where I got the idea to it. To be honest, I don’t always “get” poetry. Many of these poems seemed very personal to the author, too. So it almost felt like I was the odd one out. But, there were a few I really enjoyed. And sometimes, I imagined them being put to music and that made those seem a bit more enjoyable, too. Because isn’t that what songs are – poems set to music?

BossyPants
by Tina Fey (non-fiction) – worth a read/listen

I love listening to comedians’ books on audio; so this was no different! It passed the time nicely on commute, Fey forcing me to laugh out loud more than once. I especially liked her section on photoshopping. She compares it to make-up, that we all want to see the best version of ourselves. And that magazines aren’t fooling anyone, so what’s the harm? The only one fooled is your 80-year-old grandma who thinks that really is Sarah Palin posing with a machine gun in an American flag bikini. Fey also predicts that we’ll one day be touching up all of our own photos of ourselves. This book was published in 2011. Um, yes, you were right, Tina. You were definitely right.

They May Not Mean To, But They Do
by Cathleen Schine (fiction) – worth a read

This book is a work of art; but I had a hard time reading it – not because of style of writing or a lack of plot – but because of the content. I didn’t want to pick it up again and endure the lives of the characters. I didn’t want to feel what it’s like to age and or for your kids to mean well, but not really come through the way you might have hoped.

I read this book described somewhere as a “different kind of coming-of-age story”. Coming-of-old-age, that is. Although it is inevitable for us all, I don’t want to think what this will be like when my own parents and in-laws get to those stages, nor do I like thinking about what it will be like for me. Schine features both perspectives here. I was a bit overrun with emotions reading this.

I don’t always do well with the classics or what feels like overly-flowery language to me. However, I think watching Downton Abbey helped set me up for something written in such times past. I’ve never read Joyce before and I’ve learned that this is actually the last short story in the book Dubliners. Although it was a fine story illustrating what may have been life during these times in Dublin, I wasn’t sure where it was going… and per the usual, I didn’t really think much of the ending. But an ending I love is quite rare.

Is there a book that was difficult for you to read, but you still enjoyed and appreciated it?