On this trip to Chicago, I planned to explore some different neighborhoods! We’ve always stayed in the Near North/River North area close to attractions, but that really isn’t necessarily when you have the “L” train to get you everywhere.

Still, that first day, we had to stick close to the hotel…

On our first morning, I was on a mission to find a cronut – you know, that famed croissant-doughnut hybrid originally created in NYC. I first had one, at Dunkin’ Donuts of all places, in Arizona. We don’t have DD in Minnesota and there is supposedly only one place that offers a cronut in downtown Minneapolis. So I gave the hunt a go in Chicago. Based on this list, we tried West Town Bakery, not even a block away from us in the in the Acme Hotel, {none in sight} and the Alliance Bakery {pastries and macarons only} that day and finally settled for the nearest Dunkin’. ‘

I asked if they “any of those croissant donuts.” They only had two left! Score! The flavor is Strawberry Shortcake. 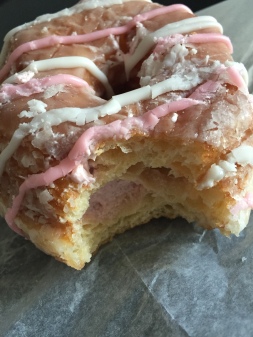 So good, but almost a little too sweet!

It was before we ate our cronuts that Rob was starting to feel not-so-hot.

In fact, he took one bite of his and it was all he could muster. At this point, I had finished the book I brought. I told Rob that he should relax for a bit and instructed him to drink the water bottles that our hotel left in our mini-fridge.

That’s when I went out in search of the bookstore I posted about here. I spent some time there, wandering a bit around the neighborhood Chicago afterwards, before picking up a few provisions {aka 6-pack of water and some chippy-chips to cheer Rob up back at the hotel}.

He eventually started to get hungry {good sign!}, but we decided to play it safe by sticking near the hotel. We chose a restaurant that was not on our original list but that we spotted on the way back from Dunkin.

You bet we were! So we pulled a seat up to the bar at Copper Fox Gastropub, a newer restaurant now open in the Courtyard Marriot. Look at all of these local beers on tap! 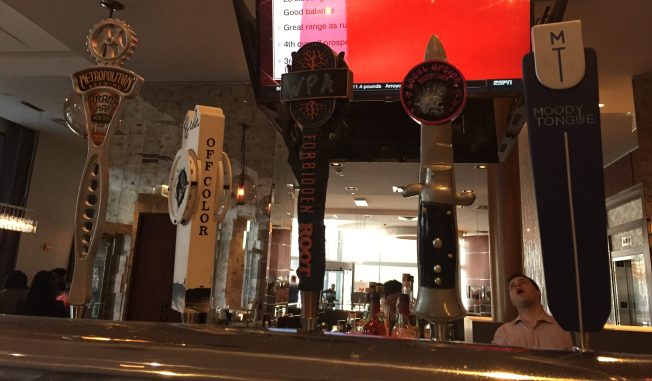 Chicago doesn’t seem to have as big of a local craft beer scene as Minneapolis. You’ll see Revolution and Half Acre pretty much everywhere, but here were others! Many of which we hadn’t hear of before!

The bartender was the perfect resource for our beer questions. She was as excited about these beers as we were!

Are all of these beers local?

I don’t normally order regular old Pale Ales, but I loved the sample. Done deal! {You know how I love the unique stuff!} Rob got all up on that IPA and detected a fruit flavor in it, so he inquired. “That’s nectarine!” So. Good.

We researched a few of these breweries in search of their taprooms. Forbidden Root seemed to be a bit off the beaten track, so we likely wouldn’t have made it there this time. Moody Tongue had a tap list that had us drooling – Bourbon Barrel Aged Chocolate Barley Wine! Shaved Black Truffle Pilsner! Alas, their taproom, set to open this spring, was not yet open!

I don’t know if you’ve noticed {maybe I do because I post about what we eat}, Rob has lately been ordering either two sides or an app and two sides, rather than a traditional meal! Such was what he did this day, too. These chips came out first…

“How is it that YOU get the executive chef to cook all of your food today?!” our bartender smiled as she walked passed, coming back from the kitchen. {The other chefs either hadn’t come in yet or were on break!}

Rob was debating between the fries and those rosemary potato chips, finally going with the chips at the recommendation of our bartender. The chips did not disappoint! While you could see rosemary seasoning on the chips, the flavor was such that I thought the oil they were fried in was infused with it, too. I helped myself to nearly half of those chips {aka Rob shared them with me.}

This mac and cheese was oh-so-creamy – you know, that perfect consistency. Rob commented that some dishes like this are just cheesy without seasoning, but this one had some flavor. Still, Rob could barely eat half of it!

When I ordered my dish, I asked our bartender “Would you recommend the Fried Avocado Salad?” When her eyes got wide, she smiled and she nodded slowly while saying, “Mmm-hmmm…” I was sold. 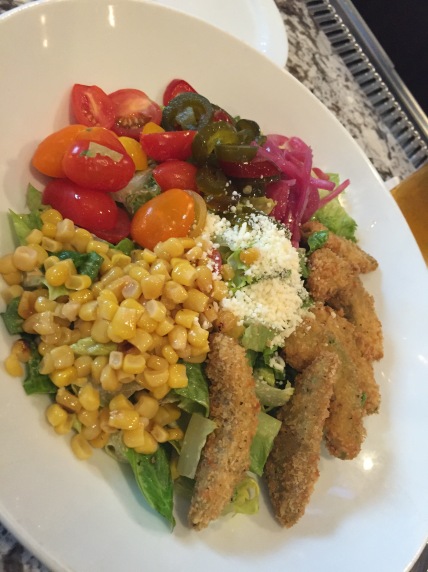 Wow. Just wow. All of these flavors came together in such a unique way! Candied jalapenos? Who knew that you could have sweet and spicy in that kind of combination? Alone, they would just be too much, but mixed in this entire salad with the pickled onions and fat from the avocado… was quite the flavor combination. As pointed out by our bartender, the breaded avocado is not actually deep-fried, so don’t feel so bad about this addition!

I’d come back here and try so many other things on the menu! That would include the scallops, salmon and risotto based on the way they are described. One diner’s Kale Caesar looked fantastic with its block-sized croutons and the other couple at the bar was swooning over the Biscuits with Honey Butter. There was something special about them {the biscuits, not the couple}, that was also noted on the sidewalk board; but I can’t quite remember.

After lunch, with our tummies full, we headed over to Eataly of all places. It was on our list of things to do and close to the hotel. MAN, THIS PLACE IS HUGE! A city block of Italian craziness! Kitchen utensils, espresso bar, wine shop, wine bar, cheese shop, pasta bar, pastries, restaurants, salami, beer bar… It was all soooo… overwhelming!

Here, I can imagine that the food would be absolute deliciousness hailing from Mario Batali, but it would not be relaxing. I’m so glad that we had lunch beforehand and here we could just wander. Rob went in search of a bottle of wine from the vineyard in Italy where he proposed {he never found it}, while I discovered this:

Yes, a Limoncello Bar! I just had to try the raspicello and the peachello. Both tasty, but I think I’ll stick to my traditional limoncello and sister citrus-cellos, like the ones we sip after dinner at Sul Lago.

And just look at all of meats and these cheeses!

Or, if you’d prefer, go to the fresh-made Mozzarella Bar where you can watch burrata being made by hand! {Was I really glad we ate lunch already?!}

On our way back to our hotel, after wandering around Michigan Avenue a bit more, Rob made a sound that I can’t describe, but can always decipher – it’s the one when he sees a car that he lusts over…

Yes, a Lamborghini. I never spot expensive sports cars on my own. {Well, except for the one with Batmobile cones when we were in Beverly Hills, but who could miss that?} As much as he goes ga-ga over them, Rob laughs and says if we had money to buy one of those, we could pay off our house, buy a new one and travel!

As for dinner, I had all of these great restaurants picked out in great new-to-us neighborhoods. Rob tends to crave Italian wherever we go (like here, here, and here.) Since he wasn’t feeling all that hot, I let him choose. Spaggia is always on our list to try in Chicago, but the price tag is hefty. The chef from Spaggia has a newer restaurant called Monteverde in the West Loop; but Rob wanted to stick close to home base.

So we stopped for a quick aperitif at Side Door to discuss our Italian options. At least we had narrowed down our choices! 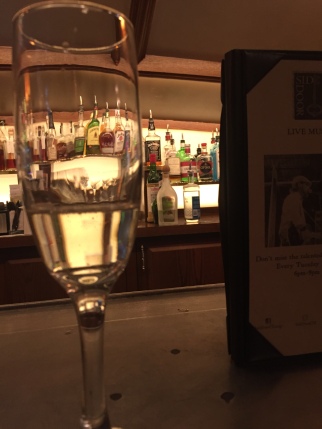 We were seduced by the perceived-elusiveness of Side Door, but were not all that impressed by their offerings for their price and service. Instead, we’ll elect Pops for Champagne next time for some stellar bubbly and service. But do not worry, Pops was close enough to our hotel that it was not missed on this trip!

Our final choice for Italian was La Stanza Ristorante at Labriola. Labriola, as it so happened, was on a list I made of best burgers for Rob! But Italian was his go-to that night.

I’ve read that while Chicago Deep-Dish pizza is a must-do if you are an out-of-towner and have never had it before, Chicagoans in general tend to go for the lighter, thinner crust on most occasions. There was a Chicago Deep Dish on this menu, on top of which they plastered their “best-in-town” accolades. “Sure, they all say that,” I thought. This really skinny guy at the bar ordered one all for himself. And to be honest, it looked insanely good. That is coming from someone who’s had Chicago Deep Dish twice and was underwhelmed. If I were to try it again, I would definitely do it here!

Instead, I went off their separate Neapolitan Pizza Menu… 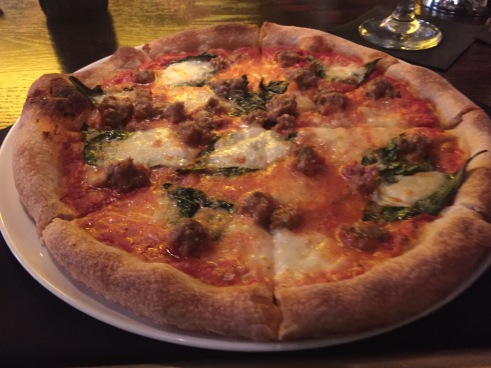 Chewy crust, bright SM tomatoes and the perfect balance of sausage and basil. That price wasn’t so bad either! I ate about half of that pie, which was way too much… and brought the rest back to our hotel. Rob did not come here for a burger. It was all Italian… 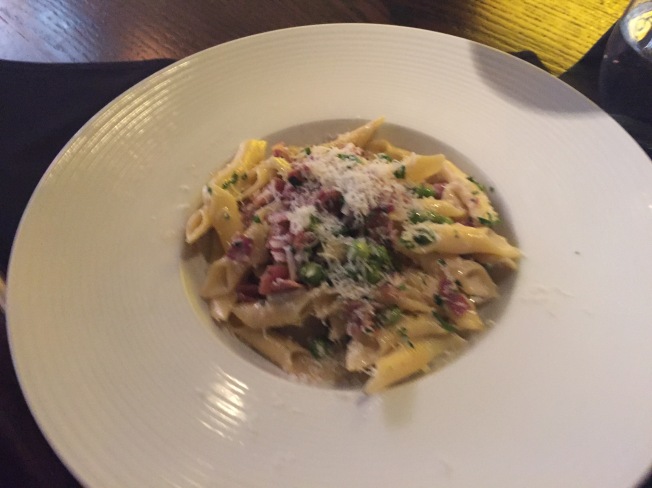 Horrible photo, but the pasta was perfect in every way. Those little hand-rolled penne are what all good fresh pasta should taste like – and perfectly al dente. There was a little too much prosciutto for my liking and a little too many peas for Rob’s; but having too much of anything is rarely a complaint in a bowl of pasta, amiright?! Still, Rob’s tummy could only handle half of this.

All-in-all, we still had a great day out-and-about around the hotel. But Rob’s stomach did not fair well throughout the rest of the night, which made for a very interesting next day… our anniversary…

To read about the our late night arrival in Chicago, click here.