My Australia trip recap wouldn’t be started without a post on wine. I’ve always loved the advice to drink wine in Wine Countries. Australia is no exception. While we had hoped to discovered some good craft breweries Down Under, we also knew that they haven’t quite caught on to the craft beer craze, just yet.

And such was the case. For the most part, Aussie beer didn’t live up to our snobbish craft beer palates. But there were a few exceptions! Like this one, for example:

Not to mention that wine is significantly less expensive, whether you buy it in a store or order it in a restaurant. Sitting down to a $9-per-bottle of mediocre beer? No, thank you. We saw a case of Corona for $75! {We were explained later that is because it is an “Executive Beer” that caters to a specific market. Here we thought it was that it was the cost to travel so far from Mexico…} So, for the most part, wine tended to booze of choice. Especially, the key varietal in Australia:

{I took the above photo of the Watershed Shiraz for my Wineaux friends, because it used to be a wine The Traveling Vineyard carried! I was so excited to find it again.}

The funny thing is – and I didn’t realize it until later in the trip – that I didn’t even need the one item I always travel with that remains in my luggage:

…because the Aussie wine bottle closure of choice is the Screw Cap:

I don’t think I’ve written about screw caps on the blog before, which is funny because I did intend to, as noted in my my first Wine Wednesday post! Though I used to teach about screw caps at my Wine Tastings. There is (or has been) a misconception about screw caps because they tend to give the impression that the wine is cheap. But such is not the case today! There are reasons why screw caps are preferred, by wine makers and consumers alike. Sure, it does take a bit of the romance out of opening a bottle, but if it’s a great wine, who the hell cares? There is a great article about the pros and cons of corks vs. screw caps here.

I didn’t really pay attention to wine closures of bottles on store shelves because I was too busy selecting the next bottle! But I will tell you that every single wine we bought in Australia had a screw cap – inexpensive and expensive wines alike. Then again, all of the wine purchased was Australian. {We prefer to drink locally when we travel!}

Such was the case in restaurants, too. All of the wines we ordered came in screw capped bottles. But I was too busy taking photos of labels to remember the wines. I didn’t think to get a shot of the full bottle at dinner! 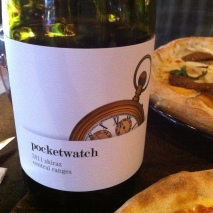 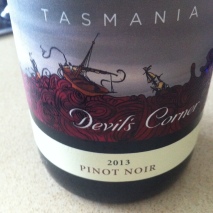 There was just one exception!

We ordered a bottle of wine with a cork in it when we dined in an Italian restaurant in Melbourne. However, there were only Italian wines on the menu. This is the only time in which we did not order Aussie vino: 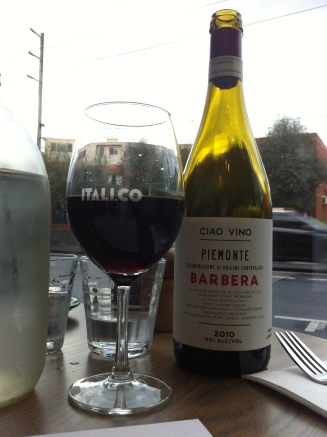 There was one time that we gals ordered an Australian Sparkling Wine while the boys enjoyed some brews. And I do remember the sound of the cork popping… because I just love that sound! Most most bubblies need that cork to sustain the pressure inside the bottle.

So there you have it. I didn’t have to use my corkscrew one single time the entire 17 days of our trip. And we had more than a few bottles. Most of it was very good. Only one was so bad that we dumped it out. {Incidentally that was the least expensive wine we purchased the entire trip.} We quickly learned our price point. Still, it was so difficult to choose in the store! I knew the regions that were supposed to be known for the best Shirazes. But we wanted something to wow us! And we hadn’t found it yet.

So, on our last night in Melbourne, before flying to Uluru where our Aussie friends told us everything would be ungodly expensive, we stocked up on some vino for the trip. We walked into a Bottle Shop and the guy, who looked like the owner, saw us wondering around aimlessly and asked if he could help…

And you know what? These were the best wines we had all trip. It pays to ask the locals.

How do you select wine?

Do you care if your wine has a cork or screwcap?