I would have never known about SW Craft Bar had I not seen it on Groupon. I had never known there was a craft cocktail, beer and burger bar in Lowertown St. Paul. We absolutely love The Bulldog Lowertown, known for its excellent selection of craft beer. But it’s nice to know that there are some other options in the area, too.

So when I saw the Groupon offer for two flights of beer and two burgers (or sandwiches), I thought that the deal had Rob’s name written all over it! I snatched it up.

There is a good reason why there is a Groupon out there for SW Craft Bar. It needs a little advertising because it isn’t very well marked. It’s located in the Kellogg building and we had to walk around a bit to find it after parking.

The interior surprised me, too. It was about 5:30pm on a sunny summer afternoon and it was so dark inside! There were very few people there, too, despite that it was Happy Hour, which I’d like to point out includes more than your average bar food! Check out the online menu.

Another thing to note is that while SW Craft Bar may not have the as many craft beers on tap as, say, the Bulldog Lowertown or The Happy Gnome, they do have a varied selection. There weren’t a lot of my favorite styles on tap, which forced me to order outside the norm and try something new! It wasn’t until now that I realized how the growth of my beer palate has stunted. {Huh?}

Here were the selections available when we were there:

{The beer list is ever changing. I love that!}

I love when bars list what is “on deck” so you know what kegs are waiting to be tapped. It’s a great way to bring customers back to try something new. Every single one of those craft cocktails {to the right} looked mighty interesting to me, too!

Here was the flight I put together and my thoughts on each beer:

Here is where I’d normally suggest that if you are doing beer flights with someone else that you select all different beers so you can double the number of beers you get to taste! But there weren’t eight beers I wanted to try. And I think we were both feeling a bit selfish.

For that reason, you’ll see two repeats in Rob’s lineup:

Our deal included a choice of a burger or sandwich.

Rob, of course, chose a burger! 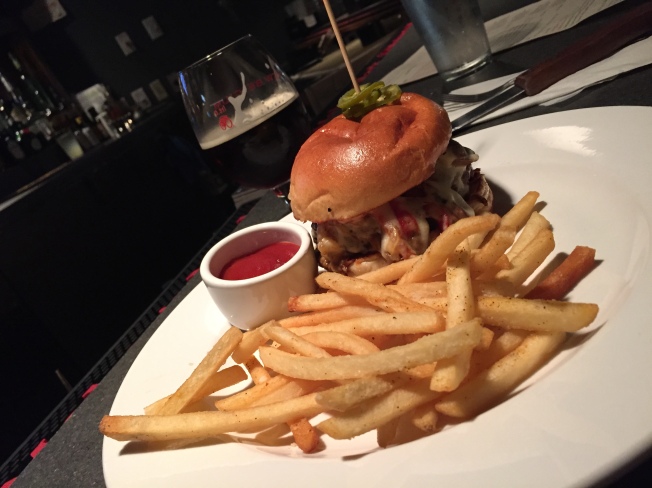 All sandwiches are served with a side salad with a choice of ginger vinaigrette or spicy sesame dressing. You can upgrade to fries for just a buck, which is exactly what Rob did here. The fries were pretty basic, but well-seasoned. Rob finished them all before moving on to his burger, which he said wasn’t really seasoned and that the flavor was in all of the toppings. That kind of makes sense because if you read the description, there is a lot going on there! The bun was nicely toasted, too.

One thing that I didn’t realize until his burger came out was that he was never asked how he wanted it cooked. It looked almost well-done to me, but Rob said it was about medium. {We both prefer medium rare.} For the record, Rob did not get the refried beans on his burger because he is allergic.

All of the sammies sounded so flavorful, that I couldn’t decide at the moment. I enlisted the help of our bartender. He noted two of his favorites and I chose one.

I loved this sandwich! My bun was perfectly toasted, to the point where it was crunchy without being hard. Rob took a bite. Whoops! I forgot there were refried beans on this sandwich until I started writing this post! However, that night I did note that they looked like black beans {which he can eat} rather than the usual pinto beans that are often assumed when I read “refried”.

He didn’t think the pulled pork had any flavor or seasoning; but I disagree. It was juicy and tender and not as salty as how mine tends to turn out at home in the crockpot. And I loved the mixture of flavor from the toppings. This one was right up my alley! I ate the entire thing.

Rob finished off the night with a glass of the Odell Stalwort English Strong Ale, which neither of us have had before. In fact, after tasting how smooth {and dangerous at 11% ABV!} it was, we looked it up on both Beer Advocate and RateBeer, neither of which have ratings yet. We’d give it a high score if we were so inclined to post on those sites.

I could see SW Craft Bar as a great place to get a beer {or flight!}, cocktail or bite to eat before after an event in Lowertown. In fact, their website boasts free shuttles to events at the Xcel Center, Ordway or Fitzgerald Theater. {Just call in advance for times.}

It would also be a great alternative to other establishments in downtown St. Paul when everything seems a little too packed. Just be willing to walk a bit or take said shuttles. You just might try something out of the ordinary!

Do you like to do flights of beer, wine, cocktails or bacon?

If so, how do you choose if they aren’t pre-determined?