Yes, it’s true. It’s been a while since I’ve posted about dining out.

We recently returned to a new restaurant in our area. We had only been there once and we couldn’t remember what we liked, didn’t like and wanted to try next time! It kind of all mixed together. I even texted our friends who were with us on the first visit and they couldn’t remember either. Maybe it’s safe to say that the food was not memorable?!

In any case, here goes… I’m going to attempt to get back into the blogging game… or help my memory.

Yankee Tavern is the new South of the River overhaul of the old Valley Lounge, an old dive bar in Eagan we stopped in a time or two. Let me tell you, they put some money into this place to revamp it!

The prices are a bit high for the area; but I imagine it’ll take some time to turn a profit. Also to note… all items are à la carte. No sides are included. There are no prices online, so I can’t offer those up on the blog from memory.

There’s no real “about” information on the Yankee Tavern website at the time of this writing, but a few reviews and Facebook posts from friends and foodies indicated that this place is known for brisket, fried chicken and southern comfort food. But the menu truly is extensive.

When Rob and I went with the girls, we ordered wide variety of food.

The girls’ general consensus is that these sandwiches were just okay, nothing anyone would order again. I think we agreed the Thin Sliced Sea Salt Kettle Chips were good as was the Blue Cheese Pickled Onion Cole Slaw. I know someone liked the Jalapeno Corn Bread with Salted Caramel Butter…

… but I found it to be a little burnt and dry.

I bet you’d never guess that Rob ordered a burger: 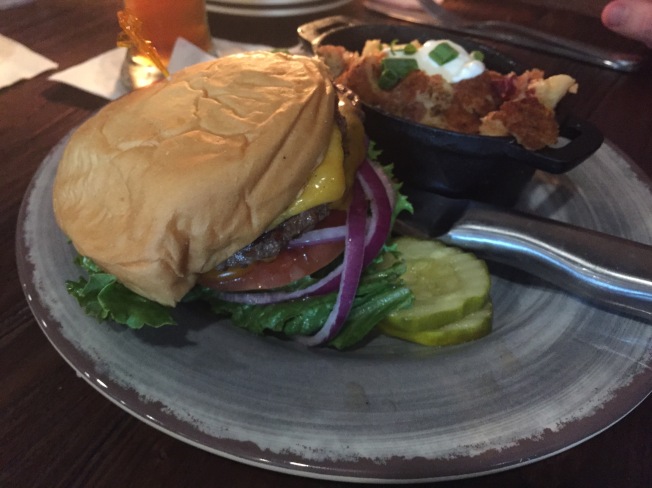 Neither of us remember which burger it was. He said it was fine; it just wasn’t seasoned at all. The side he ordered ^^Grilled Garlic Kiev Butter Smashed Potato. Also, just okay. I think he was hoping for the unforgettable, mouthwatering smashed potatoes that we had at Heirloom a month or so before, but those boots are just way too big to fill!

I went straight in and ordered according to a recommendation I saw online:

The fried chicken was juicy, but the batter had no flavor, nor seasoning. I did get the regular crispy style, instead of the other flavors offered, though. Still, crispy fried chicken at your good ol’ Popeye’s and KFC still has flavor! The red beans and rice were good, but there was definitely way more rice than the red bean concoction, making it seem dry overall.

When Rob and I went back to give this place another try, we forgot all of this. All we knew is that it was close to another event we were attending and we should probably order something different.

I remember eyeing the “Bowls” on the menu, specifically the Thai Peanut one, the last time we were there. Though on this day, it was particularly chilly and the American Bowl just sounded comforting: 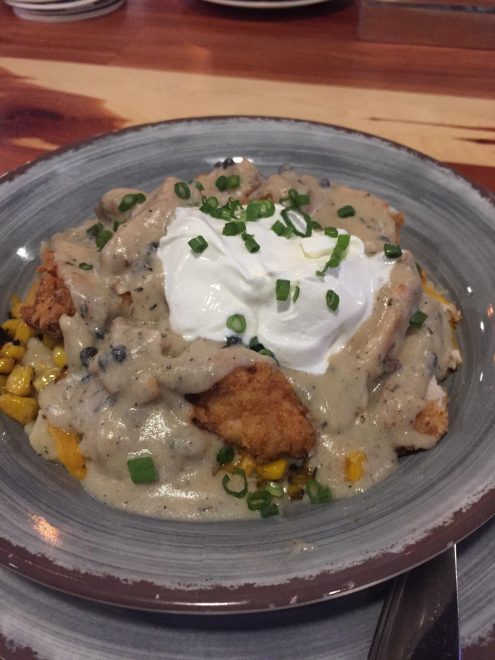 I liked that the corn was roasted and the gravy had a yummy peppercorn flavor, but biting into whole peppercorns started to get old! The chicken was nice and juicy, I just wished it would have been a bit crispier. The mashed potatoes weren’t completely mashed, which I don’t mind some chunks from time to time; but there were a lot of them. One of them was even under-cooked.

But then we found the star of the show:

It seems the brisket is where it’s at here! Rob loved the brisket along with the way the ciabatta was nicely toasted and the giardinera really set off this sandwich for that little kick that’s to his liking. He added the Fried Shallot Haystack as a side. These were very good! But I find them strange as a side rather than something you’d use as a topping.

Yankee Tavern is still in it’s opening months, so we’ll need to give it some time to work out some kinks. It really seems to be hopping thus far, though. It also appears to be a Viking Football hotspot. So consider timing if you plan to venture out on game day! Yankee Tavern serves breakfast, lunch and dinner.