When going north of 35W and exiting on Lake Street, instead of going left toward Uptown, take a right. You’ll find a whole new world of ethnic grocers and restaurants. It took us years for us to discover this eclectic little neighborhood.

Yes, I had always heard of Midtown Global Market, but it took us a Groupon to get there. It wasn’t exactly a Groupon {that’s my generic term, like people use Kleenex for any brand of tissues}, but I believe it was one of those radio station half-off deals, where you pay $25 for two $25 gift certificates. This gift certificate was for us to try out a new brewery – Eastlake Brewery.

Our first visit was about a year ago.

We had no idea that Eastlake Brewery was located inside Midtown Global Market until we found parking. Nor did we know what the market was like! I could spend hours in there checking out all the little stands of goods and groceries from around the world, some even handmade by locals. And food – The Food! You can get almost any kind of of cuisine your heart desires here, much that is suitable for take-out, too.

After a bit of wandering we made our way to the brewery located in a corner of the market. It’s a small little taproom area. We pulled up a seat at the bar. I do like that they list beer pairings below each beer… and that many of the foods are ethnic and can be found in the Midtown Global Market! {Like many breweries that don’t serve their own food, bringing in your own is not only allowed, but encouraged.} 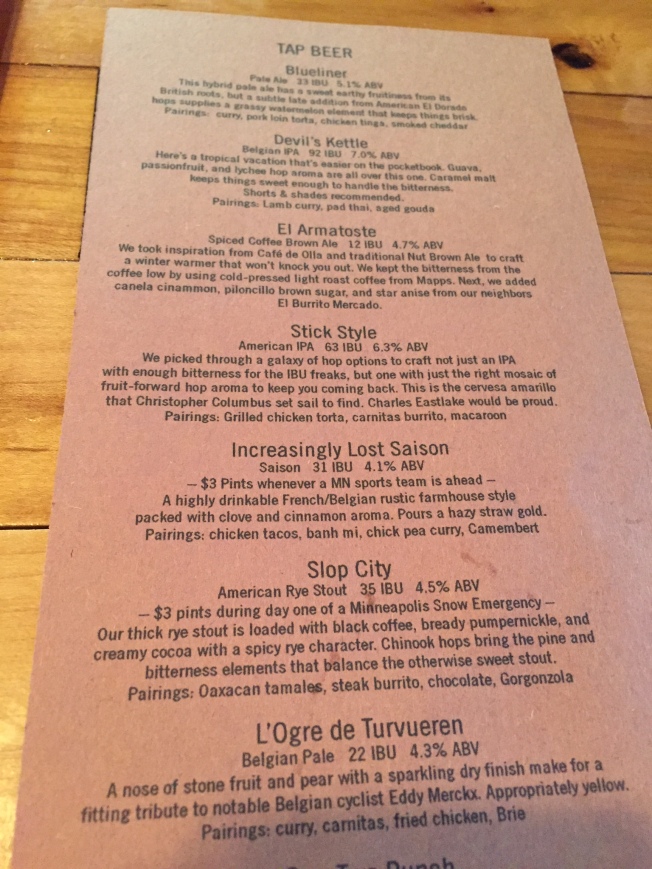 I will be 100% honest and say that the first two beers we had were absolutely horrible; but I genuinely cannot tell you what I had. Looking at the year-old menu above, I’d think I would have ordered the Slop City American Rye Stout, but that doesn’t look entirely on par with this photo I took:

I remember having a hard time choking that beer down, while Rob attempted to order a second one, and thinking, “How are we going to spend $25 here?!” Luckily, Eastlake Brewery offers a few menus from the vendors within Midtown Global Market. 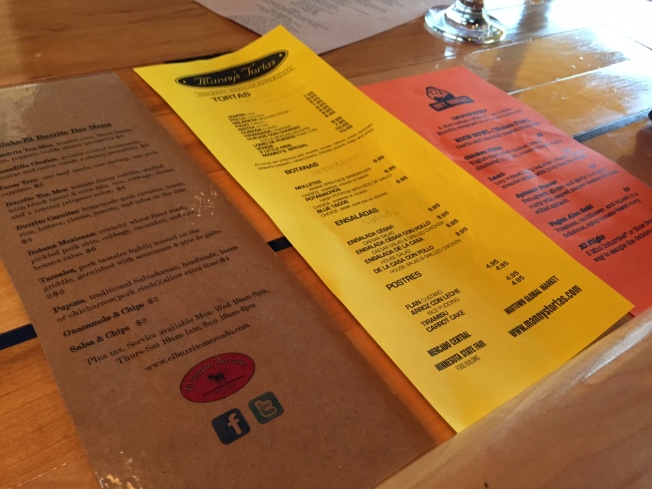 Just place your order at the bar, the bartender will call it in and said vendor will deliver! I have been eyeing that Indurrito for over a year now…

The food is added to your Eastlake Brewery bill. {At least that is how they did it a year ago.} So we were able to spend that $25. Now that we were there, we just had to try the city-wide famous Manny’s Tortas. We needed to know what the fuss was about some sandwiches…

Dear God, “they” were right! 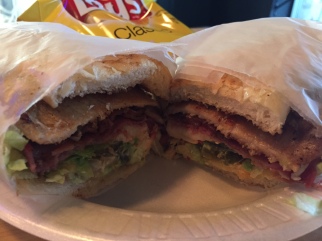 I’m sure I had a Polla Torta and Rob most likely had the 3 Little Pigs. On other occasions, we had the Huevos con Chorizo and the Lomo de Puerco. All were fabulous. The bread is sensational alone, but each torta is prepared with cheese, tomato, lettuce, onion, avocado, jalapeño peppers, refried beans, chipotle pepper and mayo, as well as served with a side of chips.

Rob orders his torta without the refried beans {you know, that allergy thing} and it still tastes fantastic. I know many Minnesotans try to stay away from spice; but if you can, please leave the jalapeño peppers on your sandwich. It’s this gentle kick of pickled jalapeños {they are not as strong as raw} that really makes the torta, in my opinion!

This Manny’s Tortas find made our thought of using up our second Eastlake Brewery certificate much easier.

However, when we went back to Eastlake last summer, we were sad to find that they would not allow us to use your certificate on food. We would just have to find a beer that we could swallow.

They really upped their game!

We tried several beers this time around and loved them all! 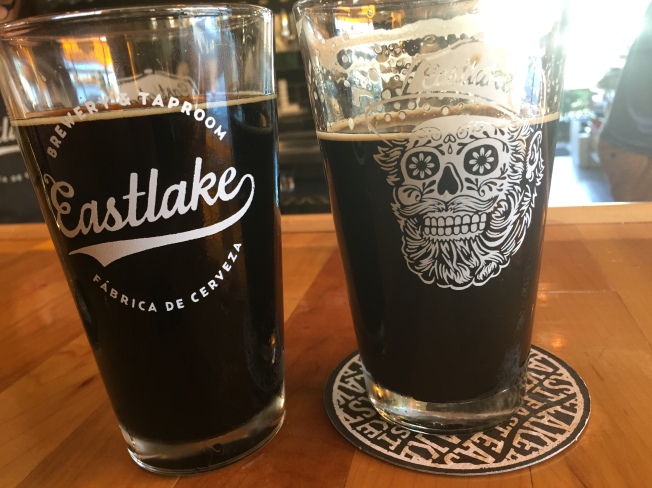 I’m pretty sure one of the beers pictured above is the Almond Milk Stout {right?} and the other {left?} perhaps is the Nicollet Mauler Black IPA. {I love the name!} And then they had another thing I love on tap – kombucha! 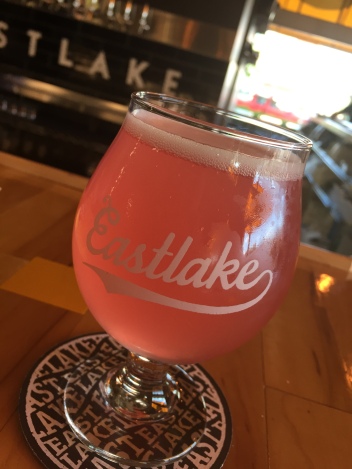 So pretty, no? We still did have our fill of Manny’s Tortas that day, even if it wasn’t included in the deal. 🙂

I am so glad that we had that second certificate that forced us to give Eastlake Brewing another chance. In fact, last month, some friends invited us to join them one Sunday because they received a Groupon as a gift. We gladly accepted their invitation. And the beer and kombucha, again, was very good!

What we really wanted to do that day was try out the locally acclaimed Rabbit Hole which is located just off Midtown Global Market. However, it is closed on Sundays! 😦

Instead, we had our normal fill on Manny’s Tortas. {By the way, it’s right next door; so just get off your ass and order it at their counter. Manny will bring them to you!} It’s really hard not to pass these up. But I’m still hoping to try an Indurrito at Hot Indian Foods soon…

Have you ever been to an establishment that turned you around on your second visit?