You know, I would say that the island is calling if we were having a truly, crappy {normal?} winter.

But the truth is, I can’t complain! There were some bitterly cold days that were below zero, even to the point where your nose hairs freeze. But last year, we had many more of those days. I think my friend said that there her daughter had like seven days of school canceled last year. She was about to go crazy.

Furthermore, my husband only had to snow blow the drive once this year. ONCE. I know we are lucky compared to the East Coast, whose residents got absolutely dumped on this year. I do not envy them. I feel… lucky, rather.

Then last week, we had weather in the 60s.

It was a dream. I’m not complaining about the 40s and 50s we had this week either. We might just have a real spring this year. That combined with a real fall this past year and we will truly be a state of four seasons! I’ve heard people say that they love living in Minnesota because we get all four seasons.

We normally have summer and winter with just a fringe of spring and fall that lasts about a week to transition to and from the extreme seasons. The annoying part is that when those week-long seasons happen is anyone’s guess. They can strike anytime during the period when we should be having a true spring or fall.

But this year is a dream! Spring, I hope you stick around. I don’t want to see snow in May like we did a few years ago! Please, please, spring. We love you and want you to stay!

I digress. This post is supposed to be about the dogs… 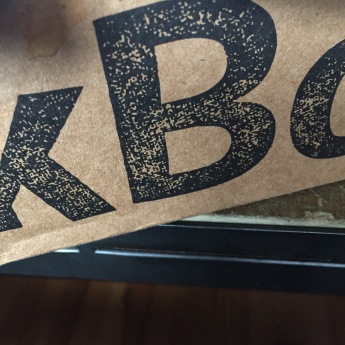 March’s BarkBox is based on the fact that many of us might still be trying to survive winter and wishing for an Island Paradise.

The dogs get oh-so-excited when the BarkBox arrives. But this month, Sophie was shaking with excitement:

Here is what arrived:

Usually Sham goes straight for the toys in the BarkBox. He showed some interest in the Tiki toy when I squeaked it. But when I threw it, he chased it, sniffed it and came back to see what else I had to offer. 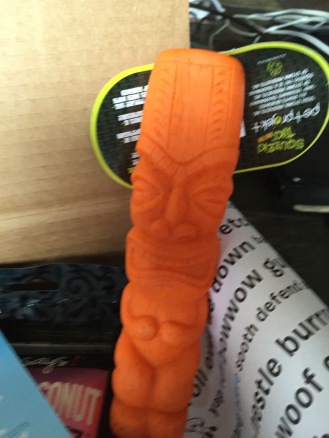 Perhaps it is because it is a plastic toy rather than a plush one. The toy that I shall name ParrotHead {Yes, he is a Jimmy Buffet fan} did not become popular right away either. Both the pooches were more interested in the treats this month.

The Etta Says Coconut Treats are the perfect size for our 15- to 20-pound dogs. They are soft and chewy, too, making them one of their favorites so far! As Sophie ages, I find that hard treats are much less appealing to her.

The Golden Nuggets are the strangest treats I’ve ever seen. Many BarkBox subscribers must have been confused by these because I received an email before I got home and saw the package at our door.

The treats are very hard, but there were instructions on the back of the package: 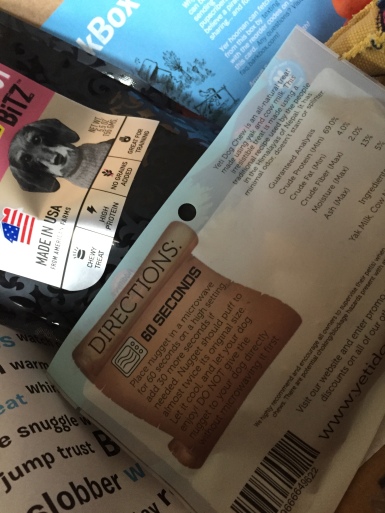 When the description reads that the treats should “puff” up, I thought that would mean they would get softer. After microwaving, I let one cool down and cut it in half. The dogs were very confused that I was feeding them Styrofoam {or so it seemed} and sniffed their pieces for a good while before deciding to finally chew them.

As I was cleaning up the wrappers and contents of the BarkBox, I found something else:

Bonus! The dogs always love these and Barkworthy chews. I just have to save up a couple at a time so that they each have one. No dog fighting allowed!

Is an island calling your name right now?