Yes, so I know our dogs are spoiled.

In fact, they are SPOILED ROTTEN!

That’s why, when I saw a deal for the Spoiled Rotten Box by PetFlow, I knew I should check it out. I started following PetFlow on Facebook a few years ago. I don’t even know why or how I found it. It was quite possibly a Facebook ad on the side that caught my eye.

Why did I start following them? They post absolutely adorable pictures of pets and other animals! Sometimes they even provide captions. No matter what, they’ve always brightened my day. It took about a year before I realized that PetFlow is actually a pet food company!

My dogs are so spoiled rotten that they got TWO new dog boxes this month. {Well, only because two deals were offered!} Let’s take a look at them in the order that they were received.

What I like about PetFlow’s Spoiled Rotten, is that unlike most other subscription boxes, they list the retail prices of the items in the box: 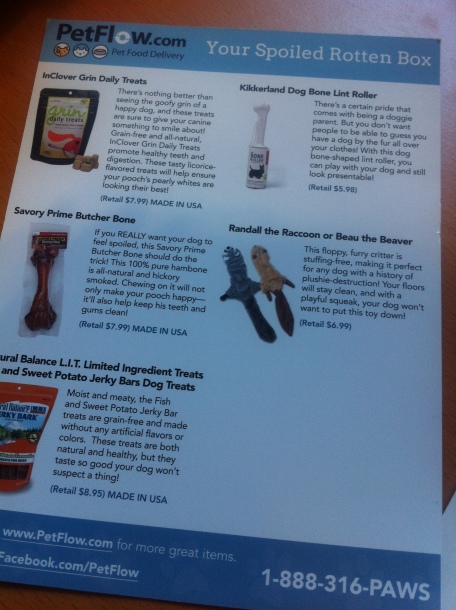 This means that, according to these prices, the items in the box we received totaled $37.90. That is slightly less than the $38.99 regular subscription box rate.  Unless, that is what the box is meant to be “worth” and that is why it looks discounted to $24.99 when you put it in your shopping cart. But were those items worth that much to us? Let’s take a look… 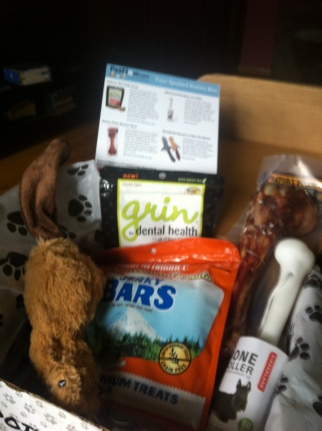 The first thing Shamrock did when I opened the box was steal that Beau the Beaver dog toy and off he went, tags and all. I struggled to get it back from him to remove the tags and to put it back in the box above for the quick box photo above.

Despite the fact that the squeaker in it was destroyed within about an hour, he adores that stuffing-free toy. After I’ve forgotten about it, he’ll just walk into the room with it in his mouth. He’s done this almost every day since he got it. That was worth it.

It is a rare occasion when our dogs don’t like one of the treats in any of their doggie boxes. The Grin Daily Treats and Jerky Bars in this box didn’t disappoint. I just know that on my own, I wouldn’t go out and pay $8 and $9, respectively, on either of these.

The Savory Prime Butcher Bone grossed me out completely! I know dogs like real bones, but it’s packaged with all the juices and stuff. My dogs are NOT getting that. It’s very big, so it might just be a gift for someone we know with bigger dogs. {As long as it doesn’t gross them out as much as it did me.}

And lastly, we have the Dog Bone Lint Roller. It’s always nice to have a few of these. However we pick up lint rollers and their refills all of the time whenever we are at Ikea and the dollar store. I don’t think $6 to have the handle dog bone-shaped is worth it.

For those of you whose furry children are the feline kind, SPOILED ROTTEN makes boxes for cats!

I am not even sure how I found out about this one! But when I found the site, I saw that they were offering their first month for FREE! {At the time of this writing, that offer is still available here.} I only had to pay $5 for shipping. I chose my dog size {11-50 lbs} as well as age. I am guessing I chose the 3 to 10 years option because Shamrock won’t be a puppy forever. 😦

After I ordered it, I forgot about it. Until the box arrived at our doorstep…

As usual, once I opened the box, the “kids” tore into it to explore. I try to let them get a good sniff, but not steal anything out like Shamrock did on the last box. I’d hate for the packaging to harm them. 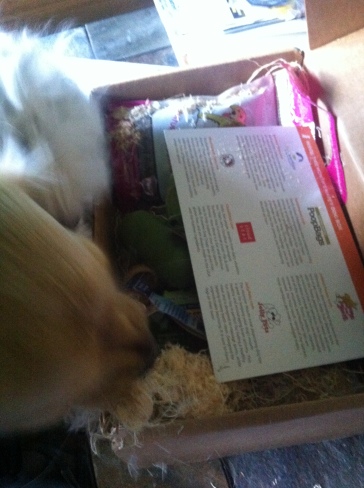 Here are the contents they discovered…

I tried to keep Shamrock distracted while I gave Sophie the Barkworthies Chew. This is one of her favorite things she goes for immediately when they come in their BarkBox. If Sham’s going to deny her the toys, I can’t take this tradition away from her! The Homemade Biscuits disappeared that day as we taught Sham to do a new trick. We’re trying to get photos of that one!

I love the PoopBag dispenser, too. They clip right on to your leash, so you don’t have to remember to bring bags with you. They are refillable, too. We already have one clipped to one of the leashes. But this green one will match our Green Bay Packer leash!

The only item that didn’t really work was the Jolly Pets Monster Mouth Treat Dispensing Toy. Sophie loves these type of things, but this one was HUGE. It looked like it would be too easy to get a toy out of the mouth. Just check it out here. RAHR! 😉

Then I read the tag and discovered that these were for Medium to Large dogs. Well, technically, I had chosen our dog size as medium because both Sophie and Shamrock are in the 11 – 50 pound “medium” category. But they are also both below 20 pounds. I think one of these would have been more appropriate for our dogs.

It took me a while to find out how much this dog box was per month if I decided not to cancel.

Regular Price: They start at $29.99 and I’m not sure if that includes the $5 shipping or not.
My Deal: First month FREE, pay only $5 shipping
Current Deal: At the time of this writing the deal I got for a FREE month with only $5 shipping was still available!

Actually, $29.99 is a pretty good deal for all six items that came in the box. That’s less than $5 per item! It’s just not in the budget right now to add another doggie box at that price point. I felt pretty guilty canceling when I really paid $5 for such a great box, especially when I got this cute email reply!

I’ve belonged to a wine club before where when I called to cancel they quizzed me and made me feel horrible about it, so much that I knew that I’d never go back. I love that Happy Dog Box not only makes me smile with their response, but doesn’t alienate me as a customer. It is quite probable that I will go back one day. They made a good point when I was looking online for their pricing:

The average dog owner spends around $40 a month on dog treats, toys and other products; it all adds up! Our boxes start at just $29.99 a month, and they come automatically, so you’re always ready for training or treating. It makes (dollars and) sense!

I honestly didn’t think we ever spent that much on anything outside of food and the vet. Sophie had received so many toys over the years as gifts. I don’t think we purchased that many ourselves. Shamrock has ripped many of them to shreds since he has joined our household! With a puppy, new toys are inevitable. He also has gone through some teething-type chews that are supposed to keep puppies from chewing on other things. While they seemed to keep him occupied for the most part, I found that he broke the plastic down so much that he was eating it! Those were about $10 a piece. Ouch. Maybe we were spending more than I thought.

Regular Price: $29/month with free shipping, $24/mo with a 3-month subscription, $19/mo with a 6-month subscription
My Deal: Half-off first six months, then I renewed at the $19 rate (prepaid). BarkBox made the right move by giving me half-off the first six months so that we’d fall in love with it and renew for another six!
Current Deal {at the time of this writing}: Click here and use COUPON CODE BarkPost for $10 off. (New customers only. Expiration unknown.) Or, click my personal referral link at any time and receive $5 off.

There are other reasons why we love BarkBox. But that’s for the post when the box arrives this month!

Do you have any new favorite boxes or discounts to share?