I promise that this will be my last post on Hawaii!

Although we ate in quite a bit, I did want to make a note of the restaurants we did try, whether for pupus {appetizers}, a meal or just a cocktail. When we go back one day, we’ll have an account of where we’d like to return {and what to order!} and where we can skip. I apologize in advance for the lack of photos!

Duke’s (in the Marriot) – Lihue

We technically didn’t eat here. We just got drinks until our friends arrived. We had our first Mai Tais here and some not-so-exciting beer. My favorite, though? A Pineapple Mojito!

Our plan that first night was to all go to Costco to pick up some groceries for our week-long stay in the condo. However, everyone was just tired from the long flight, so we stopped at this pizza joint to fuel ourselves with the intention of hitting Costco the following morning.

Rob had the Pizzetta Signature Truffle Spaghetti Meatballs – with truffle oil, cheese foundue, meatballs. Rob will order nearly anything {well, that he can eat} with the word truffle in it. He’s generally right that truffle-flavored dishes offer a one-of-a-kind umami experience and this one did not disappoint! This dish is highly recommended!

If possible, I like to order local dishes or dishes inspired by local spices when I am traveling. So when I saw Kalua Pig & Cheese on the pizza menu, I was intrigued. Mike told us that Kalua pig was definitely something we’d have to try while on the island. I decided to order the calzone since everyone else had decided on a pizza and Rob was ordering pasta.

Here is how Wikipedia describes kalua:

Kālua is a traditional Hawaiian cooking method that utilizes an imu, a type of underground oven. The word kālua, which literally means “to cook in an underground oven”, may also be used to describe the food cooked in this manner.

The meat is left in the ground to cook for six or seven hours! You can read more about how this works here.

My verdict: Juicy shredded pork complementing just the right amount of cheese. A Kalua Pig Calzone – the perfect Hawaiian-American comfort food to ease me into the trip.

Side note: Rob enjoyed some kalua pork and eggs with rice for breakfast later in the trip down at the poolside bar in our condo. It was a satisfying breakfast {much more so than my disappointing macadamia nut pancakes}. So I knew we’d be eating kalua pork again on the trip!

Joe’s on the Green (at Kiahuna Golf Club) – Koloa

We had lunch at Joe’s on the Green after golfing the Kukuiolono Golf Course with the guys. This is the little $9 nine-hole golf course I talked about here. $9 is not per round – it’s per day! If you’ve ever been to Hawaii, you know this is a steal, especially for the views! Since I didn’t want to pay to have my clubs checked for just one day in Hawaii, Lisa suggested I just have Rob put three or four clubs in his bag. When we arrived, I could rent a bag at the golf course – for just one dollar. It worked like a charm.

But I digress, back to lunch at the Kiahuna Golf Club. In the parking lot, before we went in, I noticed this license plate: 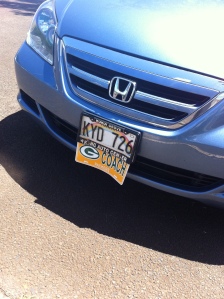 A Packer Fan in Hawaii!

The fan caught me snapping that photo, so we stopped to talk with him. This older gentleman from Texas was quite interesting to listen to because he knew the Bart Starr family. Still, a fun coincidence was that he has a lake home on the same lake in Wisconsin that Mike and Lisa have their cabin!

Digressing again… But you’ll never believe what I had. A Tuna Melt! 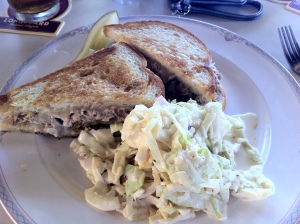 I had the choice of French fries, island coleslaw, potato-macaroni salad or steamed white rice {available as a side in Hawaii almost anywhere}. I chose the island coleslaw. It was good, but not memorable. I ate my entire tuna sandwich – it hit the spot.

Rob ordered a sandwich which he has declared as just “an average Rueben.”

Grove Café aka “The Plantation” (at the Waimea Plantation Cottages) – Waimea

We went to the Grove Café for lunch after our trip to the Waimea Canyon. I don’t know why, but the Menehune Nachos were calling my name!

It’s also where we enjoyed these tasty beverages:

We did not eat here, but it’s supposed to be the best place for sunsets on the south side of the Island. Lisa loved the snorkeling at this beach. Rob liked the cocktails. This is where he had his favorite Mai Tai – the Majestic Mai Tai with Coconut Rum, BH Potion, Bacardi 151, Dark Rum.

We didn’t really dine here either. We shared some pupu {appetizer} sliders and enjoyed our last Mai Tai in Hawaii here: 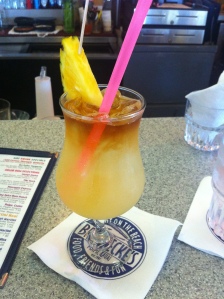 Last Mai Tai in Kuau’i – the napkin says it all…

I loved the area of sports team hats hanging on the wall at this bar, too. Can you find the Cheesehead? 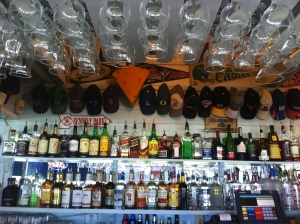 This is also the bar where I got to try the lychee cocktail!

We went out for pizza another night. And while the pizza that Rob and I ordered was so yummy that I ate half the pie {definitely not a weight-loss/habit-changing victory!}, this needn’t be a place to visit again. I tend to enjoy going places were there are some local specialties on the menu. However, this menu was distinctly that of a pizzeria.

Tidepools (at the Grand Hyatt) – Poipu

This was the highlight restaurant of the trip! We made reservations and walked just up the beach from our condo. It was that close: 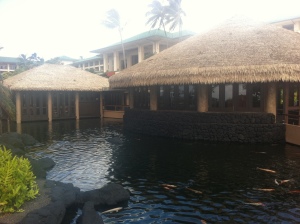 These open-air thatched huts over koi-filled lagoons create an inviting ambiance that is even more lovely at night. It must be experienced! The photo above does not do this place justice.

Tidepools will be a splurge if you plan on going there. It was a bit more expensive than even our nicest restaurants in the Twin Cities. {But almost everything is more expensive in Hawaii, right?} Still, it was worth every penny for the high quality food and romantic setting. I loved feeling the breeze on my shoulders, watching the fish splash in the ponds, the tiki torch lighting. The mood was set perfectly.

This is one place where I most definitely should have taken pictures. However, to stop this temptation, I left my iPhone back at the condo. I wanted to just enjoy this evening with our group and not be a distraction.

I ordered the Mahi Mahi –  macadamia nut crusted with coconut jasmine rice, baby bok choy, tropical rum sauce & papaya-avocado relish. Doesn’t this dish just scream, “HAWAII!!!!” In any case, it was absolutely decadent. The portion size was perfect since I wasn’t having any appetizers or desserts. I would order this all over again.

The other dish I was considering was the Hawaiian Catch – soy ginger glazed and stuffed with wasabi shrimp and lobster, yukon mashed potatoes, asparagus and lemon-ginger beurre blanc. I don’t remember what fish it was that was the catch of the day. {It was something I hadn’t heard of before.} Lisa ordered this, so I had the opportunity to try it. It was very good, but I was happy with my choice because I liked mine better. I think she said that she liked hers better, so we made the right choices!

Rob ordered the New York Strip Steak – “prime” Brandt Farms Organic with manchego potato chips, black garlic steak sauce and roasted garlic hollandaise. Rob was in heaven with those homemade manchego potato chips! And while he said that the steak had great flavor, it just wasn’t his cut of meat. He couldn’t eat it all, so he gave the rest to the others at the table whose eyes rolled back in their heads with delight. I had tried it myself and had to agree with Rob – it’s all about the cut. While marbled steaks are highly revered in the meat world, we prefer ours a little leaner. {And I’m glad he does being that most of his diet consists of red meat and pork , or as Rob would say, “slow-moving land mammals.”}

The other guys ordered the Ahi – grilled with roasted garlic hollandaise, foie gras fried forbidden black rice, pea shoots, and truffle miso-eggplant sauce. I have to admit that this was another dish I had been considering. Why wouldn’t I want to enjoy fresh ahi tuna while in Hawaii? The guys loved it. I did have the opportunity to try ahi later in the week: some fresh stuff that Mike seared for us as well as some ahi poke from the deli. Both heavenly!

After dinner, we walked back to our condos in the dark. It was a romantic walk along the paths with the moon high in the sky and the only light to guide us – the tiki torches. What a lovely evening that I’ll never forget.

We took in our last day of Hawaii to its fullest, as our departure flight wasn’t until 10pm. We soaked up as much more sun and fun as we could before heading towards the airport. We stopped for dinner on the water at JJ’s Broiler. I was excited because I could have one last Koko Brown Ale – it was on the menu! I ordered an Ono Sandwich because it was local fish I had not yet tried. It was a little on the dry side. But I did have my last helping of rice instead of fries, too.

Boy that does look like a lot of restaurants now that I look back. However, we didn’t eat at all of them. Furthermore, it’s not really that much when we could have eaten out for all three meals a day times seven days. We did our fair share of dining in at the condo.

Still, one day when we go back, we think we’d like to try the following;

Red Salt  – another splurge restaurant with a higher end menu

Da Imu – adorning the name of the underground oven in which kalua pork is cooked, our guide on our Na Pali Coast Boat Tour recommended this place. He said it’s more of a local dive with exceptional food. Looking at reviews online, it looks like Teriyaki Fried Chicken is a favorite!

If you have been to Kuau’i, please list your favorite restaurants and entreés so that those making a future visit will have some great recommended options!