Looks like we’ll be getting another Arctic Blast soon… And I was just starting to enjoy this 30+ degree weather. Really. It felt balmy. Time to put on the PARKA again!

That is, we used our last Living Social voucher to PARKA. This time, we went for lunch. To read about our first impression of PARKA on Rob’s birthday, click here.

At PARKA, you order at the register and wait for your food to be delivered to your table. 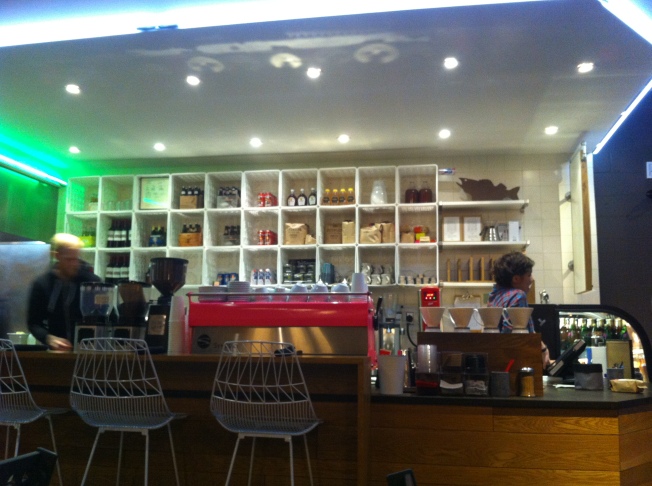 I find it a bit awkward to tip in the jar on the counter. I feel like I need to make sure someone sees me do it! The food has such creativity and artistry as you’d find on Top Chef and is delivered to your table by course. It just feels strange to get up and leave after you finish your meal, not wait for the bill or leave a tip on the table.

I also noticed something new this time around:

That fish is thirsty for some PBR!

We ordered the Seasonal Indeed local beer on tap:

There was no throwback North Stars Hockey playing on the old television like last time, but I did take a look at the coffee menu, which also illustrated a love, or at least an interest, in hockey:

What’s great is now they have short descriptions of the food on their menu both in the restaurant and online! But I still liked that they described each dish as it came out. It makes it more personable.

For our appetizer, we couldn’t pass up the Devils on Horseback we ordered last time. They were as good as we remembered!

We chose different main dishes this time around. 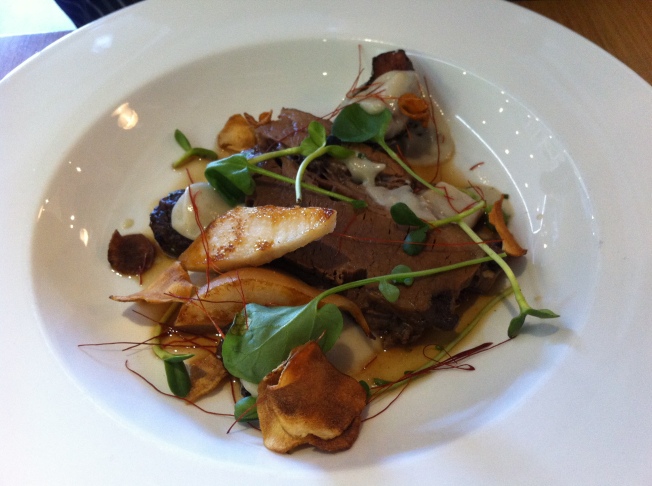 We were explained that the brisket is braised for 12 to 16 hours and that the sunchokes are actually prepared four ways in this dish – roasted, sunchoke chips, a sunchoke puree and another that I don’t recall. We liked them and decided that we may have to try to find sunchokes to roast on our own! Rob said that the meat was so tender that it fell apart in his mouth; but it didn’t have much flavor. It actually seemed like a pretty healthy dish. Which you don’t always think of when you think of a brisket covered in gravy or a sweet, sugary barbecue sauce.

So much food! I only had a couple fries because they aren’t my favorite and I gave half of the sandwich to Rob. But it was so good! There was very little bacon flavor {which you know I liked}, so it didn’t overpower the dish. The cheeses were so gooey and melty and worked beautifully with the onions and apples. I recall being told that there was fontina and cheddar, but missed the third cheese. Perhaps Swiss? The apple slices didn’t taste pickled, but a little sweet and cinnamon-dusted. But I think what really made this sandwich was the maple syrup! It sounded strange to me at first, but it was just this light sweetness, not overpowering nor saturating. And it worked perfectly on the outside of the crusty bread.

Rob said this is what he’d get the next time we come back to PARKA. He also said that it almost beats the The Lowbrow out for best grilled cheese!

We had originally planned to get the chocolate cake we adored so much last time for dessert. But now that there were descriptions, we just had to order the apple pie!

This was a deconstructed able pie of sorts made with a shortbread-style cookie topped with the apple filling and pecan crumble with a swipe of caramel sauce. We were intrigued by the sharp cheddar ice cream on the side! It didn’t taste sharp, but it was very good. Our only complaint with this dessert? More caramel, please! But everything should have more caramel, shouldn’t it?

We loved this dessert, but think we really loved the chocolate cake we has last time even more.

However, this past week, Rob found this article which states that Chef Erick Harcey “will no longer be acting Executive Chef for Stock & Badge, which includes Parka…” Although “He plans to stay on as a partner,” I’m not sure what this means for the creative menu at Parka. Will it remain the same?