This is the cute and cuddly Australian animal post!

But first, a topic that is quite important and serious:

Okay, so not that serious, but now you know that a koala is not a bear!

They may look cute and cuddly like teddy bears; but koalas are marsupials. You know, the mammals that carry their undeveloped young {called joeys!} in their pouches. {Well, the females do.} So yes, in that sense, koalas are like kangaroos.

Now… On to the koalas at the Ballarat Wildlife Park.

Koalas tend to sleep 18 to 22 hours per day! Perhaps that is one reason why they look so sleepy and adorable. They need their down time. Therefore, they are not loose about the park like ‘roos and emus. Instead, you can spot the koalas in in trees inside the enclosures.

But, there are a couple ways you can get closer look!

The Wildlife Park has guided park tours and shows throughout the day. A guide will bring out one of the koalas and tell you everything you didn’t know about them.

You may even get to pet one!

The other way to get a closer look is to book an Animal Experience!

When we found out it was only around $20 for an “experience” with a koala, we were all in. 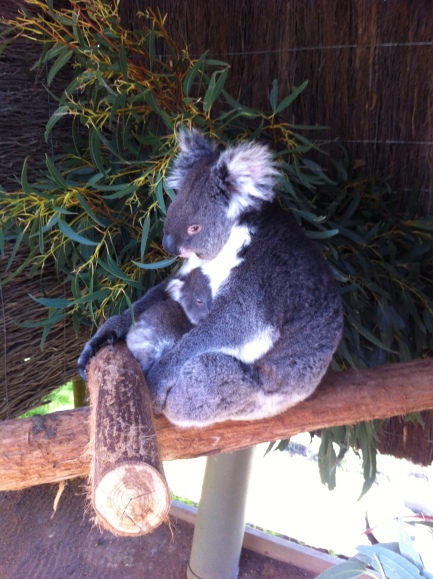 It may feel like it’s a bit expensive or an extra cost to get a closer look when you’ve already paid your entry fee into the park. But it truly is due to the welfare of the animals. They need to make sure that there is a koala who is available, awake and receptive. 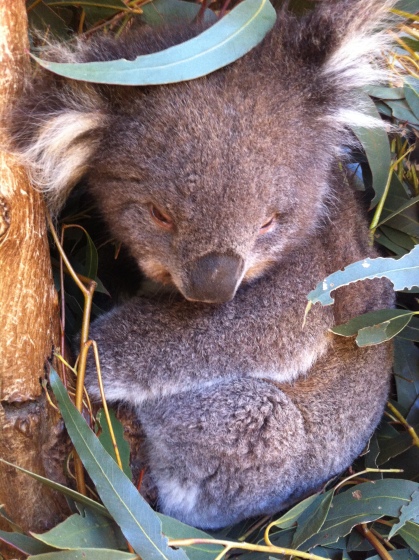 During your koala experience, you can take as many photos as you want. Our koala is named Matilda. {That immediately had me thinking of the song Waltzing Matilda.} She was so sweet! In Victoria, you can’t hold or carry around the koala. That can only be done by trained professionals. That’s okay, because we had heard that they pee on you! Instead the guide will put her on a perch and hand her some gum branches to nibble on. Then you squeeze in next to her and stroke her fur. I will never forget the smell of the eucalyptus leaves as she munched on them! 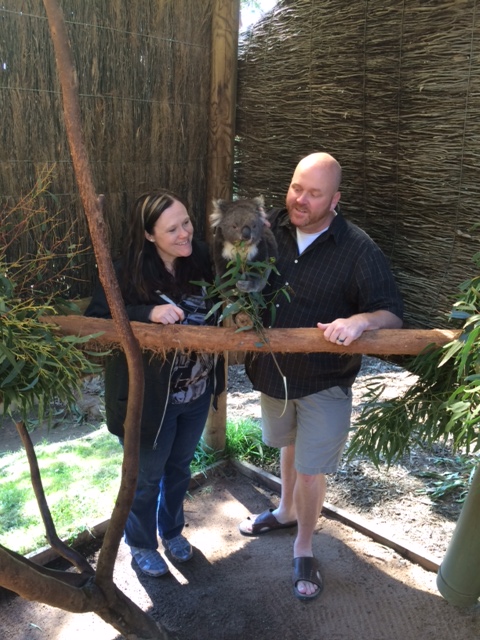 The photographer told us not to be shy. He said that we should get as close as we could because she wouldn’t mind the cuddle!

The cost of the animal experience is a steal, really, because up to four people in your party are welcome to go inside the enclosure to meet the animal. Trust me, the koalas just might bring about a permagrin, just like the kangaroos!

The photographer was kind enough to take a photo of us with Barb and Tony and Matilda with our camera.

And here’s a photo of our professional take-home photo:

Then, it was on to the wombat, which is not a bat at all. I asked my nephew this weekend if he wanted to see the picture of the wombat I held in Australia. When I showed him this photo he said, “Hey! That’s not a bat!”

Honestly, I wasn’t familiar with the wombat until going to Australia. A wombat is another marsupial! Obviously, we chose to do the Wombat Experience as well, that is why we got to hold Pickles the Wombat.

When I posted some photos for my friends and family on Facebook, some said she looked like a big rat. But she felt was oh-so cuddly!

Others told me that I was squeezing poor Pickles to death. But that is how we were told to hold her! Just listen in our amateur video:

Now wombats are not bats, but something we saw later in Cairns are… They are called flying foxes. Figure that one out! 😉

Other posts on our Australia trip: