especially if you have limited time to visit.

There are so many.

You want to try them all.

Then we have another challenge: Rob’s allergy to seafood and poultry, among other things. That helps narrow it down, right?

There are over 1500 restaurants. How can one determine the best and worst?

You most likely won’t have any bad food while you are in New Orleans.

Remember what someone told me the last time I was in New Orleans?

When asked what were the best restaurants in New Orleans, a local stated, “Anywhere is good because a restaurant wouldn’t survive here if it wasn’t.”

This post is really about our most and least favorites of this trip.

Least favorites are ones where we know we don’t really need to return.

One of my favorite restaurants the last time I was in New Orleans was Jacques-Imo’s on Oak Street. I remembered that they didn’t take reservations and that when my girlfriends and I arrived, there was a two hour wait. We sat it out. And it was wonderful.

On this trip, Rob wanted to make sure I got back to Jacques-Imo’s. He said he didn’t want to rob me of the experience regardless of the menu.

I was sipping a local Abita Purple Haze at Ryan’s Irish Pub the afternoon that we had planned to go to Jacques-Imo’s for dinner.

I wanted to arrive early for dinner because I did not want Rob to have to wait, especially if he was going there for me. As we sat at the Irish Pub, I decided to pull up Jacques-Imo’s menu on my phone. As I perused it, I realized that…

There was only one thing on the menu that Rob could have! Because…

All the things I loved about this place – shrimp! crawfish! oysters! fish! – Rob could not eat. The only thing on the menu that I thought he *might* order was the Deep Fried Roast Beef Po-Boy with gravy (but that “g” word turns him off). The po-boy actually sounded sort of interesting to me, too.

But I felt bad. I didn’t want to make him ride the St. Charles Streetcar practically to the end of the line to have to wait to watch me eat. Plus, at that moment I wasn’t feeling the menu. {Perhaps I wasn’t hungry yet?} I wasn’t about to eat the Shrimp and Alligator Sausage Cheesecake appetizer all by myself. {It’s a quiche of sorts, in case you are wondering.} It was much more fun when I shared it with friends.

So we starting asking the locals at the Irish Pub for restaurant recommendations. They started throwing out names and I started looking at the online menus:

I thought Cochon would have been the best place for Rob. I mean, the focus is PIG! But he shook his head at the menu. 😦 My cousin had cited August‘s 12-course meal as the best in her life.

To rectify this situation, I went to my trusty TripAdvisor.

GW Fins was #2 on the TripAdvisor list. The bartender’s boyfriend worked there and said that we’d need a reservation. But again, the menu was highly focused on seafood.

Then we finally found one… #15 on the list of more than 1500 restaurants in New Orleans was R’evolution.

“I didn’t even think of that!” said one of the locals at the bar. I work at the Royal Senesta Hotel. “I don’t know why I didn’t think of it! The restaurant is inside. They have great burger there.”

I was excited to make Rob happy and get some seafood. It had just wonderful reviews. It wasn’t a far walk in The Quarter either.

Per our usual, we arrived early and took a seat at the bar and ordered some drinks while waiting for the dinner menu to become available. Rob picked out a beer, while I wanted to try another new-to-me cocktail.

I settled on the Dutch Sling. 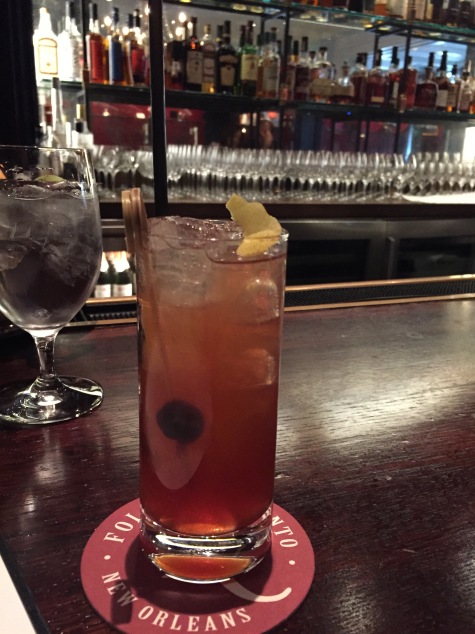 The drink was fantastic and it had the best maraschino cherry I have ever had. That’s when I learned that they were really Luxardo cherries imported from Italy.

I also had a glass of prosecco with my meal. When I was deciding on that, I noticed a $65 GLASS of Champagne on the menu. A woman seated with her man a few stools down from us ordered a glass of it. Yes, I seriously witnessed a bartender open a bottle of Champagne to pour a $65 glass and then promptly put the bottle in a big silver bowl of ice that contained other open bottles that needed to remain chilled.

I’d like to point out at R’evolution that the bartenders are first-class. We had excellent service.

For dinner, I considered the burrata….  But would that be enough food? And shouldn’t I be eating seafood? 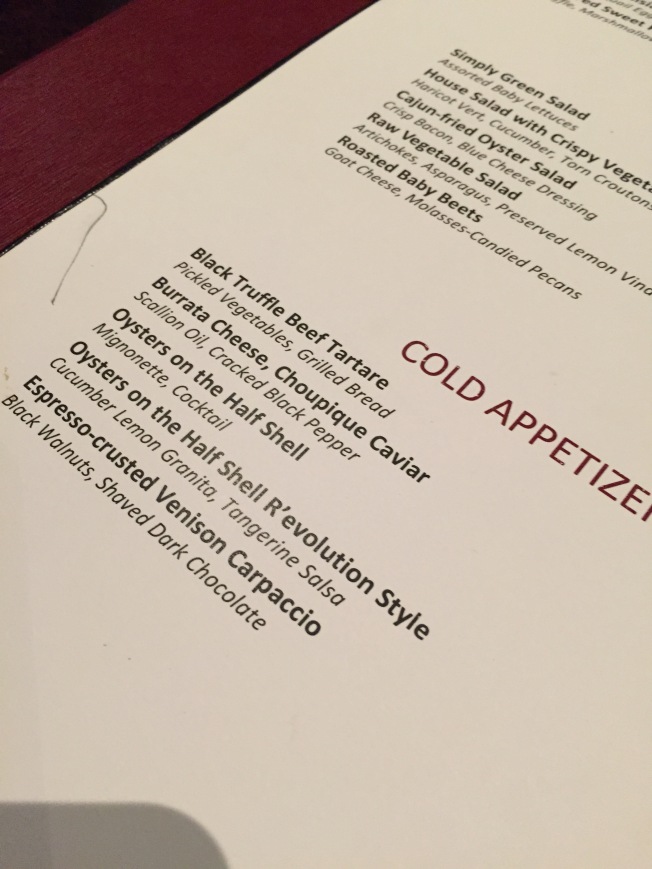 That couple a few seats down the bar ordered the oysters and they were HUGE. I’ve never seen oysters that big before. The bartenders said that they’ve had people send them back because they were too big. And these were the small ones!

We started with some bar fries while waiting. Rob knew he wanted to try the house made chips with his burger. 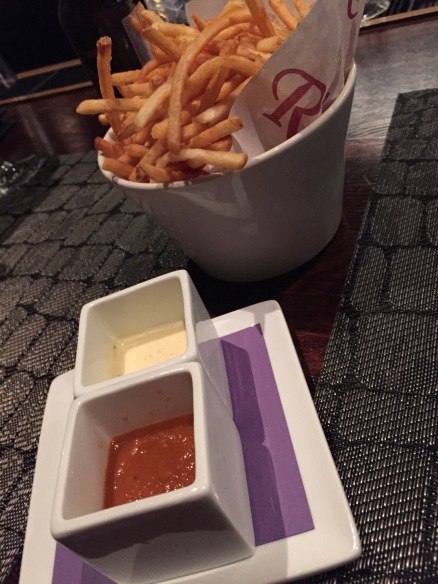 With our meals, we also ordered a side of Creole Cream Cheese Potatoes. Yup, we’re getting all starchy up in here.

The potatoes were not what I was expecting. I wanted some spice and did not find that here. Nor was I expecting mashed potatoes. They were creamy, however.

For my main entree, I was considering the Grilled Cobia Piperade. The last time I had cobia was over my wedding weekend in Pensacola five years ago. But what was piperade-style? I had to look it up. 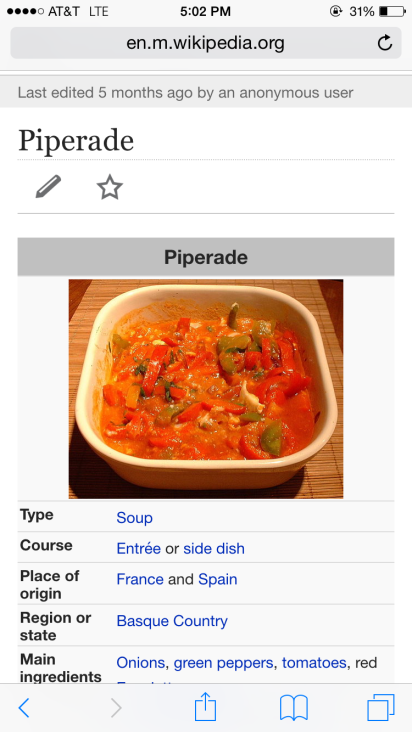 Sounded good to me!

It was beautifully plated. And look at me eating my broccoli! The sauce was good. But the fish was a little tough. After the fish I had at Commander’s Palace, I’m wondering if that is the way they like it down here? I was a little let down by this meal.

The burger looks good. But Rob was highly disappointed. He said there was no seasoning whatsoever. It was not only a #BurgerFail, but also a #TripAdvisorFail.

I know review sites are fickle and should be used only as a guide. But most of our Honeymoon on the Amalfi Coast in Italy was planned with Trip Advisor. It hadn’t failed us until now.

Funny, the most expensive restaurant where we dined the last time I went to New Orleans was also my least favorite.

Overall, we experienced excellent service at R’evolution. The food just didn’t blow us away. I would recommend popping in for a cocktail sometime, especially if you are in the market for a $65 glass of Champagne.

One thing I loved about R’evolution is that we met a couple our age {who am I kidding – 5 to 10 years younger than us} who live a few hours outside of New Orleans. When the gal saw that I was drinking Prosecco, she recommend we stop at Sylvain, one of their favorite places to go when they are in town. She specifically recommended the Champagne Cocktail. And I’m so glad she did…

Now, for the best of the trip…

Well, this post has been long enough. That’ll have to wait until tomorrow. 😉

How do you choose a restaurant for a special occasion or when you are traveling?