I know that I’ve already written about my experience at Marin. But I loved it so much the first time that the only way I knew I could get Rob to go was to buy a Groupon. This is one of the most successful ways that I know how to get him to go to restaurants I want to try. Not only does it make it a bit less expensive when you aren’t quite sure about the restaurant; but there is also {and most importantly!} the power of an expiration date.

We have to get there before it expires rather than just talk about it!

{We’ve been talking about La Belle Vie, Saffron, Café Lurçat, Barley John’s and Joan’s in the Park for years.}

So it was a Living Social Deal that brought us to my beloved Marin.

As you may have read in my most recent post, we just love spending time in downtown Minneapolis on a mellow Sunday evening! Unless there is an event going on, we don’t have to worry about long waits or big crowds.

I don’t know why this place is called Marin, but I did learn that it’s also lesser known county near Napa & Sonoma! 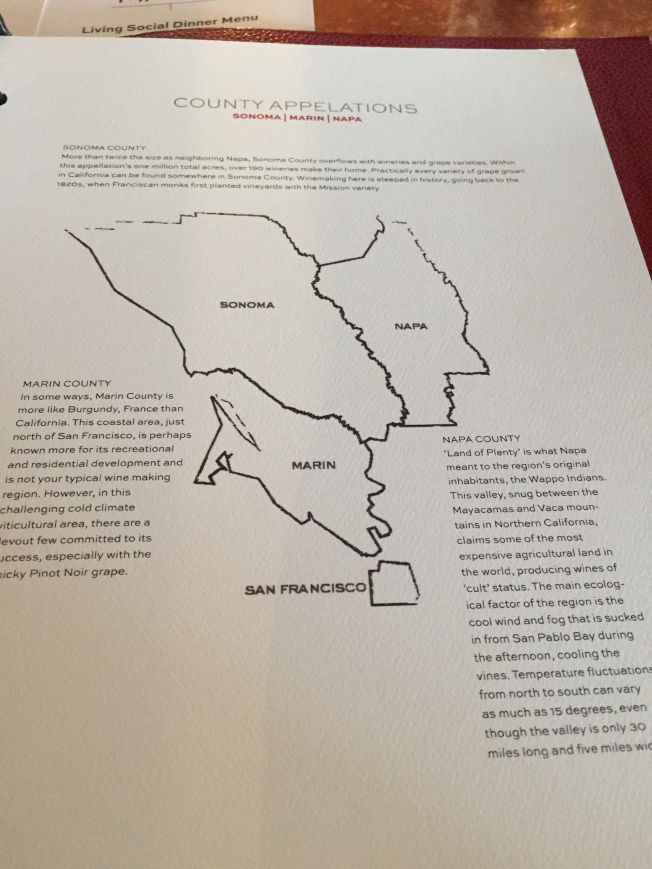 Per our usual, we asked if we could sit at the bar.

It wasn’t included with our deal voucher, but I started with a little apéro…

Unlike my previous cocktail at Marin, I loved this one! Those flavors together were complex. I loved the ginger in it! I recommended it to our other barmates.

Speaking of those barmates… We overheard the manager telling a story to them about his grandfather’s bourbon. He then stopped over and gave us a little taste because he didn’t want us to feel left out. 🙂 It was so smooth and may have converted Rob from Scotch to bourbon. Maybe…

What I loved about this Living Social experience with Marin is that although they have a specific Living Social menu, you can always order anything else off the regular menu for an upcharge. You are not limited to anything!

I immediately went in search of those scallops I adored… Which now that I think about it, I adored them at Mill Valley, too. They are sister restaurants!

Our choice of House Red or White was very decent! We each had a glass of Thomas Henry Pinot Noir. The white was a solid Pinot Grigio, too. I like the little break from the normal Cabernet or Chardonnay for house wines.

I found this salad to be very salty! However, at that moment, I also decided that pine nuts should now be put in every salad. And I thought maybe that the greens were arugula instead of baby kale because of the spiciness. But now I know it was that chili vinaigrette!

Rob chose the soup of the day, which was supposed to be Caribbean Pork.

How often does one see that on a menu?!

But Rob took one sniff and thought he smelled something fishy.

He asked me if I would try it. First I smelled it. Yes, it did have a sort of fishy aroma; but I reasoned it could be the spices that were used. Then I tasted it. Hmmm… It was a little fishy and the meat did seem more of a fish texture than one of pork. I wasn’t 100% sure, so I told Rob that he should ask our bartender. She didn’t think they would put anything fish-related into this bowl; but she went back to double check.

She came back and quickly whisked it away!

They had just changed it to Fish Stew that day! They were happy to exchange it with Rob’s other choice. He went with the same baby kale salad I did and agreed that it was very salty. He also concurred that all salads should have pine nuts on them. Forever and eva. Amen.

Apparently, scallops are not in season… So I went with the salmon.

That sauce is more of a broth, but it was wonderfully flavorful. It made that spinach taste like The Best Spinach in the World. I am quite pleased that scallops were not in season!

This three-course meal was definitely more doable than the huge multi-course meal we had at BANK. Dessert was a scoop of housemade ice cream or sorbet, of which they had four flavors of each!

I can’t even differentiate which is which in the photos. They brought them while I was in the restroom, so they were slightly melted upon my return. No mattter, they were delicious. Rob got the Insight Yuzu Pale Ale Sorbet (really!) and I got the Cardamom Ice Cream. Both were creamy and delicious; but the cardamom ice cream was the favorite of the two!

Rob loved everything about this restaurant, which I knew he would. I think that sometimes it’s the small online menu that turns him off when I suggest a restaurant. This Living Social Deal allowed him to experience the restaurant to its fullest.

But I still need to make it to the Library down stairs! The Library is to Marin like Parlour is to Borough and Marvel Bar is to Bachelor Farmer. (I believe.)

Happy Hour is available in the bar and in the Library (when open) Monday through Saturday from 3pm to 6pm and 10pm to 12am. There is no HH on Sunday, but there is the Sunday Supper. Rob hates the word supper, but I think he’d still go with it because it’s specific three course meal for just $20 per person. This includes only a few featured items, so it’s best to check ahead. They post the menu on line every week. You can add a bottle of their Marin Label House Wine for just $12!

What brings you into a restaurant you haven’t tried yet?