I’ve got one of those summer colds.

It started out as a scratchy throat and over days progressed into stuffy head and then into full-fledged coughing fits from my lungs. Not pretty.

I’m such a baby when I get sick because I don’t very often.

Last night, I didn’t want to cook the San Marzano Pasta I had planned. I wanted some soup – some really good soup. And since I had no energy to make it myself, I tried to think who had the best broth-based soup. Then it hit me.

I picked up some Nha Sang Pho. {I may have ordered some momo, too.}

I swear it’s Magic Pho that they’ve got there. Those spices make my mouth sing. I was warm and content.

And just before bed, I googled an Easy Hot Toddy, hoping we’d have the ingredients. As luck would have it, we did. 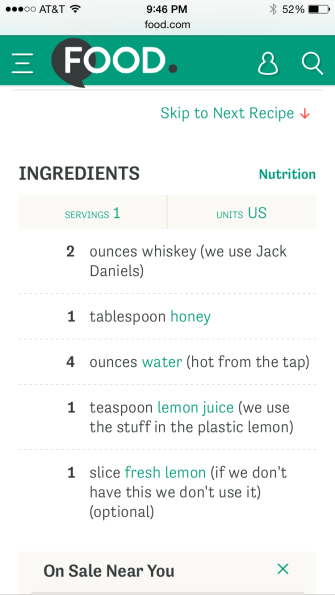 Well, sort of. The whiskey I used was not your average whiskey. It was Rob’s Mac 12 Scotch.

There wasn’t much left, but I still got his permission. I mean, I’d want him to ask me first if he wanted to use a bottle of Opolo Zin to make a Sangria. { In which, the answer would be, “Hell, no!” But in what universe would Rob make his own Sangria, I don’t know.}

The Hot Toddy was the perfect night cap and a nice change from the endless cups of tea I’d been drinking the past few days.

And you know what? Today, I feel a bit better. Groggy, but the coughing fits are not to be had. There’s only a sniffle or two.

So could Magic Pho and a Hot Toddy be the cure for the common cold?

But I’m more inclined to believe that it’s been since Thursday and maybe this cold has just run its course. {Well, almost.}

In any case, I’m grateful to be {almost} healthy again.

What are your tricks for getting through a summer cold?