Although I haven’t been posting much, I’ve still been reading a bit. Most recently I’ve posted on some good and a few not so great holiday books I read last year and a couple I’ve read this year, too. Now here’s a quick list of non-holiday/non-seasonal books I’ve read recently, too.

I’ve got the quite the variety of books in this list, including a comic book, a cookbook, an audiobook, a book of short stories and a self-improvement book! I’ve been running quite the gamut as of late!

I received this book sort of by accident. My 10-year-old nephew said he wanted a comic book for his birthday back in November and this book came highly rated. I promptly ordered it from Amazon. But after thumbing through it, it seemed like more of a book for girls; or at least one that I didn’t think my nephew would enjoy. I gave him this comic book making kit instead for his birthday and decided that Real Friends was better suited for my friend’s 10-year-old daughter. But not without me gently reading it first!

I think it is a perfect read for that 8 to 12-year-old range. Hale draws from her own childhood experience on what it feels like to navigate the friend world as a young girl. At some points, I thought some of the ways the mean girls treated the protagonist were harsh; but then, that is real life. We all work through handling people who are unkind and discovering who our true friends are. You can read this in one sitting if you’d like to read it before your child.

After Reading Creditcott’s Make Ahead Paleo, and being pleasantly surprised, I almost immediately gave this book a shot. I quickly realized this book is not for me. There were too many ingredients for recipes that are meant to be indulgent. If you are Paleo or gluten-free, however, this book might be for you.

What It Means When a Man Falls from the Sky
by Lesley Nneka Arimah (fiction, short stories) – on the fence

This book got such great reviews! I love short stories because they usually make me feel like I’m flying through the book. However, this one took me some time to get into and didn’t really grip me to the point I wanted to continue reading. I did, however trudge along. While there are some really important stories in here; they just weren’t doing it for me at the time. 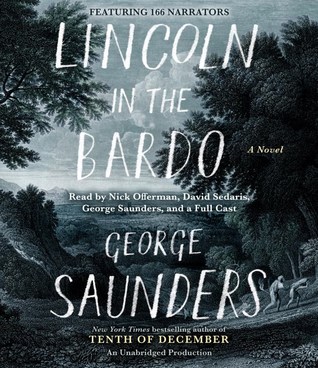 I had such high hopes for this book! It had such stellar reviews, especially the audiobook, boasting a cast of 166 narrators! I think that was the record. However, I went in knowing absolutely nothing about it. We started the audiobook on our way to Green Bay for Christmas and were quickly confused after the first chapter. The “cast of characters” were narrators of people’s other books. I had to stop the audio and read the back of the CD case:

Say what? We weren’t getting any of that! All of these narrators were citing one liners from other works and then stating the title and or author followed by “op. cit.” It was highly annoying to listen to that every five seconds. I think if I read the book, I’d be happy that to have that info if I’d want to research or read further; but I wouldn’t read those things aloud or in my mind!

Saunders obviously did his due diligence in collecting the facts on what the loss of his son was like to Lincoln; but then to add in a whole new realm of paranormal was just strange. To be quite honest; I let Rob listen to the rest of the CD since he was driving while I tuned it out and read old magazines instead! He said that after he understood and got used to all of the “op. cit.” nonsense, he rather enjoyed the story. (He does enjoy ghost and horror stories, though.) Still, he did not enjoy it enough to finish when we returned home before the end of the last CD.

Maybe reading the book rather than listening to it would have been a whole different experience for me; but I’m not sure. I’ve read other reviews that it reads kind of wonky and more like a play. But I particularly didn’t like that I was led to believe that the 166 narrators was more of a cast. If audiobooks are going to hire more than one narrator, it should be more of a performance!

It Takes One to Tango:
How I Rescued My Marriage with (Almost) No Help from My Spouse –
and How You Can, Too
by Winifred M. Reilly (non-fiction) – must read

I wasn’t in search of this; but I found it recommended in an email of top books about marriage that are actually helpful. I looked up those books to see if any were at my library. This one was just published this year; so I put my name on the wait list and forgot about it. When it became available, it wasn’t a book I was actually in the mood to read. But it ended up being one I read very quickly and probably one of the best books I’ve read all year!

Whether you are married (or even cohabiting, I’d say) and are worried your relationship is doomed OR if you are just having the same nitpicky arguments and jabs over and over again with no resolution, this book is for you!

I learned so much about myself and about human nature, in general. This is a book I am going to purchase and one I’ll be gifting.

Are there any books you’ve been surprised you’ve liked or hated recently?