I started watching the series Veronica Mars long after it was over, but just in time to see the movie. I can’t tell you how many seasons it took me to finally figure out what the PCH in PCHers stood for.

Don’t worry, I figured it out on my own eventually. I never even checked The Google!

If you aren’t aware, PCH refers to California’s beautiful Pacific Coast Highway. Which, as luck would have it, we got to cruise down further on our second day in California!

It truly is a beautiful drive. But first, we stopped for a little diner breakfast. There is more linguiça {Portuguese-style pork sausage} and avocado on this diner menu than I have ever seen elsewhere. Wait, I’ve never seen either on a diner menu! 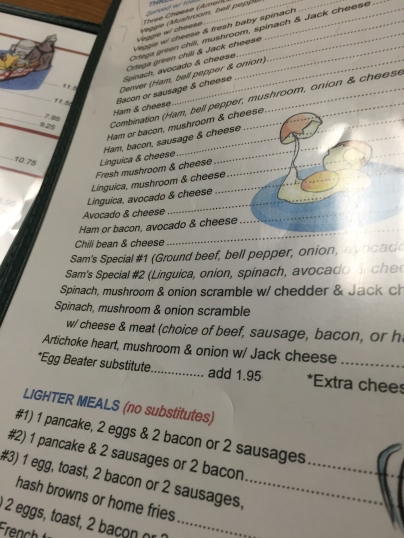 So I just had to order both… along with some sourdough toast. #WhenInSanFrancisco 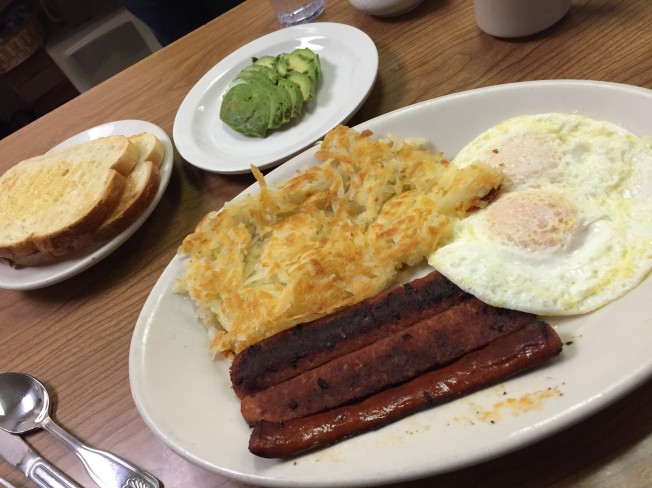 Bellies full, we ventured on. The drive is most beautiful, in fact, when you have a nice chauffeur-friend like Shondra stopping along the way, not only for photo ops… 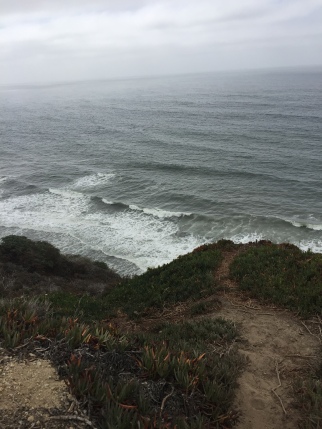 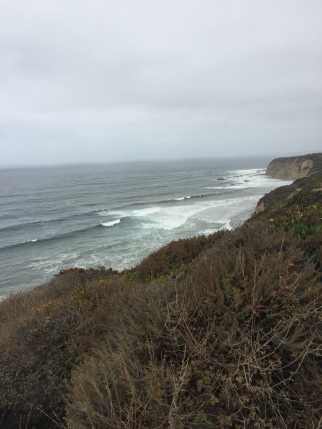 But also to check out a local market… 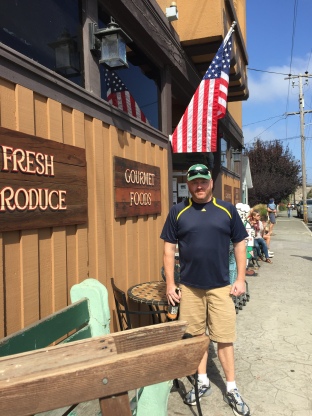 The market in Pescadero has lovely local produce and cheeses, freshly baked bread and all kinds of locally produced goods. Yes, that is a beer in Rob’s hand. It’s this one: 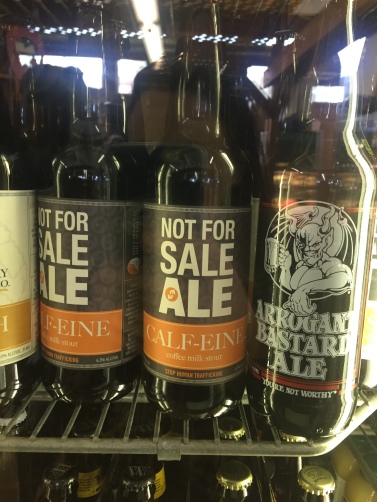 He didn’t drink it straightaway. Instead, it made for a perfect breakfast stout for us on Game Day in San Fran. Though we did stop for a drink at the local tavern in Pescadero, Duarte’s, which reminded me of the Old West. 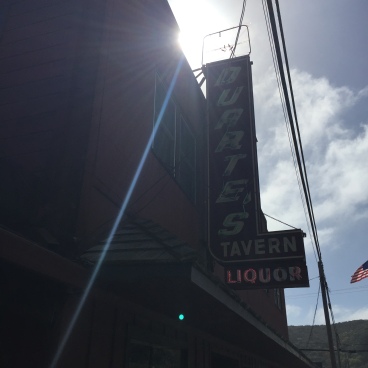 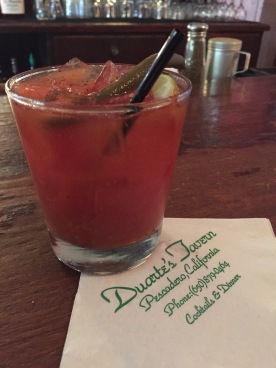 Jenny and Shondra promptly reminded me that we, in fact, were in the Old West. HA!

Shondra overheard some folks talking about a goat farm nearby. First, you need to know how much I heart this video:

Then, you need to know that Jenny said, “Well, these goats aren’t going to see themselves!” So away we went. Upon arrival, when we saw this… 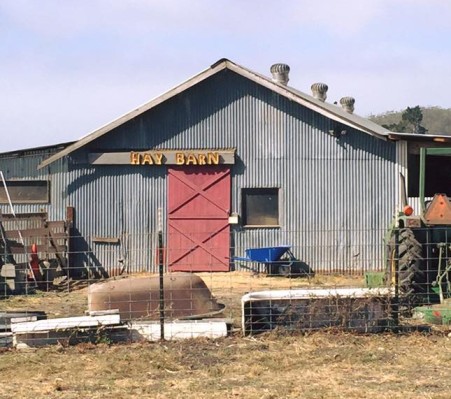 That’s when Jenny and I, almost on cue, yelled, “Haaaayyyyy!” 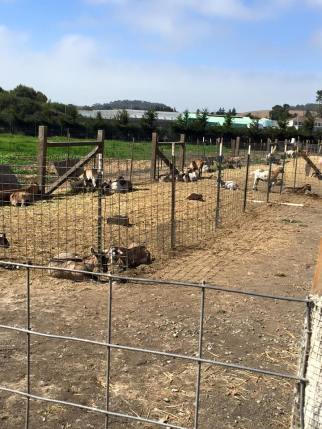 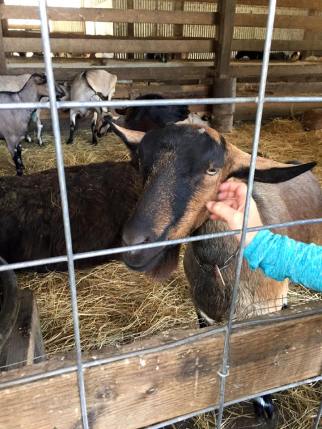 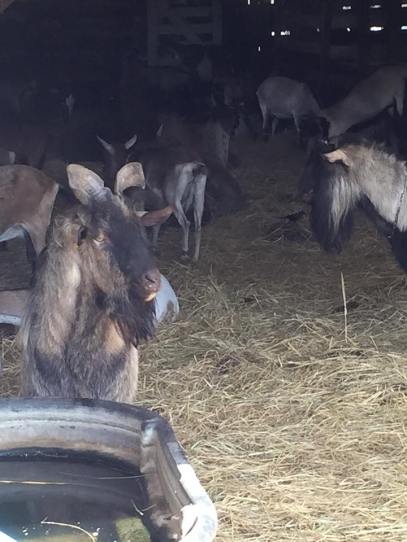 Harley Goat Farm has a nice little shop with lots of goat cheese and other goat milk products. 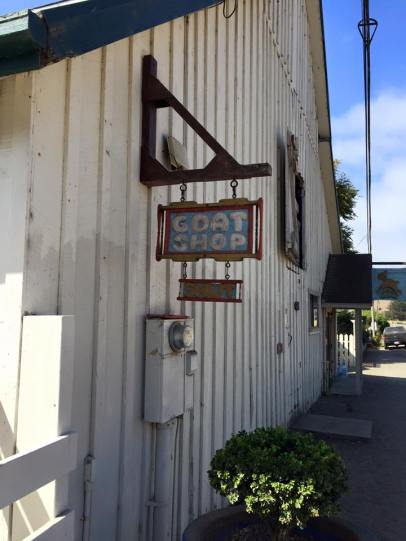 Funny, I’m the only one in the group who enjoys goat cheese! 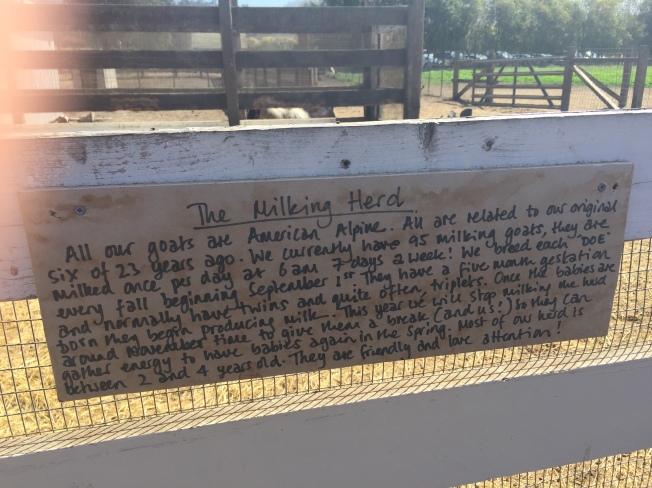 We were all in a silly mood. Jenny even got a selfie with a goat. 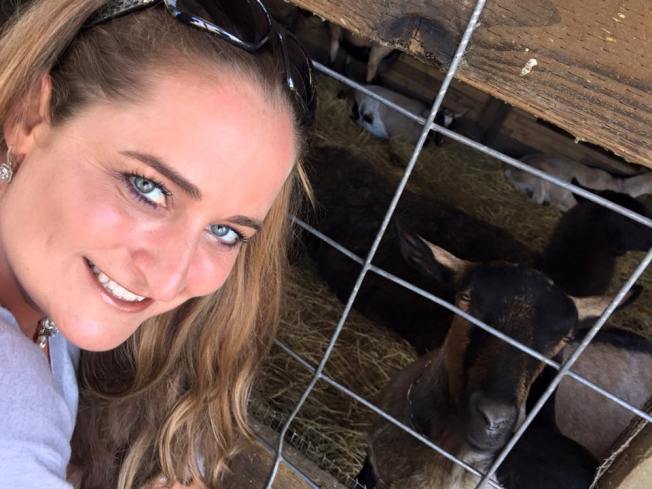 {Photo courtesy of Jenny, of course – its a Selfie!}

It was a nice stop, but we were back off  to the coast. 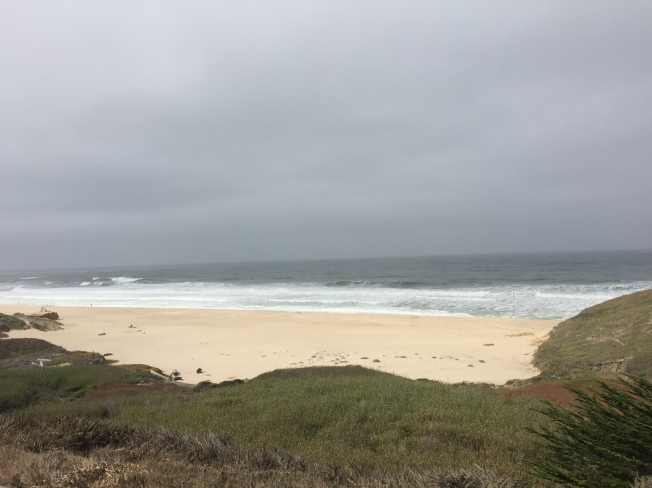 Shondra grew up in Santa Cruz. She says much has changed since she’s lived there. Our first stop was a cool little area with a few tasting rooms and restaurants. We had a different plan for lunch, so we just stopped in for a bevvy and a look around… 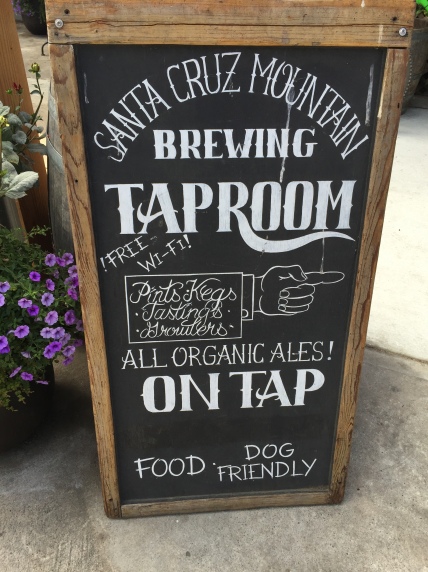 We didn’t love the beers at this Santa Cruz Mountain Brewery, but we loved the taproom and patio! 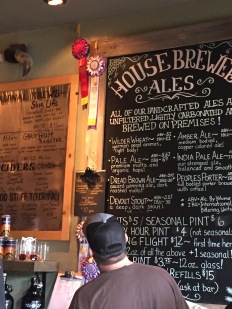 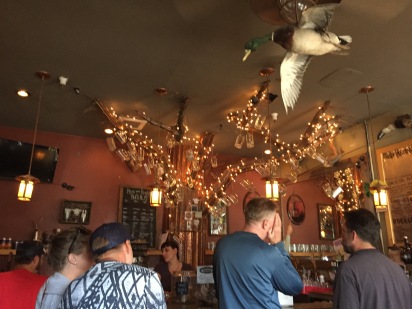 Then, a little sparkling wine tasting! I love me some bubbly! 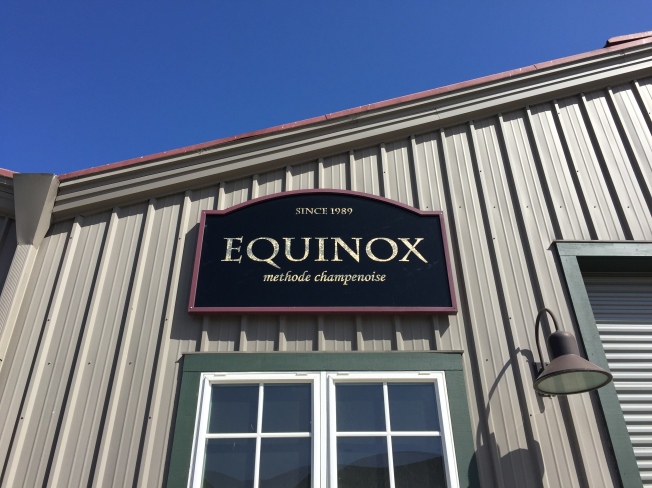 Shondra drove us around the coast of Santa Cruz and pointed out all sorts of places from her childhood. Then we stopped for lunch at her childhood friend’s family’s restaurant! 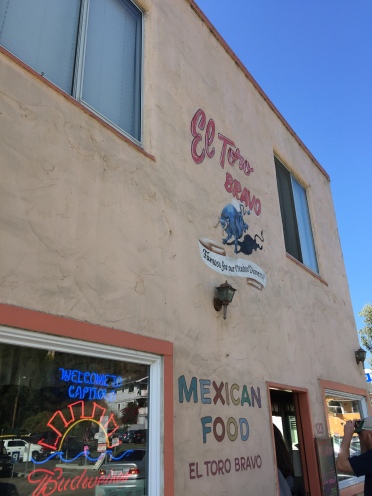 As I mentioned in my previous post about our trip to California, if you choose a vacation destination where you can visit a friend, you just might get to experience some things you wouldn’t have otherwise.

El Toro Bravo only has a beer and wine licenses; so their margaritas and sangrias are made with wine only. 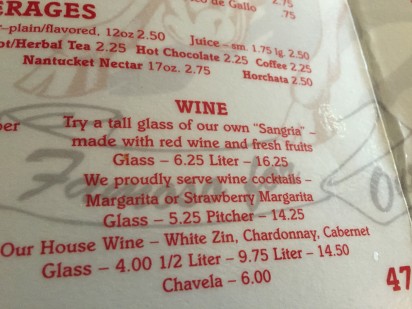 I don’t know why I ordered a margarita when I don’t like the sweet and sour mix that is so often used! Jenny’s sangria was much, much better. Ordering remorse!

But there was no ordering remorse when it came to lunch! The chimichangas here are grilled! 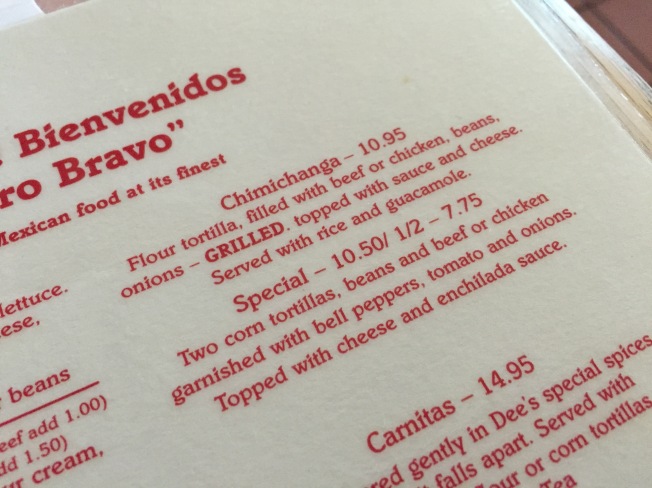 And they were all sorts of deliciousness. We each had our own, but truth be told, they could have been split. 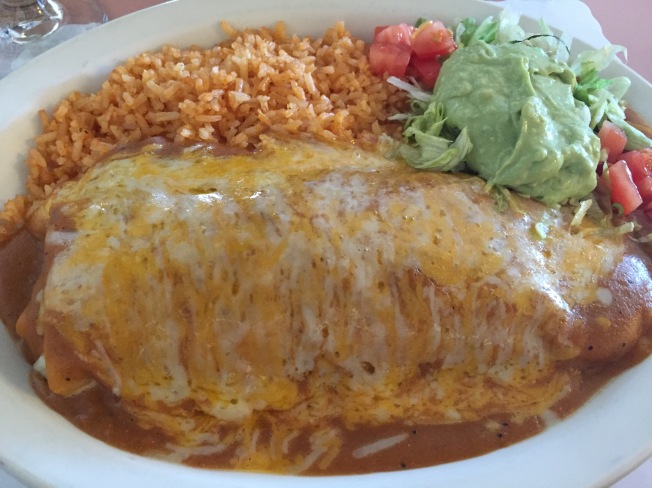 Our last stop before heading back north was to a very special winery. Shondra and her mom lived at Bargetto Winery for a bit while she was a baby. 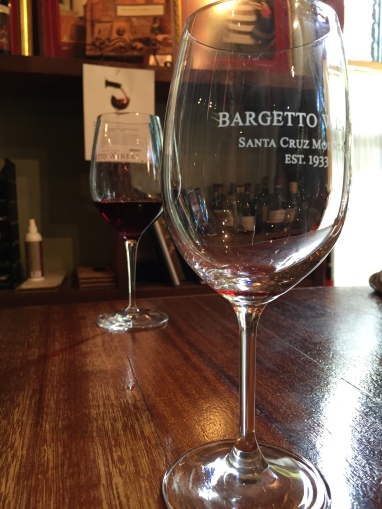 What’s more is that when I did in-home wine tastings with the Traveling Vineyard, Bargetto supplied our pinot grigio! We just had to stop for a tasting. 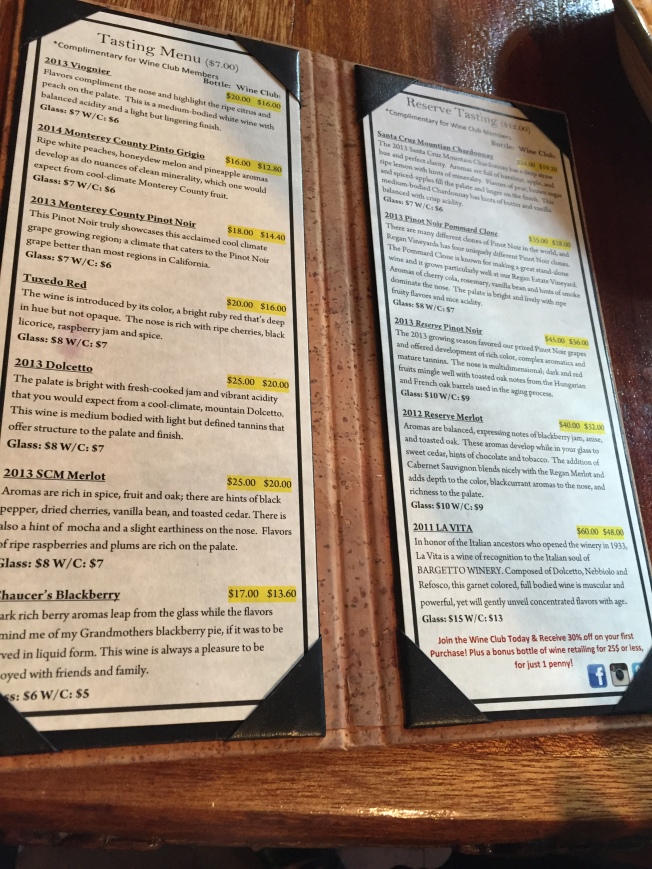 We did the Reserve Tasting. Our bartender had to open a new bottle of one of the higher end reds for us. He used this interesting new-to-me aerator! 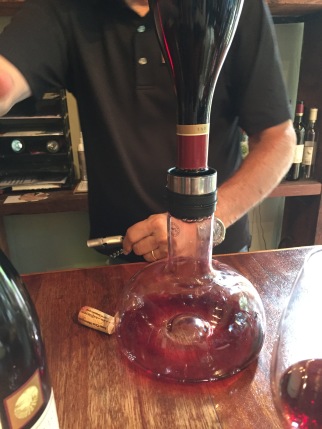 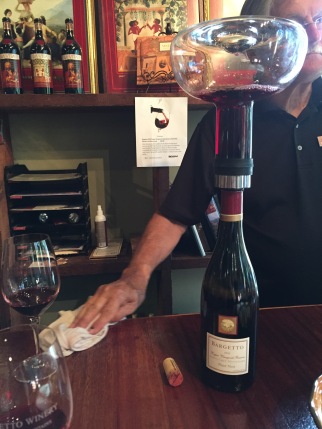 Just empty  the bottle into the vessel…

And then immediately empty it back into the bottle!

It was the perfect day along the coast. The next day was Packer Game Day, which you can read about here. Did you know the San Francisco 49ers Levi Stadium is actually located in Santa Ana, which is a short train ride away from San Jose? That’s where Shondra secured us a stay for the night to make the next day go ever-so-smoothly.

Describe one of your favorite drives or day trips.