We found The Bottle Room completely by accident, as we were driving back to my parents house while there for a weekend in 2012. Rob spotted it and I took the roundabout all the way around to go back to it! 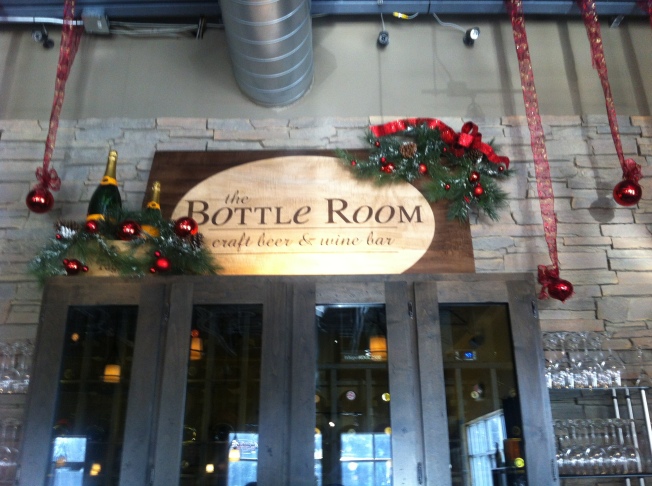 When I moved to the Twin Cities from Green Bay in 2002, there wasn’t even a coffee shop near my parents’ place. Not even a Starbucks in the entire city.

Now I can’t even think of a decent wine “South of the River” in the Minneapolis/St. Paul suburbs where we live. Not only was this wine bar in Green Bay, but it was just minutes away from where my parents lived.

While I was growing up, there wasn’t really anything nearby because we lived more on the outskirts of Green Bay near the villages of Howard and Suamico. Ordering pizza in was unheard of. But now, Lineville Road is lined with restaurants, grocery stores, multiple gas stations, an auto parts store, a Shopko, a bowling alley and now…

We walked in that evening to find a much larger than expected space filled with people, live music and great ambiance. We were highly impressed and felt instantly at ease…

We’ve been back to The Bottle Room every visit to Green Bay since then.

They have a lot to offer… For instance, their Wine Flights: 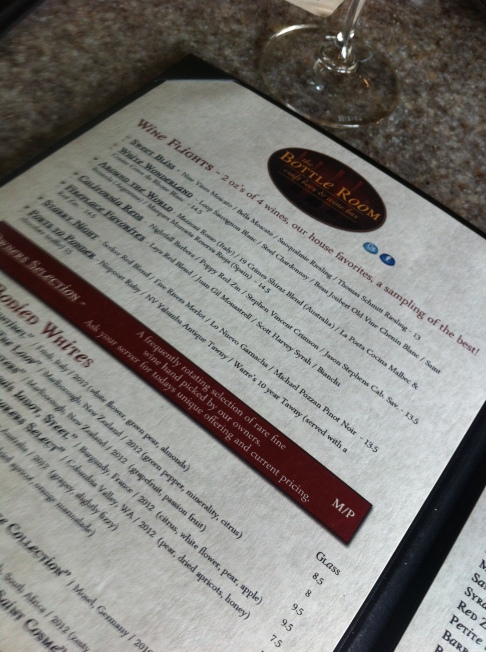 When I told my fellow Wineaux friend Jenny about this place, she knew she wanted to stop there when she came to town for a Packer Game. These next several photos are courtesy of her. {Thanks, Jenny!}

That night, most of the gang went with the wine flights. 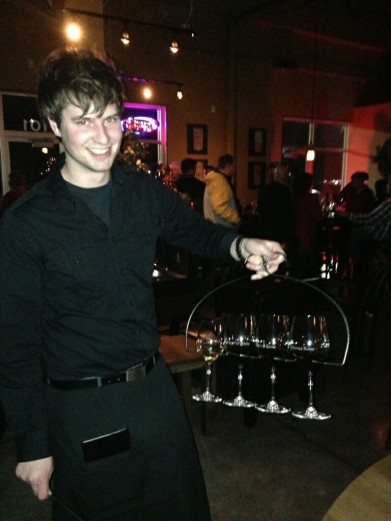 My dad with his whites and Rob with his reds: 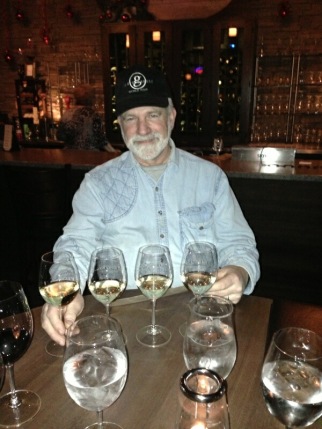 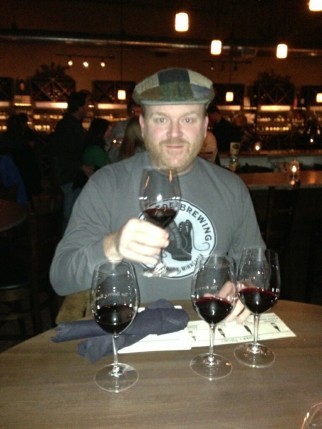 Jenny ordered a mixed flight of sorts that was available at the time: 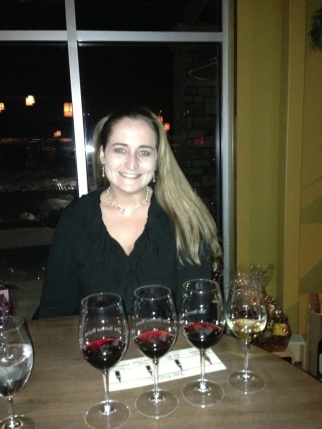 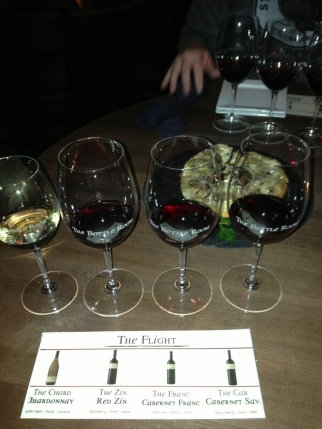 That night, I wasn’t feeling the flights, so I went with a cocktail: 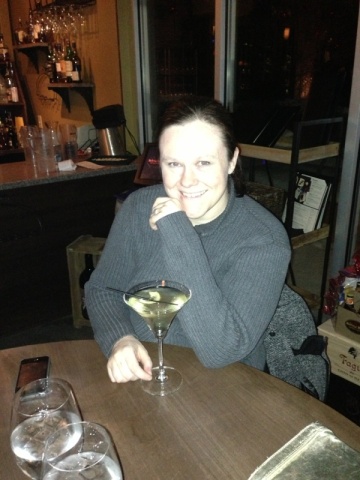 Can you guess which cocktail I enjoyed? 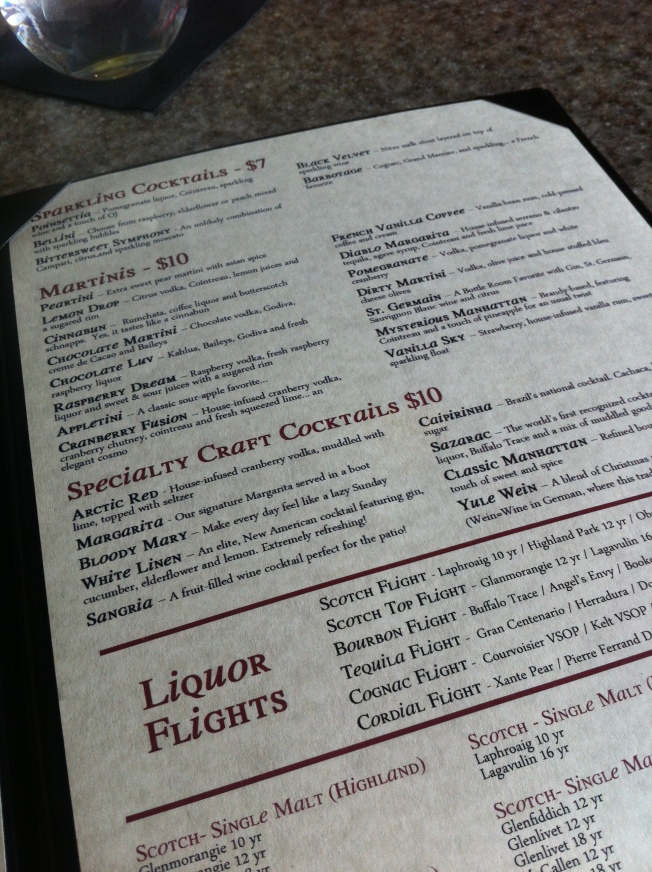 I like, too, that they offer liquor flights. What a better way to learn what you like than spend a ton of money on a bottle of liquor at a store.

And there is more to their menu than the usual run-of the mill wines. They do have some interesting lesser-known options. 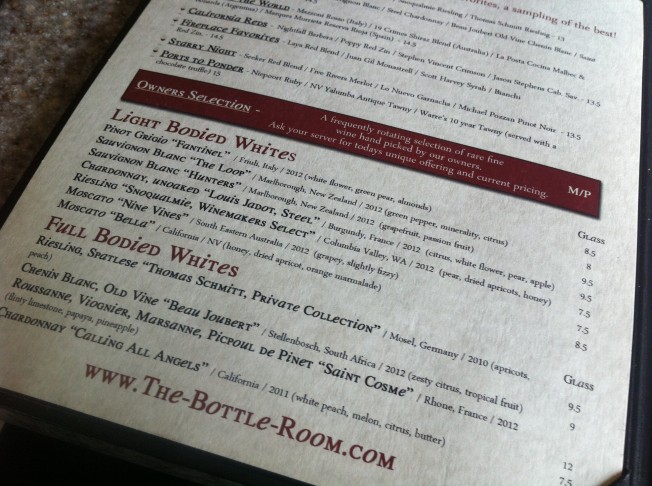 But I do wonder how the business thrives here. The prices seem more on par with the Twin Cities, not those of Green Bay. I couldn’t imagine that a lot of people would pay these prices in this area. But the place was packed that first night we were there and when we went back with Jenny! 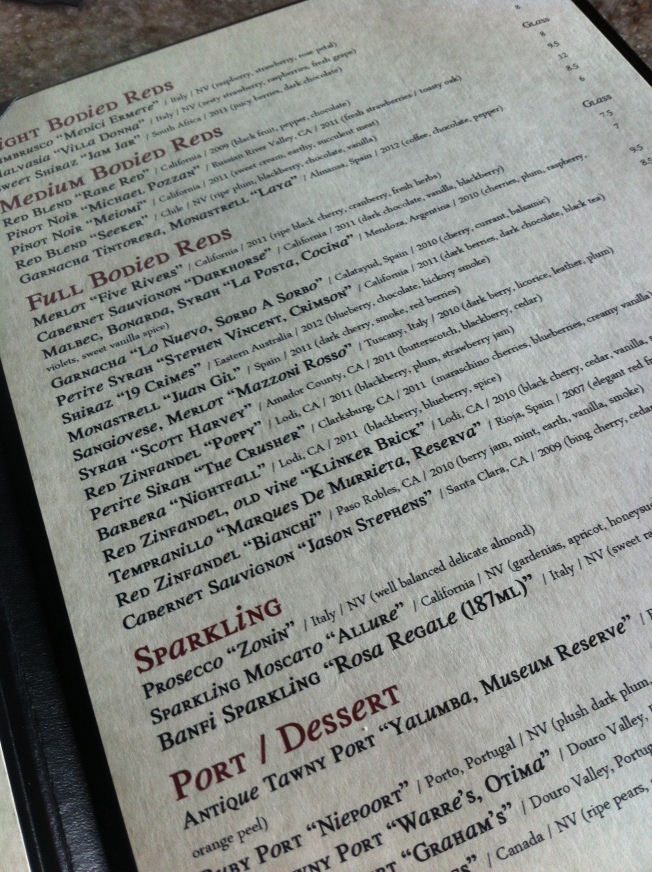 One of my favorite things to order here, though, is a flight of ports. It comes with a chocolate truffle!

Those truffles are sooooo good, that I’ve been known to just order a glass of port and a few truffles a la carte… 😉 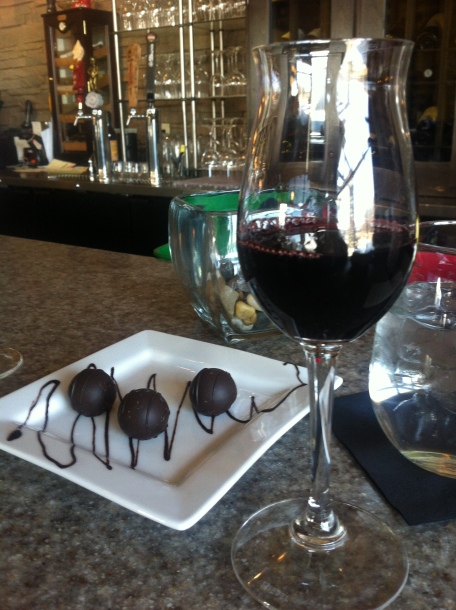 They have a few ever-changing craft beer selections on tap, too: 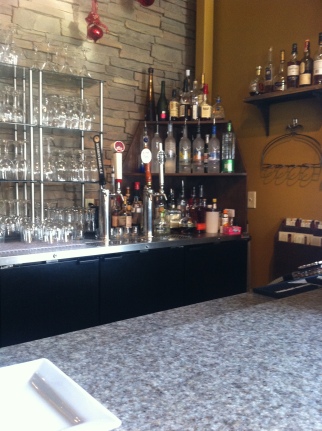 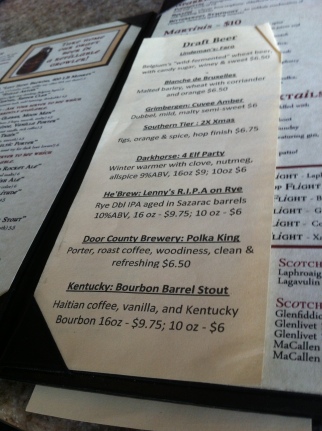 You can even take home the draft beer in a refillable growler! There’s also an extensive list of beers by the bottle: 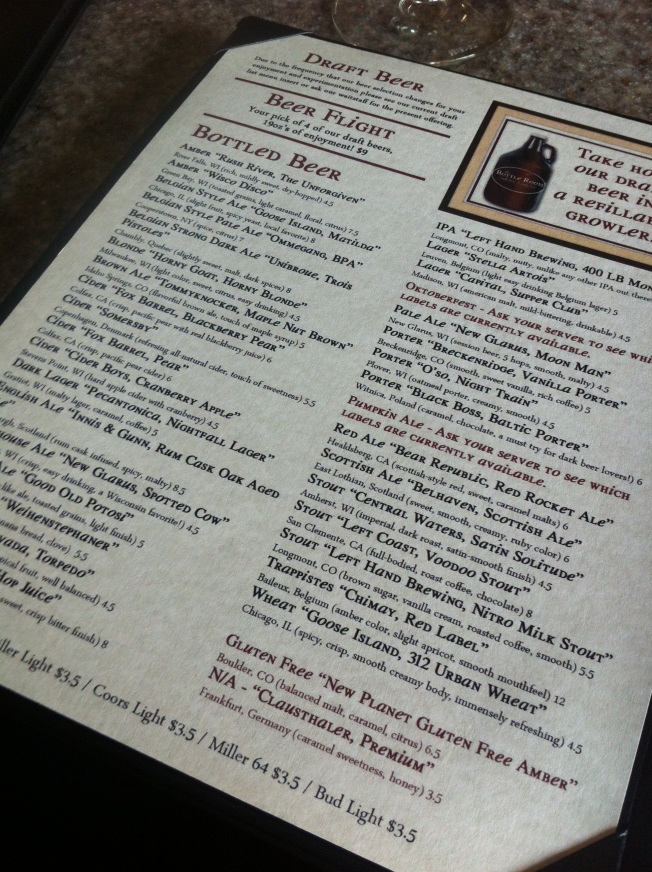 With over 75 wines and all of those beers, you’d think that’d be enough to be called The Bottle Room. But it is also a retail space. You can buy any of the wines that you liked to take home with you.

The selections line the wall: 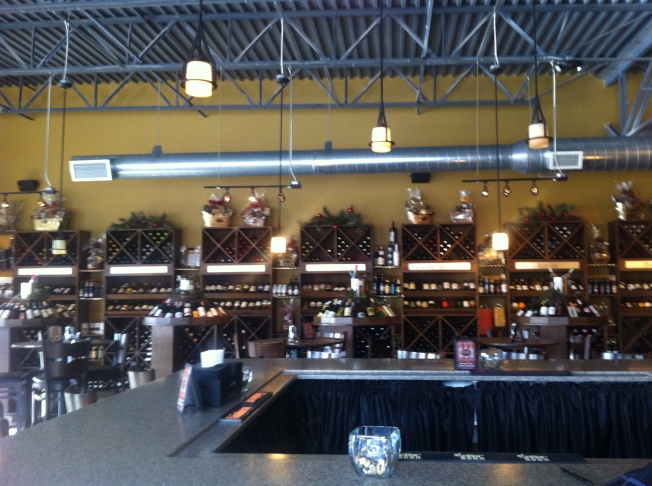 There is food, too. They describe it as tapas-style. I wouldn’t go that far. It’s more a selection of small plates, mini pizzas and sandwiches. 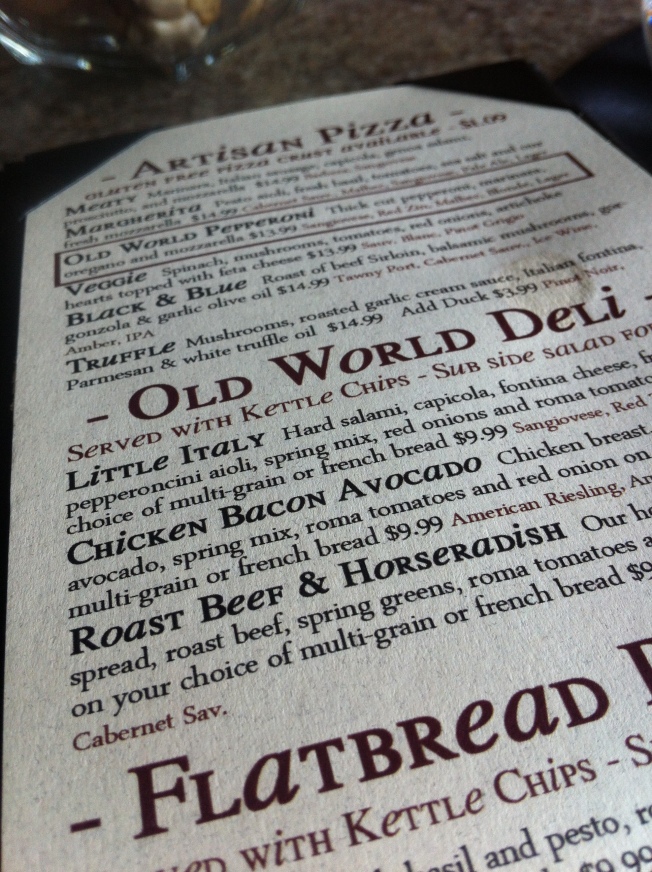 Rob adored the Truffle Pizza on our first visit so much that he was disappointed that he tried the Old World Pepperoni the next time. Besides $14 – $15 is a lot for such a small pizza. I mean, even we wouldn’t pay that in the Twin Cities. 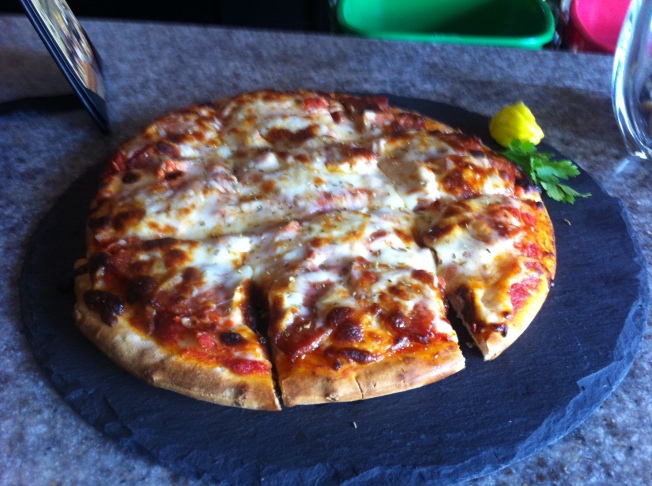 One day, as I was thumbing through an issue of Wine Spectator Magazine, I saw The Bottle Room listed with an Award of Excellence! If I remember correctly, it was noted as a new wine bar and a new winner of that award. I wasn’t surprised.

I dream of having a place like this “South of the River!”

I only have one gripe about The Bottle Room. We visited one afternoon with my mom and were the only people there. My mom ordered a cup of coffee. When she finished her cup, she had to ask for a refill. When we got our bill, they charged her for two coffees for a total of $6. That just seems kind of ridiculous to me. They had to brew the pot regardless if she had one cup or two. It wasn’t like it was an espresso or specialty coffee.

Still, we’ll continue to return because we love the selection and ambiance and don’t know how long The Bottle Room will thrive in this market. We sure hope it does. It’s a little slice of heaven in Green Bay, if you ask me…

Do you have a favorite wine bar near you?