If you are newer to wine or stick to well-known varietals such as Merlot, Cabernet Sauvignon and Pinot Noir, you may not have heard of Grenache. But you may have had it!

Grenache is a red grape varietal grown mostly in the Rhone Valley in France. If you’ve ever had a Côtes du Rhône or a wine from the region, it probably was made with Grenache. Grenache is most often blended with Syrah and Mouvedre. In Spain, it’s called Garnacha and is regularly blended with Tempranillo.

Why does it make such a great blending grape? Because it adds lots of fruity berry flavors without all of the tannins. There’s a bit of acidity to add structure and sometimes a bit a spice. Rob waivers on Grenache, because sometimes he finds a hint of white pepper – which he does not like!

You may have also seen Grenache from the New World, as well. When I used to do in-home wine tastings, one of my favorites was the Catch a Thief Grenache from McLaren Vale, South Australia. Then, when I earned an all-expense paid trip to Napa, California, one of my favorite Grenaches came from one of The Traveling Vineyard’s suppliers, Stonehedge. I splurged on a case of the $30 bottle because we were offered a significant discount. Absolute heaven.

So you can imagine how delighted we were when we received a Grenache in our South Coast Wine Club shipment. 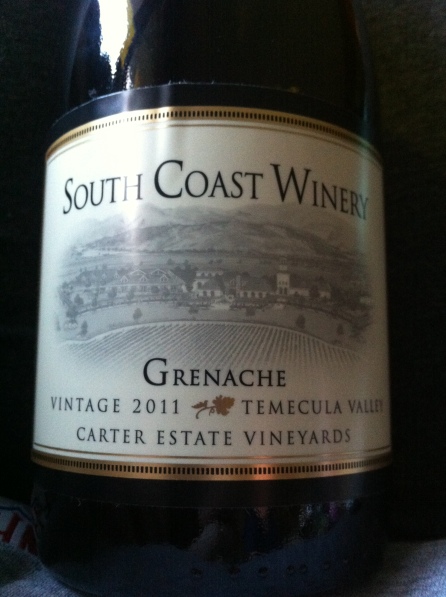 When we were in Temecula, California last year, we found that a lot of vineyards produced wines made from Rhone Valley grapes. Perhaps the climate is somewhat similar to that of the southern France and Spain. Still, the Grenache vine is a hardy one that survives better than most others in windy and drier conditions, much like the semi-arid climate of the Old Southwest. 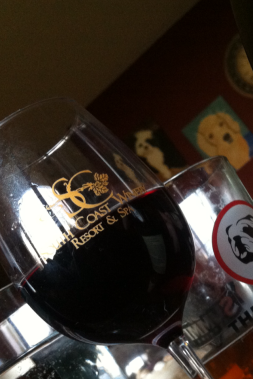 The Grenache grape depends on a long growing season to ripen, which in turn leads to high sugar levels and the potential for a wine with high alcohol content. You will find this with many New World Grenaches. However, Rhone Valley wines can be dialed back with the other blending grapes.

Here is what our South Coast Temecula Valley Grenache had to offer: 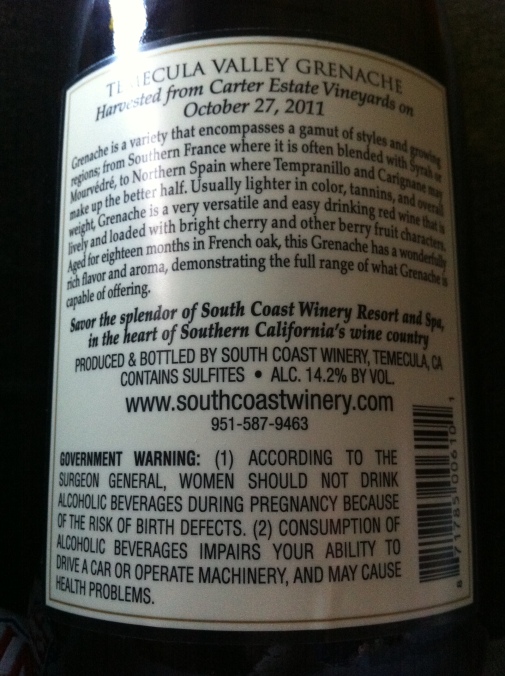 While this was probably one of my least favorite South Coast wines, it was still very good. What I tasted was a hint of eucalyptus, which brought me back to the days when I had a really bad Petit Verdot from Australia. That one was all eucalyptus and not palatable at all. Here, there was only a hint, which may have even been the violet or lavender they include in the description.

For a bit more information about Grenache, check out these fun facts.

Have you had Grenache before?

Alone or in a blend?

What are your thoughts?