I really, wanted to like Signature Café when I went there with the girls last weekend. It’s a small restaurant that focuses on local and sustainable foods and wines. I’m all about supporting that kind of thing!

When I pulled up the menu online, I saw that they have a Chef’s Tasting Menu that changes weekly for just $30! This includes four courses that change weekly. Wine Pairing can be added for $15. When I read this menu for the week, I was stoked:

Every piece of that menu intrigued me! However, in talking with the girls on our way to the restaurant, I learned that I had mistaken. This was the 4-course meal for the following week. I totally missed the current menu, which consisted of some barbecue beef, firecracker coleslaw and basically nothing which suits my palate. I was going to have to order off the menu.

Signature Café is located in a beautiful residential neighborhood of the Prospect Park/East River Road area of Minneapolis. It was too cold to sit out in the outdoor patio, but I loved the twinkle lights! And the ambiance inside was cozy, too.

There were some unique wines on the menu. I was quite surprised to see a wine from Traverse City, Michigan on it! I haven’t seen those wines outside of Michigan before. It must have made Signature’s menu due to the vineyard’s sustainability.

Since we all decided that we were either having chicken or fish, we selected a Pinot Gris, from the Willamette Valley in Washington: 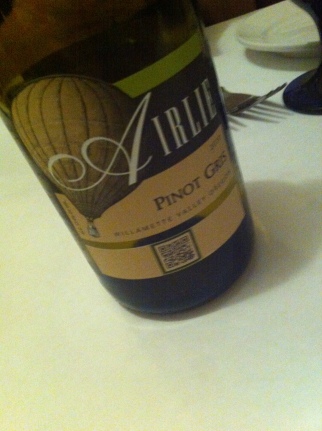 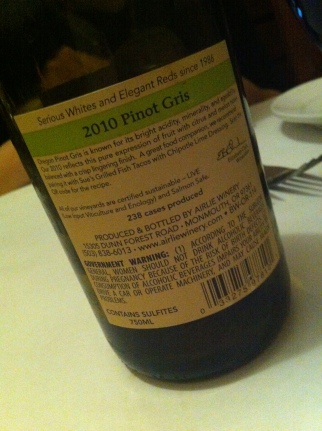 I have to admit, I cannot describe this wine. We had no problem knocking it back, but I can’t tell you much about it. I think I was lost in the conversation with the girlies!

To be quite honest, we were all underwhelmed by our food. The flavors weren’t all that enticing and it tasted more like a home-cook made them. When I dine out, I want it to taste better than that. 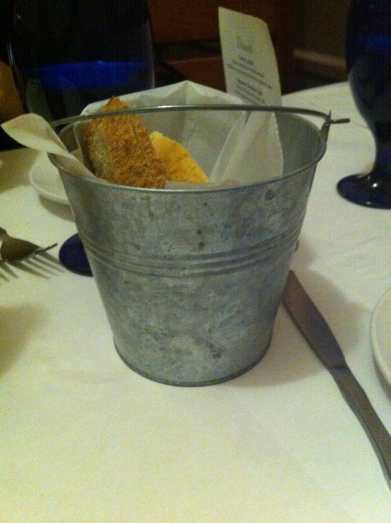 The bread in the bucket was a cute touch. The bread is supposed to be homemade, but was kind of mushy and not very satisfying. I’d pass up on the bread bucket next time. 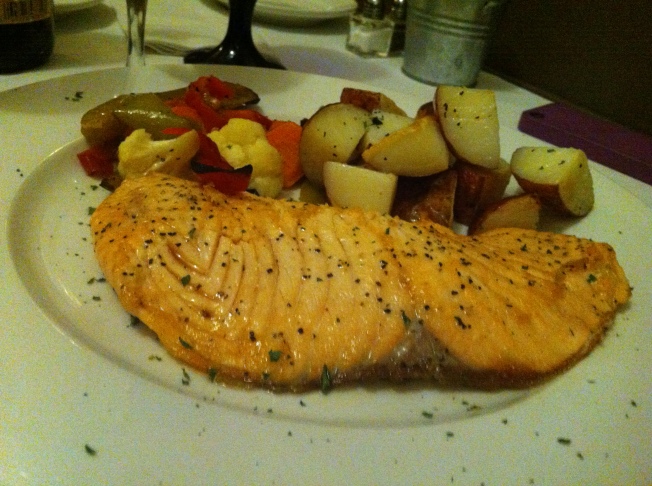 Kim’s piece of salmon was huge! She orders salmon a lot and was unimpressed by this one. She was bummed when on her first bite, it tasted fishy. Yes, it’s fish, but it shouldn’t taste the way it did. 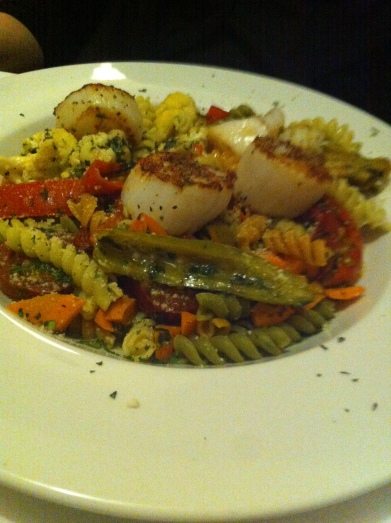 Jen chose the featured pasta, which I believe was dressed with a white wine sauce. She said the scallops were cooked just fine; but that the dish, overall, was bland. It, too, was a lot of food. She took the leftovers home. 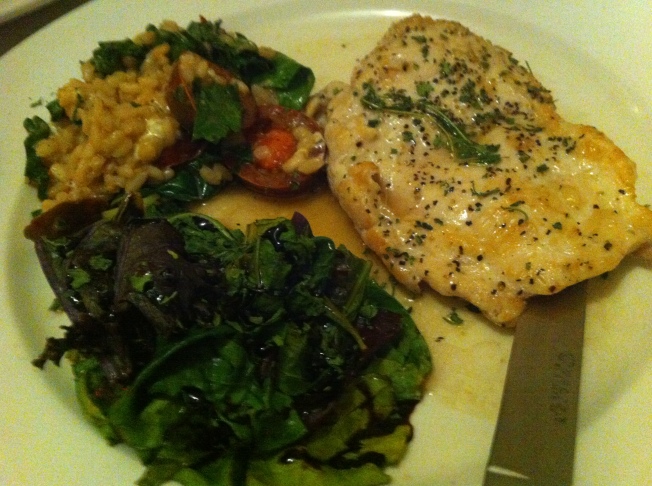 There is a reason why you don’t see “chicken breast” on many restaurant menus. They aren’t very exciting and anyone can make them. I chose it because the seasoning sounded good and the dish sounded healthier. However, it did taste like something I could just make at home. {If I can ever make chicken!} And it wasn’t trimmed. I got a few of those fatty, grizzly, cartilage-y pieces on the edges. Ewwww!

The risotto was a tomato and spinach one with gorgonzola. It wasn’t bad. And the sauteed greens were seasoned nicely.

One of the things I really did like about Signature Café was that you can pick your own sides.

The other thing I liked? They belong to a program called Eatiply. It’s a meal-for-meal donation program. For each meal that you purchase at an Eatiply-participating restaurant, a meal is donated to local food banks to help fight hunger. It’s the first time I’d heard of such a thing. Kudos to Signature Café for participating!

Do you ever find that when you aren’t satisfied with a meal, you just want something else? I mean, you might not necessarily be hungry, but your lack of satisfaction leaves you with an empty sort of feeling.

This happens to me when I put all my love and care making something and it turns out okay enough to eat, but not something I’d make again.

I can’t speak for the other girls if this feeling was the case for them that evening. But Kim said that she was in the mood for dessert. I suggested that since this place didn’t satisfy us that we go somewhere else for a sweet treat. We each got out our Smartphones and used various apps to find something close by with dessert.

It’s not a dessert-specific place, but it was nearby and after pulling up the menu and finding Izzy’s Ice Cream along with some delectable sounding desserts, we were sold.

We had no idea how busy it would be, if they’d have room for us or if it would be strange there to just pop in for dessert. But everything worked out just fine.

It was too dark in there for photos. No would do these desserts justice anyway. But he’s an account of our experience…

I was the creepy girl at the bar asking the guy next to her anything and everything about his burger. He saw me eyeing it when we arrived, so I took the opportunity to have the discussion. It looked like one Rob would love! It’s another restaurant that supports local farmers who use sustainable and organic practices. And with four local beers on tap, I think I just may be taking a trip back.

Do you ever go out just for dessert?

What’s your favorite place to have dessert where you live?

As I mentioned, this past weekend, after my cooking and cleaning frenzy, my friend Jen and I attended The Homegrown Experience at the beautiful Nicollet Island Pavilion in Minneapolis.

I would have never known about this if if wasn’t for Goldstar. It’s a another Daily Deal site. And you know how I love those! I would have never known about this event if I hadn’t received the email. And this was its third year in existence! Since I prefer to eat and cook with fresh, quality ingredients and I love supporting the local community, I jumped at the chance to check this it out. 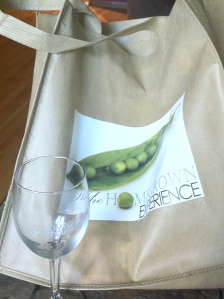 Upon checking in, we received bags and wine glasses along with some coupons and advertisements. This was included in the ticket price as well as the tasting samples we were about to receive!

I really wouldn’t have called it a “Food and Wine Festival” as Goldstar described. There wasn’t much wine being poured. However, despite my affection for wine, that wasn’t my reason for being there. I wanted to learn more about local, organic and sustainable food in the Twin Cities metro area.

And so we did.

There were so many wonderful samples that I’m sure we made a meal out of it. There were all sorts of vendors including co-ops, non-profits and restaurants that use local or sustainable ingredients. Products included wine, beer, spices, bbq sauces, chocolates and candies, oils, coffee, beauty products, cheese, ice cream and more. We made our way through all of the booths, but patience was key. There were so many people! The lines were long and went extremely slowly. Some people popped in and out of booths, which caused even greater delays in the lines. I’m not sure if the lines were meant to be there, or if we, as the crowd, created them though!

My favorite bite was provided by one of the Eastside Co-op – just a simple crostini with colorful tomatoes, basil and a drizzle of olive oil. They had some excellent chocolate we nibbled on as well.

Truth be told, while I recognized some of the restaurants, I was unaware of the majority of the businesses showcasing their products and services! I collected a lot of brochures, pamphlets and business cards. In fact, now that I think about it, I picked up a few magazines/catalogs, too. In my weekend cleaning frenzy, they must have ended up in a pile somewhere. I have to find them! I’m most looking forward to the current issue of Edible Twin Cities!

However, probably the most interesting discovery to us was Twin Cities Local Food. When we approached their both, we saw this: 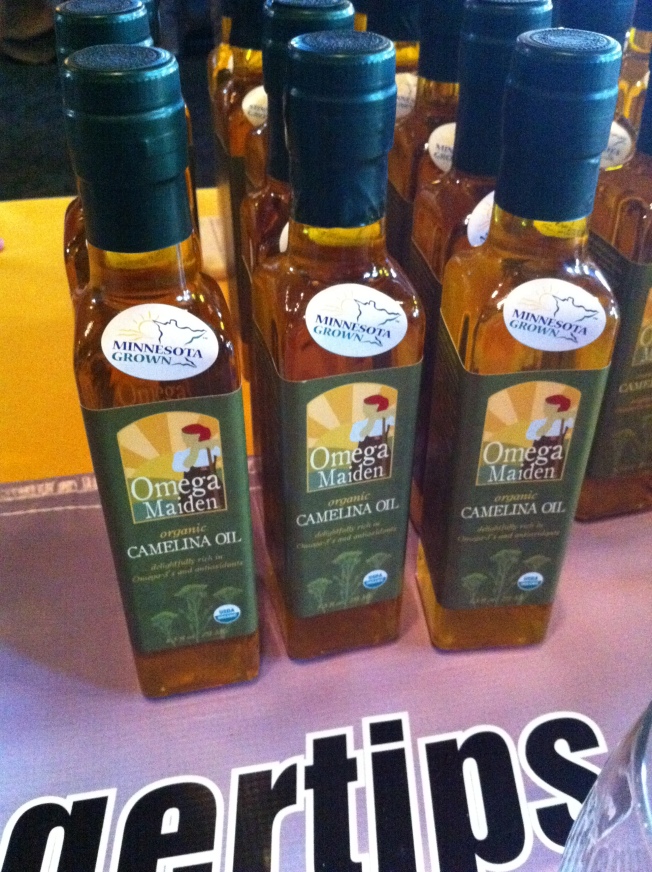 “What’s camelina oil?” You ask? I did, too. Camelina is a wild flax chock full of those healthy omega-3 fatty acids. You can learn more about camelina here. The camelina oil was used in a dressing and bread was offered for dipping to sample. But why was Twin Cities Local Food showcasing it?

Because local farmers and producers of local food products are offered through the Twin Cities Local Food online marketplace! As a member, you place your order online by Wednesday morning.  By Thursday afternoon, your order is ready for pickup at the location of your choosing. There is a drop off site in Minneapolis, St. Paul and Savage. SAVAGE! We south-of-the-river girls were excited about that!

We were told that the produce is picked up from local farmers the same day, so everything you get is fresh, fresh. It’s the perfect alternative to a CSA. You get the choice of what you’d like and what you know you will use that week. A win-win! We are seriously thinking of giving this a try. {P.S. It’s a year-round service!}

Currently, memberships with Twin Cities Local Food are $10 for one month, $35 for six months and $50 for a year. You can even place two orders without a membership just to give it a try. But really, $50 a year? If you go once a week, that’s less than a $1 to have fresh, local produce of your choosing delivered to one location? Or, look at it this way: It’s less than $4 a month. You’d pay more for shipping on anything you order online!

Where is your favorite place to shop for fresh, local produce?