I chose Café Ena to dine one evening when my husband said that he’d take me anywhere for dinner when our Friday night plans got messed up. It was kind of a last minute decision, but I love this neighborhood of South Minneapolis and also knew that it would be hard to get him there otherwise with so many other great restaurants around. It was also the night before our Dog Day 5k walk.

We started off with a bottle of Tempranillo. I mean, it is Latin Fusion Cuisine, right? I haven’t been ordering wine in restaurants lately because they are so overpriced. I know I can get a good quality pint of beer for $4 or $5, but a glass of mediocre, often open-too-long, wine is about $8-$12 per glass. Bottles of wine are usually double or triple the retail price. So if I want something decent tasting, I’m paying $50/bottle or more. But I digress. This wine was decent.

I was in a chicken mood and had been trying to decide between the Pollo and the Ena {chicken filled ravioli} dishes. When this happens, I usually ask for guidance from the server. And while I know it’s annoying to them, I do like to hear their opinions. However, Jaime was not giving up his thoughts. Instead, he just went a little more in depth with the descriptions. He did say that the Pollo was a little more filling than the Ena, which, in the end, helped me to choose. 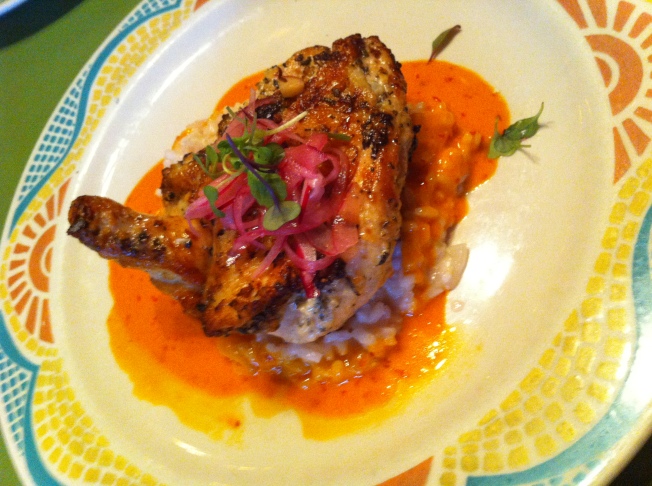 This was some of the most flavorful and juicy chicken I’ve had! I was quite satisfied with this dish. The risotto was good, too. I made Rob take a taste and he was blown away. Perfectly al dente and highly flavorful, he said it’s some of the best risotto he’s had. It’s hard to convince him of that when he loves the Parmesan risotto so much at Sul Lago.

Rob doesn’t really ever discuss with me what he is thinking of ordering. And he never asks the server for advice, either. Sometimes, he even tells me that he is ordering something different from what he actually orders. This time it was the: 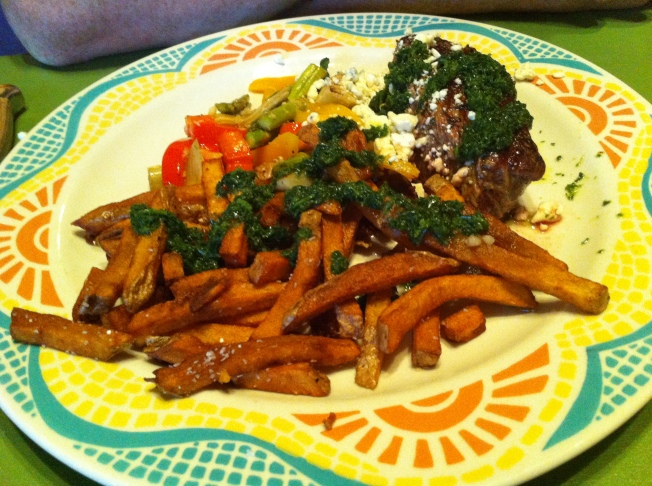 I’m not sure why this is described as “chorizo”, but Rob loved it. He said he’d order it again any day. The fries were mediocre, but that really wasn’t what we were there for anyway.

What threw me off guard was the ambiance. I expected it to be dim, quiet and intimate. However, the interior was bright and despite the great Latin decor, the way the booths and tables were set up, I felt a little like I was at Denny’s. I apologize for that description because the food is totally worth checking the place out. That may be why many people were getting food to go. You know, I always forget about to-go orders. I need to remember that when we don’t feel like going out, but I also don’t feel like cooking.

My plan is to take my girlfriends back here. It seemed like a place that they’d enjoy. But that night, Rob and I skipped dessert. Instead, we went for a nightcap across the street. More on that later this week…

Where do you go that you love the food but aren’t as fond of the ambiance?

What is your favorite place to pick up food to-go?