Over the holidays, Rob and I spent more time than usual indulging in the wonderful restaurants that cover our Twin Cities. One of these visits was spur-of-the-moment, right after work on a Wednesday. Rob just wanted to have The Burger at Revival, a new-ish southern-style restaurant known for its fried chicken.

I had already tried out Revival with the girls since Rob can’t do chicken. Despite the accolades, impressed I was not. However, Rob’s and my visit was notably different.

The girls and I arrived early at Revival one early summer evening. We checked in and the small room was already packed. There wasn’t even room at the small bar.

We put our name on the waiting list by giving my cell phone number. I would be texted as soon as a table was ready. This means, you could get a drink and pop outside or go across the street to The Lowbrow for a pint, if you’d like!

While the restaurant itself is not that big, the ceilings are high and provide some of the worst acoustics. You can barely hear the people sitting across from you. And while they may be trying to go retro with this wallpaper, it’s just not my style.

The menu is pretty simplistic and the prices very reasonable. The girls and I were there for the newly famed fried chicken. 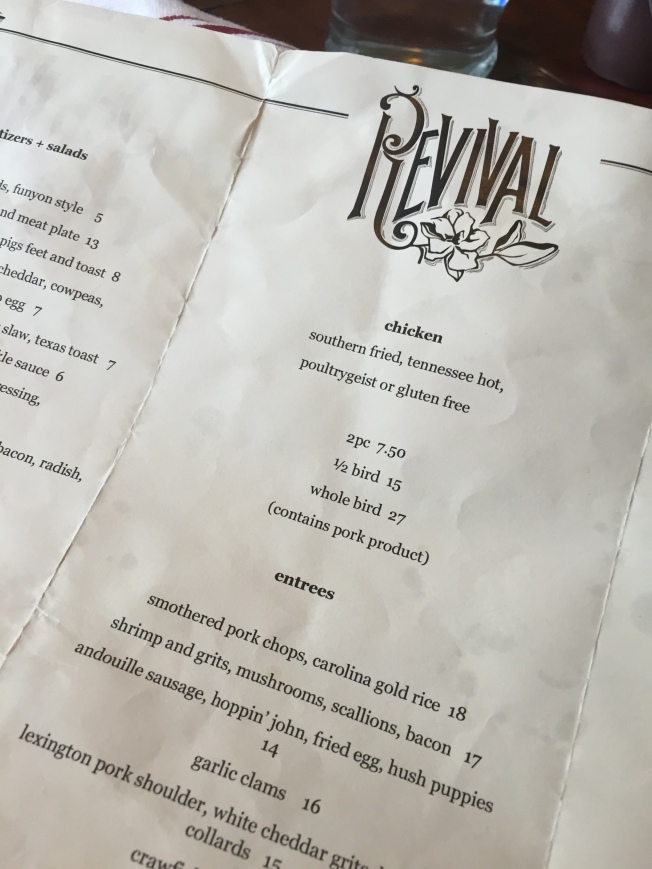 Since my friends don’t tend to like things to spicy, we went with the Southern Fried Chicken. The Poultrygeist is made with ghost peppers are were told that even if we like very spicy foods, we should heed with caution! We also ordered a few southern sides to share.

We also ordered an appetizer to start. Here was my portion. I know it doesn’t look as appetizing as a freshly plated dish! 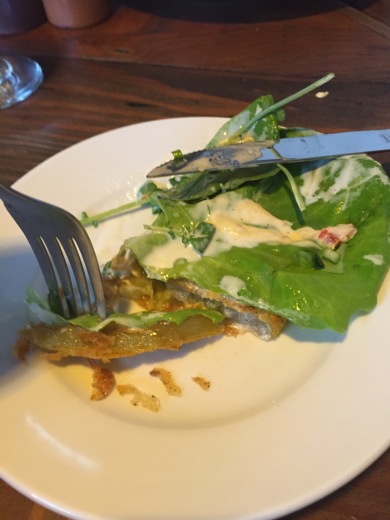 It was fine, but nothing I needed to have again. Then we waited. We waited for a good 30 – 40 minutes. I tried to be understanding because I know fried chicken can take some time and you need to have it prepared in advance, having worked at KFC in high school. Still, other tables were getting their food, some seated after us.

And for whatever reason, I only took one other photo that evening:

Of the three of us, Jen loves hush puppies the most. However, none of us were particularly impressed with them. I like mine lightly battered with chunks of corn here and there. Is that traditional? I don’t know. But these were also overcooked. In fact, our chicken seemed to be, too!

We couldn’t understand all of the hype. It’s almost like this chicken had been sitting around awhile. Maybe all of our food had been? The thing is, the restaurant is so small that our waiter could not have forgotten about us. I guess I just need to be more assertive and ask more questions when waiting for that length of time.

In any case, these two homemade sauces are offered and helped the chicken:

Overall, the girls and I went away underwhelmed. Still, I noticed a burger while we were waiting near the bar that looked scrumptious…

When it showed up on this list of Best Burgers, I knew that I would be willing to give Revival another chance if Rob asked. Then, after some research, I learned what people were most raving about at Revival was the Tennessee Hot Fried Chicken.

So when  Rob suggested we hurry off to Revival split a burger that Wednesday before the New Year, I countered with him to eat his own Damn Burger while I tried a 2-piece of the Tennessee Hot chicken! {Okay, so I didn’t really say that. But he didn’t argue when I suggested it!}

That is just what we did. Rob ordered his burger. I ordered the chicken; and we picked a couple of sides. Our server told us that there was an up charge for the Mac + Cheese. Later, we concluded that she was substituting whatever comes with the burger with the Mac & Cheese rather than delivering it as an extra side. No matter. It was plenty of food! 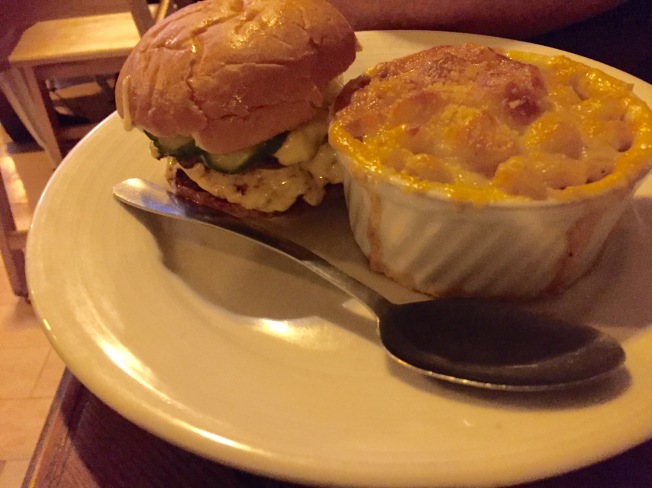 Rob allowed me first bite of his burger and I have to say that the meat was juicy and the full of flavor! However, I thought the bun tasted too “bready” overall. It could have been seared a bit longer, perhaps. Rob loved the burger, but it didn’t couldn’t push the burgers at Parlour or Saint Dinette out of the running for his best burgers.

As for the Mac + Cheese – I loved it. I found it creamy and flavorful, two things that many restaurants seem to forget are what makes any mac and cheese stand out from another. But Rob wasn’t as much in love as I was.

For our second side, I was debating between the White Cheddar Grits and the Collard Greens. Rob made a good point that we’d only be comparing the grits to the mac and one would be enough. I went with the Collard Greens since I learned at Brasa how much I love them!

They were probably traditional, but boring.

Instead, I focused on my chicken:

Yes, this is spicy. No, my friend Jen would not have liked it. But I loved it. Yes! Yes! This is what they were all talking about! Flavor, crispy, juicy – everything I wanted. {And I still believe the regular chicken we had on the first visit was either over cooked or sitting out too long.}

My second trip to Revival revived my faith in not only their restaurant, but my trust in The People’s opinion. I now have a go-to meal when I go next dine there: Tennessee Hot Chicken and Mac & Cheese. Now, if only I can get Rob there over St. Dinette or Parlour…

What’s the best fried chicken you’ve ever had?