About a month ago, Rob and I were off to a concert in downtown Minneapolis and were looking for a place to dine pre-show that was within walking distance of the venue.

I’d been there probably ten years back, but only stopped for drinks. I don’t even think I lived in Minnesota quite yet. Perhaps I was visiting a friend? I didn’t really remember much about it, except that it was one of those really packed bars you go to… like when you’re in college.

I believe this place has been around since the 80s. By the looks of the interior, I don’t think much has changed. But that shouldn’t keep you from going there. In fact, one of the reasons Rob and I chose The Loon {which it is affectionately called here in Mpls} was that it has earned awards for its chili and burgers!

We decided to be the judge of that.

I checked out the menu online prior to our visit. If we had the Internet in the 80s, then this is probably what the website would look like! No, that’s not quite right. An 80s website would be all DOS and dot matrix, right?! But their website (like my blog) does need a bit of an overhaul. {Any takers!?} I don’t think it’s a priority for them, though. Based on their downtown Minneapolis location, within easy walking distance of the Target Center and Target Field, they’ll get traffic whether they updat their website or not.

Still, there was no online beer or drink menu.

We arrived pretty early before our show, but the place was already pretty busy due to the NCHC Frozen Faceoff taking place at the Target Center that evening. {That’s the National Collegiate Hockey Conference Tournament, for those of you who are wondering.} Many of those sporting their University of North Dakota apparel were already having a good time. Despite the fact that The Loon is by no means tiny, the crowd made me feel kind of like we were at a small town bar. Good people watching, for sure.

Luckily, we were able to pull up two seats to the bar.

The first thing we had to figure out was what to order to drink. There are no lists of beer selection online, so we weren’t sure what to expect. Due to the growing American craft beer movement in Minnesota, many bars and restaurants in Minneapolis have a  pretty decent selection. Such is not the case at The Loon. If you are visiting Minnesota or Minneapolis for that reason and only have a bit of time, this is not the place to stop. Here, you will find the local Summit EPA and Grainbelt Nordeast, which are proper, somewhat-historic local representations in their own right. They just really aren’t my style, nor what I would consider “craft” brews.

For those of you looking for that online beer or drink menu, here is what was offered on March 21, 2014: 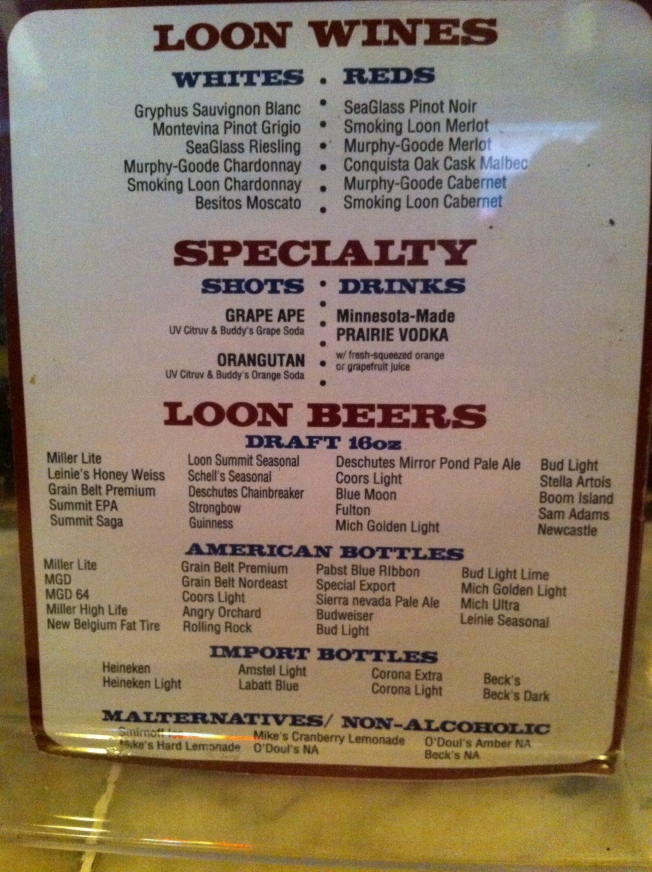 I see now that they had Fulton {an excellent Minneapolis craft brewery} on tap! It must have been the Lonely Blonde, because if it were the Sweet Child of Vine IPA, Rob would have ordered it. {Besides, there is no way Rob is going to order a “Lonely Blonde” at a bar with me sitting right next to him! Tee hee.}

As an aside, The Loon is the home of The Grape Ape, a shot made with vodka and a Minnesota grape soda. As much as Rob loves grape soda, he refused to order one. I mean, as a Packer fan, who would drink that purple stuff? 😉 I love that man.

I knew that I’d be getting the chili that night. {And it was the perfect night for it.} But my biggest question was which one to get! Decisions, decisions. Really, when you offer five different chilies on a menu, there should be something else you offer:

Because that is what I would have ordered! I love that there are so many different, regional styles of chili in the U.S. and that everyone is so passionate about how chili is supposed to made. To be honest, I’ve never really found a chili that I didn’t like. In Northeast Wisconsin, I grew up with spaghetti noodles in my chili. I didn’t know that noodles weren’t always in chili until I moved just a few hours west to Eau Claire, Wisconsin, to go to college. My Minnesota friends laughed at me that this was the trend that I knew!

I believe the chili that won the most awards for The Loon is the Pecos River Red Chili. They even serve it over at Target Field now. I’m going to have to remember that if I ever end up at a game there on a chilly {get it!?} or rainy day. I felt like that’s the chili I should have ordered at The Loon that night. But I wasn’t feeling it. I know that traditional Texas-style chili calls for it, but there’s something about cubed steak in my chili that turns me off. Maybe it’s the chance that the meat can be tough?

So here were my chili options:

Pecos River Red – (Served at Target Field) Their only chili that can be ordered mild, medium or hot. “Lean cubed sirloin steak and onions along with Tex-Mex spices and chile peppers. A classic Texas-style chili.”

Dirty Pork Stew – “A green chili pork stew loaded with onions, chiles, tomatoes, lean hand-cut chunks of pork in a delicious spicy garlic sauce. As served at the LaTolteca Tortelleria in Azusa, California for over forty years. We top it with cheese, green onions and sour cream. Served with flour tortillas.”

Pinto’s Diablo Chili – A Minnesota-born chili, created by Pinto, “this is a ground beef, kidney bean and veggie chili that is very hearty and pleasantly spiced.”

Veggie Chili – “A wonderful medley of veggies and beans simmered in a sweet-hot tomato base. Topped with green onions. Served with jalapeño corn bread & tortilla chips.”

I was having one of those days when I couldn’t make up my mind {aka most days}. I requested the advice of the bartender. He raved about all of them; but the one that stuck out when he was describing them was the Chicken Chili. And I’m so glad I ordered it! 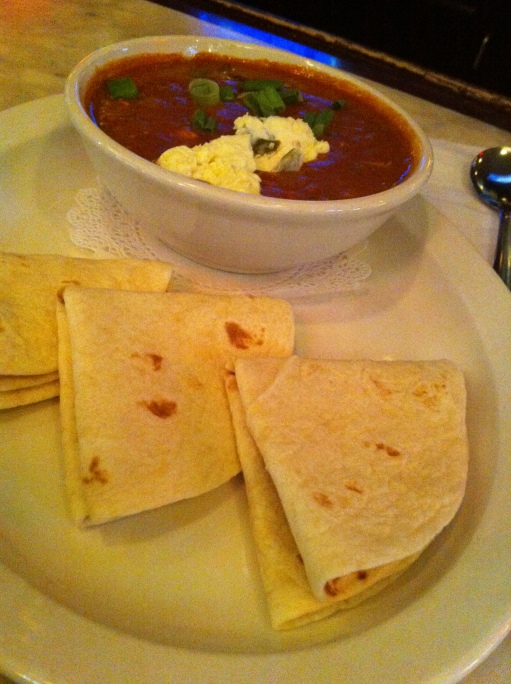 This chili hit the spot for me, especially with the yummy jalapeno cream cheese. I would get it again in a heartbeat! But I still wish I could have tried them all. Should we start a petition for a chili flight? Who’s in with me? 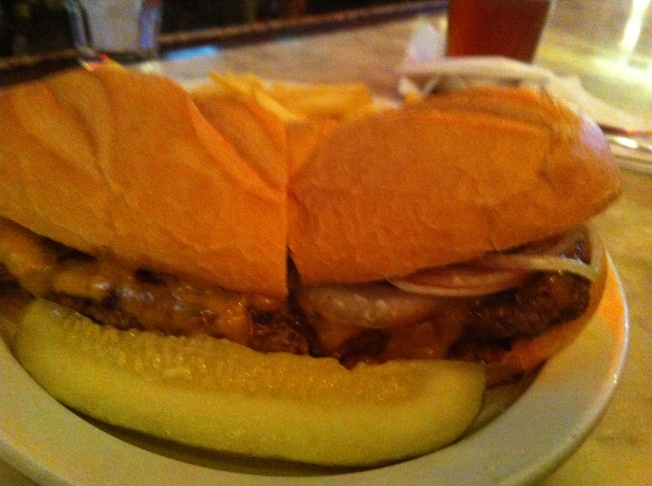 I was surprised when Rob chose to have his burger served on sourdough, as much as he loves rye. But it was like a sourdough baguette! The burger was pretty darn good. Not Top 10 good, but very good enough that either of us would order them again. Rob said that the meat quality was excellent and obviously shaped to the baguette. But overall, he found the flavor pretty bland. I didn’t realize this until I remembered that he ordered Cajun spices. I didn’t taste those at all. And fries? Just average, according to the fry-master.

Overall, The Loon offers mostly bar-style food. But I think the chili and burgers are the way to go here. If you are in from out of town and want to try a little “Minnesota Cuisine,” you might want to go with some creamy Wild Rice Soup. It’s perfect on a cold day. And if you’ve never had walleye before, give that a try, too.

What is the traditional style of chili where you live?

What is your favorite style of chili?