Sometimes, the only way to get my husband to try a restaurant is to buy a Groupon. We have to use it, right? There truly is Power in the Groupon!

Solera is a Spanish tapas bar in the Theater District of Minneapolis. I’d been there a few times with girlfriends. I love the concept of small plates and getting to try a bunch of different flavors. It was something my friend Jen and I loved when we were in Barcelona back in 2000.

I just feared that Rob would hate it. I feared that there would be little for him to eat {a lot of seafood on the menu} and that the plates would be too small. I feared he would go away hungry. I had even considered using the Groupon with a friend instead of Rob.

Then I thought, “No! I want him to try it!” And I knew that having the Groupon was the only way to get him there.

As a backup plan to quell both of our fears, I told him that if he was still hungry, we’d stop at the Scottish Pub next door afterward.

I’m so glad we went.

Because he loved it!

Rob hates downtown Minneapolis. I can’t stress this enough. While he loves dining there and going to concerts and sporting events, he detests navigating the city. He hates parking, construction, traffic and when there are so many people that you just can’t get a seat where you want to or arrive on time if reservations are made.

So I made sure to go at an off-time – on a Sunday afternoon, right when Solera opened. It was a beautiful day and we sat at the bar.

We started off by ordering a Spanish specialty and one that you know I like: 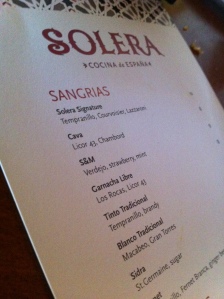 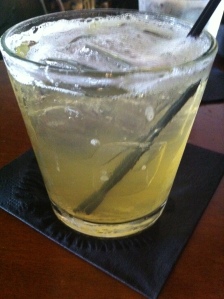 I’d never had a sangria made with hard cider before! It was actually made with Crispin, which is probably the only good thing that particular cider is good for. I just may be actioning my own Cider Sangria next summer! 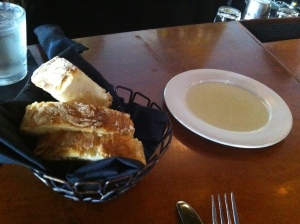 When you order tapas, the plates come out as they are ready. You are not served in courses or all at once. I like this concept because whatever you get will be hot and freshly prepared. In addition, if you are still hungry, you can order more. The bartender recommended 3 to 5 tapas for two people, because the size of them really depends on each dish.

First to come out:

These potatoes were more than delightful. The spice of the harissa gave them a nice kick. Talk about flavor! As you will come to see, this is certainly not a place where we will be screaming Season It Already!

And why was I worried about these plates being too “small” for dear hubby? With the four plates of tapas we ordered, we couldn’t even finish these, despite how good they were!

You may not know this yet from my blog, but I have a not-so-secret love affair with scallops. I was introduced to them later in life {read: after college} and I almost always order them anytime they are offered {read: when not served with bacon}.

Despite the fact that tapas are plates meant to share, Rob knew that I would need to order the scallops. {He approves of the love affair.} But he also knew we’d be ordering other meat items for his culinary pleasure. 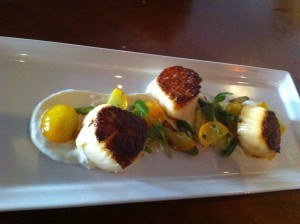 These scallops are different from those on the current menu. I imagine that the flavors change with the season. And while the flavors of these scallops are indescribable {the bartender and server went into intricate detail on how they were prepared!}, let’s just say that I was fully satisfied and smiling ear-to-ear. My plate was cleaned. 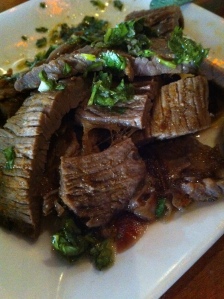 While Rob said that the meat was just a bit chewy, it didn’t stop him from eating it! And flavor? How could there not be with a fresh chimichurri sauce covering it? 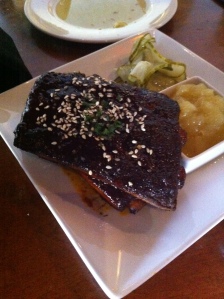 For being an American girl constantly in search of flavor, you may be surprised to learn that I don’t particularly like ribs nor barbecue sauces. {Gasp!} There is something about the smoky and sweet flavors that everyone loves that I’m just not into so much. That being said, I gave these pork ribs a try and was pleasantly surprised. Rob licked his fingers clean.

And you can’t stop in Spain without having a little Sherry, right? 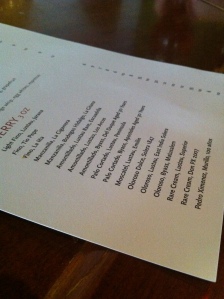 Being the girl that cannot make a decision, knows nothing about sherry, and is still in search of her inner Frasier Crane, I finally just had the bartender choose one for us: 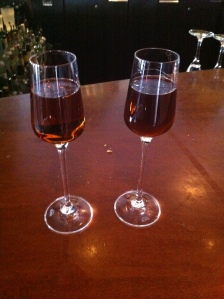 The perfect end to a meal! I sometimes taste Bit-O-Honey when I drink Sherry or other sweet Spanish wines. Is this just  me?

What are your favorite small plates to eat, make or order?