It’s been a while since I’ve written up in here.

It’s been quite a month. Since my last post about my birthday weekend, it’s been a whirlwind!

Not only did we win that Monday night Packer game I spoke about, but we had a ton of fun. Here’s how:

Start at Townline for some lunch and a drink. It was Double Bubble – aka Happy Hour. 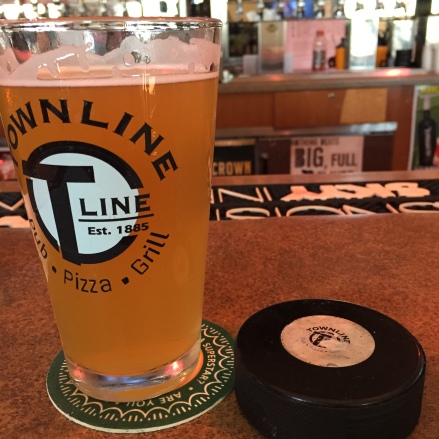 We had plans to meet up with a ton of people; but it didn’t happen, which made me sad. Things get crazy after you’ve had a little Crown Royal Apple pre-game…

{Note: The Crown Royale Apple bag is green and gold!}

You start to lose track of time.

Then you find a new brewery. The opening hours didn’t work for us the last time were in the area. But this time we couldn’t miss Badger State Brewing Company because it was highly recommended by my brother. 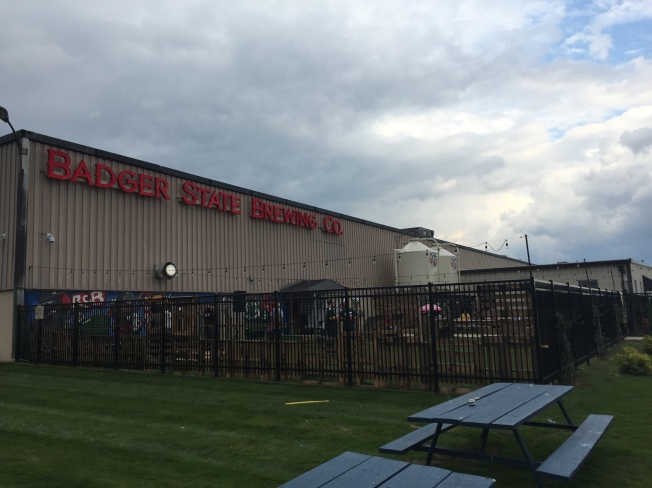 The patio area of Badger State Brewing Company is huge; but it really needs to be for game day because it’s just across the road from Lambeau Field.

You’ll find Badger State’s beers on the chalkboard on the right and other Wisconsin draft brews on the left. There are so many choices! 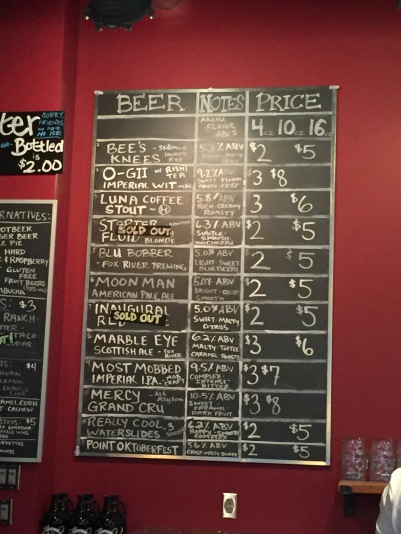 But we saw this… 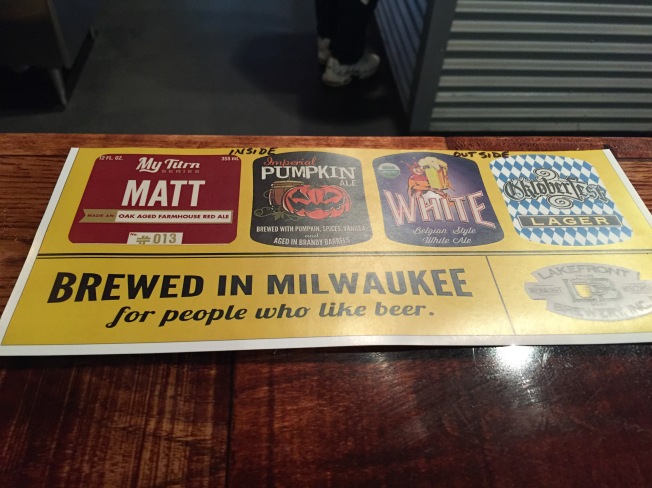 I thought I should try Lakefront Brewery’s Imperial Pumpkin Ale. I am not normally a huge fan of pumpkin beers, with the exception for Pumking. That may be why – nothing lives up to it. So I asked the bartender about it.  I’m completely paraphrasing here…

Beertender: Most pumpkin beers aren’t that good. But this one is exceptional.

Me: I know. I don’t really like them in general, but my go-to is Pumking.

Beertender: Yes, Pumking is top notch. But this one is something special.

Then I read that it was aged in brandy barrels. I had to have it.

I was not disappointed!

We weren’t hungry, but I think next time Rob will fancy himself some of these:

Then you meet some really cool opposing team fans and buy them drinks.

Then you hang out for a while while listening to a cool bluegrass band! Seriously, it’s fun to meet opposing team fans. I’m in the camp that we wouldn’t have football if we didn’t have opposing teams. So let’s hang out… and then may the best team win. 😉

Then, would you believe that I went to the following away game? How did this happen?

We haven’t gone on an annual international trip this year and I was feeling pretty sad about that. However, we were able to coordinate a trip to visit a friend in sunny California with our friend Jenny. (More on that trip, soon!)

And we ended up at Levi Stadium to watch our Pack play the 49ers!

Well, we just had to check out the stadium hosting the Super Bowl if we plan to be going to there this year, right?!

Rob wasn’t as much of fan of the stadium as I was. Remember we were in San Francisco – wine country – so there is wine!

And I’m not talking box nor tap wine here, but by the glass – out of a bottle! Yes, it’s expensive – it’s a stadium; but I liked the selection.

And how could I not get a Salumi and Cheese Platter as my stadium lunch/snack! {Right, Biz?!} All with a little bubbly? This kiosk was so close to our seats, too. Win-Wine! {See what I did there?}

Still, something interesting that I noticed at Levi Stadium that I haven’t at Lambeau is that people were having food and drink orders delivered to their seats! They can right from their app!

I liked that idea! There’s a $5 delivery fee; but if you are really into the game or don’t want to fight the crowds, it might be worth it. And guess what?

Then, this weekend, we celebrated the wedding of some wonderful friends. I loved the idea of guests signing corks!

We didn’t know anyone else there… but decided to get a hotel room and just have a nice night out for just the two of us. Not only was the wedding beautiful, but we met some wonderful people! And since it was at The Medina, we had a bit of time to go bowling.

Yes, we did! I did not have the outfit to bowl; but Rob bought me some brand new bowling socks from the vending machine and we were good to go.

We ended the night in the hot tub. It was the perfect 24 hour vacation. It’s not that we needed the vacation. (See above!) But it was a great opportunity to spend some time out alone – well, sort of!

And then, this past weekend, we had another Packer win. This has been an exciting year for football! We are 5 and 0. It’s still early; but exciting nonetheless.

So why haven’t I titled this post The Packers, rather than The Football? Because Rob’s alma mater – the University of Michigan – has been rockin’ it, too.

They hired Jim Harbaugh to turn the team around. Everyone thought in a few years, he could move things in the right direction. However, no one would have anticipated he could do it this year, without his own personal recruits! It’s still early there, too; but 4 and 1 is pretty darn good when it’s not expected. Oh, and did I mention the last three were shut-outs?!!!

My husband is very happy.

And that makes football season even more enjoyable for me!

But this whirlwind month has not ended! We still have a really quick trip to Chicago planned to meet up with our Aussie Mum & Dad. Anyone know of a Packer bar there? We might have to watch a game!

Now picture all of this craziness and coming back to work each week, trying to catch up… But most importantly, we couldn’t do all of these little bursts of travel without our dog sitters this year. Thank you Jen, Sally and Ryan. We are forever grateful!

Do you love football season?

What is your favorite team?

Do you have any traditions that make football season special to you?