I’m putting together a grocery list of items I need to buy to have on hand after my surgery. They are warning me that the pain killers are going to have some side effects, in which plenty of fruits and vegetables should help do the trick. 😉 Also, since my husband does not cook, I want to have some easy, fast – meaning 5 minutes or less! – healthy go-to meals and snacks so he doesn’t bring me take-out every night. {Although it’ll be nice a couple of times!} I may be off of work for up to two weeks; but even if I’m not, I want some easy things to grab so that I don’t make any poor choices out of inconvenience. Planning ahead and taking out the guesswork, ya know?

I do know that I could do a few make-ahead meals, but with the pain I’ve been in, it just sounds exhausting at the end of the day. Even after sitting all day, my legs feel like they can’t take any more. I have been cooking a bit, but not enough to put that much effort into it.

Here is my list of meal and snack ideas and the corresponding list of groceries that I will need to shop for since they are not currently in my pantry:

That should be it! This also serves as a reminder if I find myself thinking that there is nothing to eat in the house. I can come back to this past to read about my available options!

But of course, Rob, I won’t mind a little takeout now and then, or even a little ice cream. 😉 I’m just trying not to go overboard while I’m immobile!

I was running late, so I made a 90-second Breakfast Sandwich to take in the car (not pictured because, uh, I was running late). But if you want to see a photo or learn how I heard about these, click here. Approximately 300 calories with blueberry bagel thin (sweet and savory sandwich!), one egg, and one ounce cheddar cheese.

At work – 2 cups of black coffee with a piece of Dove Dark Chocolate (the one with almonds). Isn’t this message appropriate right about now?

I put the avocado in the container the night before and squeezed a bit a lime juice over it, but it still browned. It tasted fine, though. And that little jar is leftover from a Love with Food sample. Guess what I put in it? Leftover Balsamic Glaze from my Avocado-Bruschetta-Mozzarella Chicken dinner. I used it as my salad dressing! 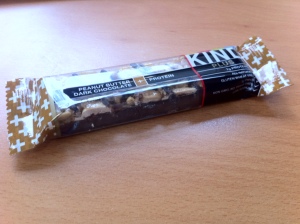 Last night, I went to a Saga Hill Cooking Class with some friends. Knowing that we probably wouldn’t eat until later, I snacked again after work. I had an apple with some Biscoff Spread. Then I went to a small wedge of double cream brie. It could have turned into an all-out binge, but I stopped myself and called my mom instead.

When we arrived at cooking class, we poured ourselves some wine. I started with a glass of white, but it was too warm, so I switched to red. For $15, wine is unlimited for the evening. My friend Jen was driving and I could no longer be on meds before surgery, so I took full advantage! Actually, I was a little apprehensive on how I would hold out for the evening. By this time of night, I’m usually just wiped. Luckily, from where I was sitting at our table, I could sit on the stool or stand up whenever I needed to.

I lost count of my wine, but I think we concluded that I had five of their bar-sized glasses. This is equivalent to probably 2 and 1/2 to 3 glasses the size that I would have at home.

In the past three classes I’ve done at Saga Hill, we usually don’t eat until she’s done her explanation of what to expect and have cooked our first item. However, this time she served us little dishes of jambalaya right away!

This class was All About The Pig. I thought this would be a good one to give me some ideas and what else I could make for Rob. We learned about pre-packaged bacon versus pork belly. We cut the pork belly into lardons and sautéed them in a little oil. We then learned how to make scrambled eggs the correct way! You should not beat the crap out of them, but should be patient and guide them to ebb and flow in the pan. We finished the eggs with some chives and butter and served them with the bacon and toast:

Scrambled eggs with lardons and toast

I don’t know if I can ever eat packaged bacon again! Next up, we made our own sausage. Chef Marianne taught us that sausage is made of one-half pork belly and one-half the middle section of the pig (the loin). We each got some raw ground pork and were able to make our own sausage in a way that could easily be replicated at home. We were given ingredients such as thyme, fennel, cayenne, nutmeg, maple syrup, chedder, etc. and were told to be creative. My sausage included fennel, cheddar {like I would have done anything else!}, with a pinch of cayenne, and some salt and pepper. We rolled them in plastic wrap and poached them for four minutes in boiling water. While that was going on, we were served some pork carnitas on a small baked corn tortilla. (Not pictured, the wine must have kicked in at this point.) The carnitas had a great warmth of spice and were uber-flavorful. They were topped with some sour cream and cilantro.

After our sausages were poached, we browned them in a little bit of oil: 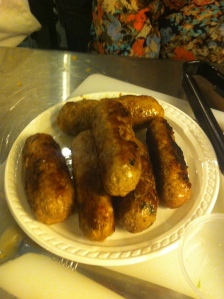 Since there were six of us at our table, we cut each sausage into six pieces to try a little bit of each creation! Here is what my plate looked like:

To be honest – I loved all of them! Each sausage had a very distinct, unique flavor! And each time we tasted one, we could figure out who made it. It was a fun guessing game and a test of our taste buds.

Then we finished off with dessert – which had nothing to do with pork. We learned how to section/supreme citrus. We put Lynn at our table to work and they turned out beautifully!

One of the chefs gave her the wonderful compliment that in all of his years as a chef, he’s never seen in any kitchen a more beautifully sectioned/supremed selection of citrus!

We each had to make and flip our own crêpe. For some reason, this was a challenge for me. I could get it out of the pan, but not flipped over. One of mine landed on the floor. I guess I just don’t have that flick of the wrist! The citrus {lemon, clementine and grapefruit} ended up in the pan with some sugar and after reducing, some brandy was added to flambée the mixture. We topped our crêpes with the sweetened and flambéed citrus, folded them up and sprinkled with powdered sugar.

Overall, it wasn’t a low-calorie day. However, I’m glad that our portion sizes were small enough at the cooking class that we didn’t get overly stuffed. And it was still enough to feel like you’d had a good meal!

When I got home, I started to eat a double cheeseburger because Rob had brought home an extra and I didn’t want it to go to waste. WHAT?! What kind of thinking is that? I had already had plenty of food. Lesson learned. I have to eliminate that kind of thinking.

What easy, fast, healthy ingredients, snacks and meals would you add to my post-op lists above?