Sure, you can usually find a $20 – $25 {or even less} bottle of wine at a local restaurant that really isn’t known for wine. These sorts of places have wine on hand only for the occasional request, but wine generally isn’t their focus. Furthermore, the wine isn’t of high quality and it is quite often just cheap – meaning probably around $7 retail.

Wine markup is high in most restaurants though – between 100% and 200% per bottle. And oftentimes, it’s much more per glass. You may even find that the most expensive wines on the menu have the least amount of markup. We’ve found that restaurant wines in the $40 – $45 range are usually pretty decent. However, when we can afford it, wines in the $50 – $60 range are worth the splurge. Still, it’s tough to justify paying that for one bottle of wine. That’s when it’s best to take advantage of half-priced bottle of wine nights!

But what if you could find a high quality wine in a restaurant at an affordable price?

Well, if you live in the Twin Cities metro area, you can! Just head yourself down to Historic Main Street Minneapolis to Vic’s Dining, a restaurant overlooking the Mississippi River.

The cobblestone streets of St. Anthony Main offer riverfront dining from a selection of restaurants. My friend Jen and I popped into one for some gelato when walking in the area a couple of summers ago. And Pracna was on her list of restaurants to try when it was her turn to pick where to dine one month. But another restaurant won out.

And as per the usual, it took us a Groupon to get our butts down there!

We made reservations, but there were very few people when we arrived. We took seats at the bar and asked for a wine menu. We had already perused it online, but knew that it changed often. The Vic’s Dining website advertises a “fabulous 99 bottle wine menu where all bottles are priced dangerously lower then anywhere around town”. I completely agree with this statement! Check out the wine menu the night we dined there: 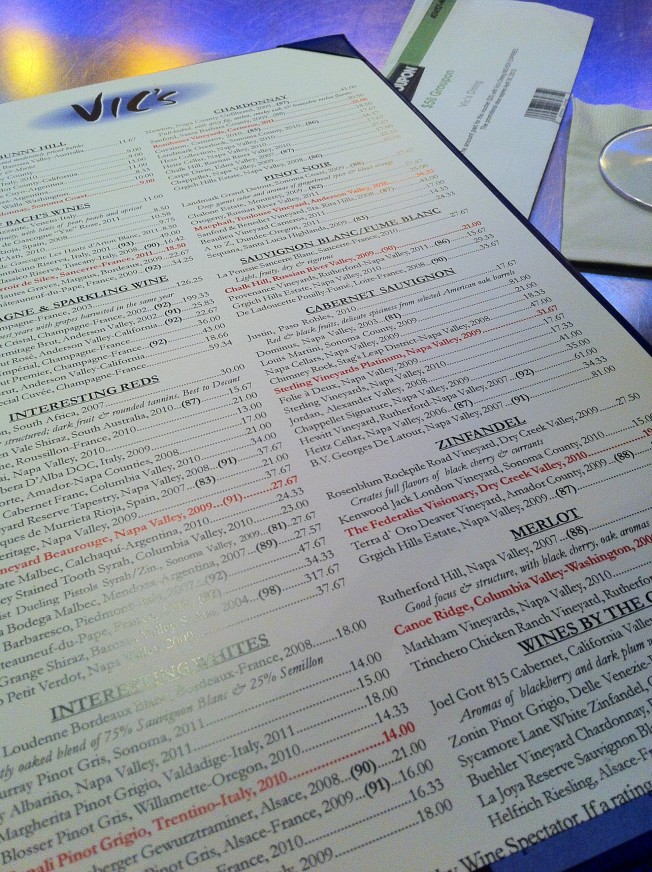 Have you seen such prices for 90 and 91 point wines or those from specific appelations?! These prices are insane! It almost made me feel a little bit guilty using a Groupon. Now the trouble was choosing a bottle. I had no idea what I was going to eat and there were so many unique wines that caught my eye. I don’t like going with well-known wines when I order off of a wine menu. Variety is the spice of life, so why not try some new wines? We did find a bottle that the two of us could agree on and it wasn’t one I’d had before: 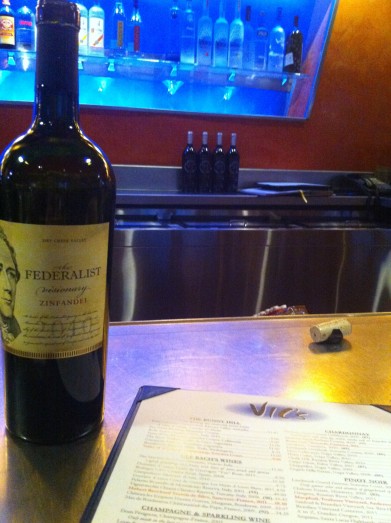 We love a big, bold spicy Zin. {For those of you who are still drinking White Zin, this is nothing like it. I’ll post about the difference on a future Wine Wednesday!} I find that it’s hard to find a good one that isn’t overpowered by vanilla these days. You usually have to pay a bit more for a good quality one. And we found an excellent one here for just $19 – at a restaurant!

What I’m about to tell you next reminds me of an episode of Frasier. Do you remember the episode where Niles realizes that he never rebelled as a teenager? When he thinks he’s eaten a pot brownie and decides now is the time he’s going to rebel he exclaims: “I’m thinking of pairing this Chilean Sea bass with an aggressive Zinfandel!”

Haha. Yes, while I’ll always stand by my mantra that you should pair any wine with whatever food YOU like it with; generally big, bold red wines don’t go with seafood. And that’s just what I ordered! 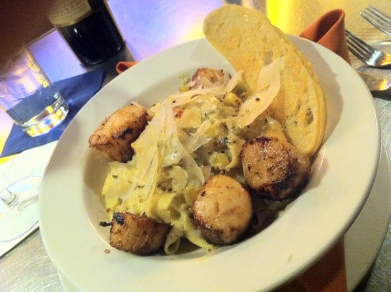 Doesn’t that dish just scream my name? I adore scallops and one of the best scallop dishes I ever had was one with a pesto sauce at a Minneapolis restaurant that has since closed. I hadn’t been able to find anything like it since, so there was no way I was going to pass this dish up, even if it meant pairing it with an aggressive Zinfandel!

It didn’t disappoint. However, after a while the dish became a little too heavy. Maybe it was just the sheer amount of food, or the fact that I’m getting used to eating normal-sized portions? In any case, it was worth ordering it.

Rob, the burger guru, really wanted to give theirs a try. It’s also a more appropriate pairing with an aggressive Zinfandel! 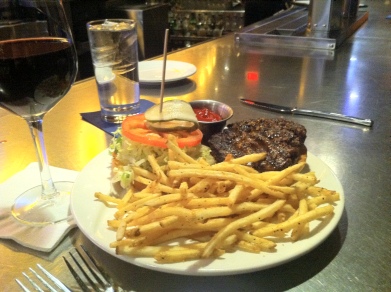 Guru Verdict? It was okay – just an average burger with average fries. It won’t make the Top 10 Twin Cities Burgers or Fries list, nor will he order it again. But this isn’t really a burger joint, anyway.

There are so many places to discover along the St. Anthony Main Mississippi riverfront {we did stop for an aperitif and a digestif at two of them!}, that we’d come to Vic’s for a bottle of wine and an appetizer next time. It definitely wins my vote for best-priced quality wines in the Twin Cities!

What’s the best wine you’ve ever had in a restaurant (regardless of price)?

We had been meaning to get to Spice for ages. But it took us a Groupon with an expiration date to actually get us there. It’s not very far from us, but it’s not very convenient either. It’s not a place where we’d just stop because it’s kind of out of the way. There would have to be a specific occasion or reason to go there. In fact, many other restaurants have failed in its location.

Now I’ve been meaning to post about Spice for ages because, when I check my calendar, it looks like that first visit was in back in August!

Spice is a Thai restaurant, a cuisine I’ve found that whatever you order, you pretty much can never go wrong. We arrived and ordered our beverages. I was surprised that there was no Riesling on the wine menu. There were mostly dry whites. A sweet white wine is preferred with spicy Thai and other ethnic foods because the sweetness counteracts the spice. The wine glasses were small without correct pours, but I wasn’t expecting them to be. At Thai restaurants, my only expectation is a low-end, but enjoyable, quaffing wine. 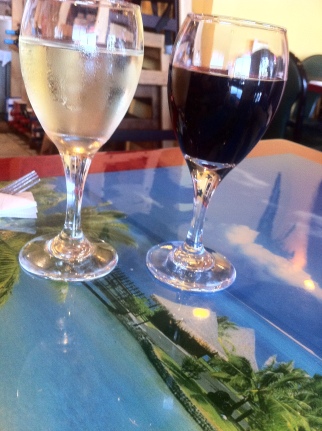 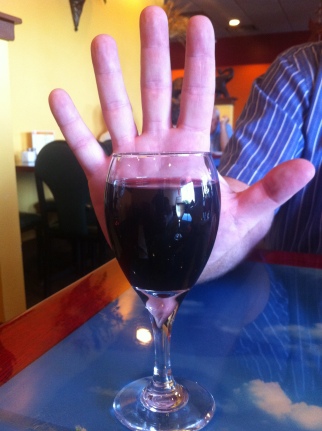 We asked for recommendations on the menu, too. I really wanted to try something other than my usual Thai standybs of Green Curry and Pad Thai. Our server recommended the Basil Noodle, Pad Thai and the Curries.

Go figure. Rob had been eyeing the Basil Noodle and already knew he was going to get it. In fact, he usually orders some sort of noodle dish with basil when he eats Thai food. Maybe those are safe recommendations when you don’t really know what your customers like.

While waiting for our dinners, I noticed this: 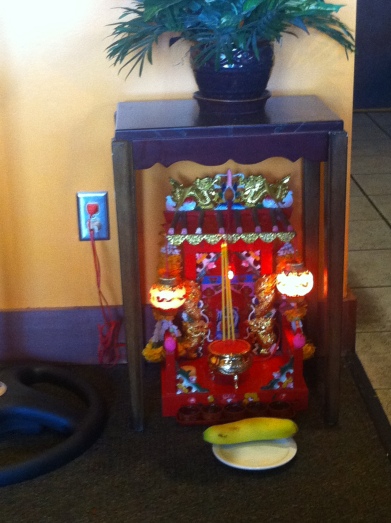 Can you explain this to me?

It’s some sort of shrine setup, but there is a plate with a banana in front of it. I really know very little about Thai culture, so I’m quite curious what this is all about. If you know, please do share!

It was a Monday after work and I had just run four miles because I was training for my first ever 5-mile race in October. I had only run four miles a couple of times, so I wasn’t feeling all that great. I was a bit nauseous and not exactly in the mind frame to think nor even to eat anything spicy. However, I knew whatever I didn’t eat could come home with me and would reheat well. So I didn’t step outside the box. 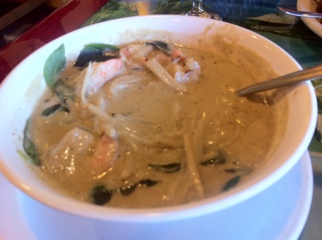 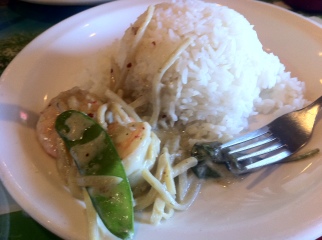 This restaurant’s spice levels range from 1 to 5:

So our thoughts on this place? We loved it! Rob has gone back (out of his way) to get take out several times since! I know some people aren’t fond of Groupons because they feel that they take advantage of the company and can cause them to lose money. While that could quite possibly happen, it’s really just another way to spend advertising dollars. And this is one instance that proves that the Groupon got a customer into their restaurant and brought them back again and again!

What is your favorite Thai dish and why?