It’s supposed to be 60-degree weather this week here in Minnesota. YAY! It’ll make for great outdoor running weather. And with that I want to send my well wishes to all of the Boston Marathoners today. I know it’s going to be an emotional run. Cheers to all of you participating!

Last week, I made this Beer and Beef Risotto. It was only my second time making risotto; but I think it turned out pretty well. It seemed to consist of more beef than risotto. But I think I prefer that. 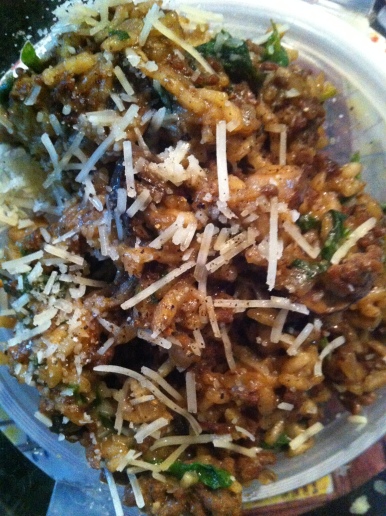 The only changes I made were that I used an amber beer instead of a wheat, beef broth instead of chicken {you know, that whole fins and feathers thing}, two cups of baby portabellos instead of one and three cups of chopped spinach instead of four. Oh, and I added a sprinkling of shredded parm on top because, I mean, who doesn’t like that? I think the beef broth may have given it some added depth. It made four servings clocking in at about 610 calories each. The portion sizes were generous. It could definitely serve six.

When portion sizes are generous, break ’em up into more portions.

Speaking of generous portion sizes, we tried our second round of Plated this past week because we had two free plates coming. Get your two free plates here. For my full review of Plated, click here.

I was really surprised when my husband agreed to a meatless meal. When he gave the approval, I jumped on it! We had our first polenta in Italy and fell in love with it. This was my first attempt at making it.

Before making this dish, while I was amidst my Couch to 5k run that night, I wondered what would happen if a Plated customer was missing an ingredient. I mean, because warehouses make mistakes all the time, right? We’ve all had missing items from online orders. Missing an ingredient could make or break a dish! And what if you had no backup plan?

After I began chopping and separating the veggies, I noticed that there were no carrots for me to chop. How could this be that I the night I thought about it, I’d be missing an ingredient?! 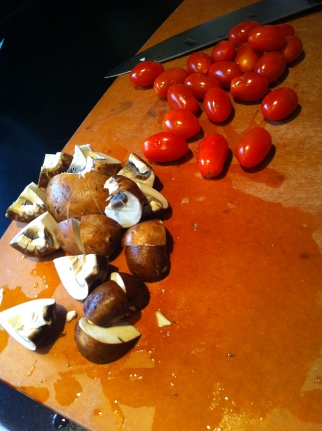 I finally accepted that our roasted vegetables would be sans carrots; but it was not a make or break ingredient. So I began unwrapping the other items. DOH! The carrots were in the same bag as the asparagus, just hiding on me. So it ended up that we weren’t missing any ingredients. In fact, we were plus one shallot!

My trouble making this dish was that my polenta wasn’t turning smooth and creamy, like the recipe card stated. Instead, it was a sticky, massive clump. I am wondering if I should have measured the polenta. Maybe I shouldn’t have made the assumption that what was in the bag was what I needed. My solution was to add more water throughout.

I should have used a bigger dish for this massive amount of polenta and roasted vegetables. How could this serve just two people?! 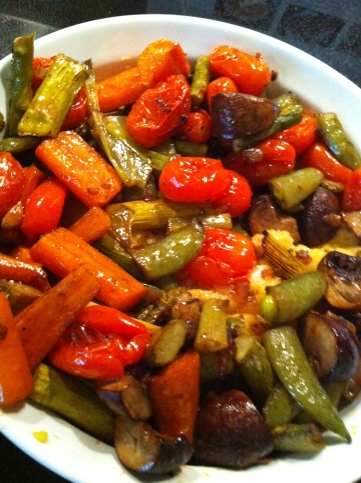 I don’t know if adding more water to the polenta to smooth it out increased the size/amount of polenta that was yielded; but even when I put it on the plate, it looked like so much food! I even left some polenta in the dish and just scraped out all of the roasted veggies.

Rob thought the polenta tasted more like grits. The flavor was fine, but neither of us ate all of it. It was just too much. But we did gobble up the veggies. If there is any one thing we’ve learned from Plated, it’s that we do love roasted veggies! This blend of carrots, peapods, cremini mushrooms, grape tomatoes, green onions and asparagus was the perfect mix for me, tossed in a vinaigrette and roasted for 15 minutes on 450. We will be having those again!

This dish could have made three or four servings, with the amount of polenta I made.

When we received the ingredients for this dish, I couldn’t believe the amount of vermicelli that arrived for just two people. I didn’t understand. Did it shrink when cooked?  I don’t think I’ve ever made this style of rice noodle before.

But I was right, there was waaaaayyy too much vermicelli. Enough for at least four people. I dished up huge portions on our plates and still had this leftover:

No worries. I put it into a container and plan to add some peanut sauce and some sort of protein to it this week. But it still left a lot on our plates.

Rob was disappointed because in his mind, the sauce wasn’t really a sauce. I knew it was going to be a runnier sauce, of which he is not a fan.

But that wasn’t the issue. It was the fact that you could barely taste the sauce because it didn’t cover the mound of vermicelli on the plate. All of that being said, the pork was so tender, juicy and just perfectly seasoned. I must say that Plated really knows how to do a pork marinade. That’s 2 for 2 for us!

So in sum, here’s what we learned this week:

I wouldn’t count on getting three or four portion sizes every time you order two plates, though. Instead, think of it as a bonus and just be mindful when plating.

And now, for this week!

*Another Plated week for us! Get your first two plates free (minimum order of four plates) by clicking my referral link here! To read my Plated review, click here.

I wanted to share a Yoga Downloads deal I got the other day: Just $18. Yes, you can find lots of free yoga apps online. I just need a real routine and to start from the beginning to go back to where I was pre-back surgery. Plus there is a lotincluded. I think it’s going to be #worthit. Trying it out this week!