Our Girls’ Dinner Night Out restaurant was my choice in March. We have no set rules for DNO; however, I always try to pick something new-to-me and something Rob would probably not enjoy.

I chose World Street Kitchen because it gets so much recognition in the Twin Cities that I had to know, “What’s the hype?” Sure, Rob might enjoy the food here. But this food-truck-turned-fast-casual restaurant is far from his ideal setting to dine.

It was the perfect choice for GDNO.

I began my usual online search as to what the best choices were… The verdict? Sources told me that I needed to get a Bangkok Burrito or Yum Yum Rice Bowl. While they both sounded tasty, I had the impression that the BB was huge. Plus, I’m obsessed with bowls as of late. Then I had to narrow my Yum Yum Bowl down even further. I ultimately chose: 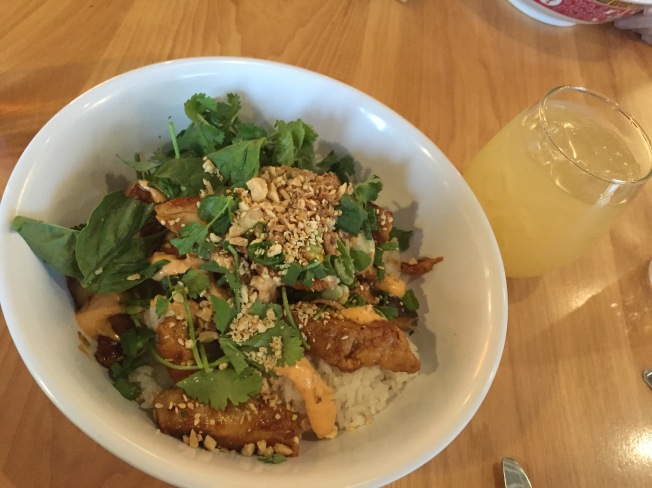 And it wasn’t until the girls made their way to the table that I secured for us after ordering that I realized that they ordered the exact same thing!

I would get this bowl again. I loved the “crunchies” which I think could have been fried shallots. The sauce had a nice little kick and I loved the fresh herbs. But the egg was a little under-cooked to my liking. I like a soft-cooked egg, but the white was very underdone. I guess I could ask for it cooked a little longer next time? I’m not sure the girls liked this dish as much as I did. Kim certainly picked around the cilantro, but that’s because she is not a huge cilantro fan. {So be sure to ask them to omit if that is the case for you.}

The glass on the side there is the White Sangria {white wine, pineapple, elderflower – $7} that Jen ordered. It was actually a dry sangria and I detected a hint of cumin! I do like the use of different and worldly flavors at World Street Kitchen. 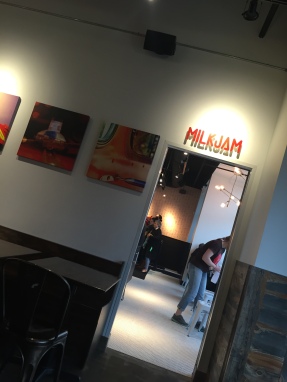 But that Yum Yum Bowl filled each of us up and we went for coffee at The Beat Coffeehouse instead. Take a look at my pretty cortado: 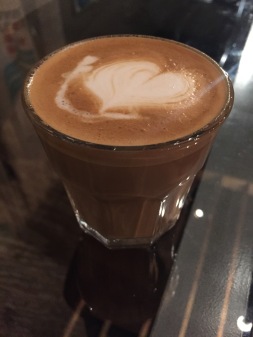 A cortado is a beverage that consists of an espresso cut with a small amount of warm milk. The word cortado is the past participle of the Spanish verb cortar, in the sense of “dilute”.

I often talk about craft breweries on this blog, but what about independent and/or craft coffee shops? We have a ton of these around the Twin Cities! The girls and I like to try new ones on GDNO like Royal Grounds Coffee and Spyhouse. The Beat definitely fit that bill. When Kim finished her Vanilla Latte, she had remnants of vanilla bean on the side of her cup. Yes, the fresh stuff. No pumps here. And now… I want to try all of these.

Yes, I’d love to return to World Street Kitchen. Maybe I could convince Rob to join me there for a weekend lunch? Maybe after a walk around Lake of the Isles?

Have you eaten at World Street Kitchen?

If so, what’s your favorite thing to order?

If not, what would you order from this menu?