I hope you all had a wonderful Memorial Day weekend!

But today is this week’s Monday and it’s back to the grind. So let’s just jump right into another Restaurant Impression, shall we?

It was just by chance that we found Prima.

It was a Friday night and I was hangry. Work was busy, so I hadn’t eaten a proper lunch. The night before, my friend Kim asked what we had planned for the evening. Rob and I actually had nothing going on, which is rare. So I asked her to join us because I was sure we’d be playing some Restaurant Volley before going out.

Without going into too much detail, let’s suffice to say that:

So we continued to drive along Lyndale Avenue in search of somewhere else to meet Kim.

I pulled out my trusty Google Maps app. I love how the GPS can detect where you are, then displays the businesses and landmarks around you. I scrolled along Lyndale Ave and found George and the Dragon.

But traffic was bad. We were at a stand still. There was road rage… not in our car, but in the one in front of us. The battery was low on my phone and I still needed to text Kim our location.

Then I spotted another restaurant that would be coming up on our right in just a few blocks:

Okay, I took this photo the other day, not when we were in en route. So neither the 18-minute drive time nor the 1:15pm timestamp is accurate; but I’m sure you get the picture.

I noticed that Prima had an average rating of 4.6 stars, so I clicked on it. 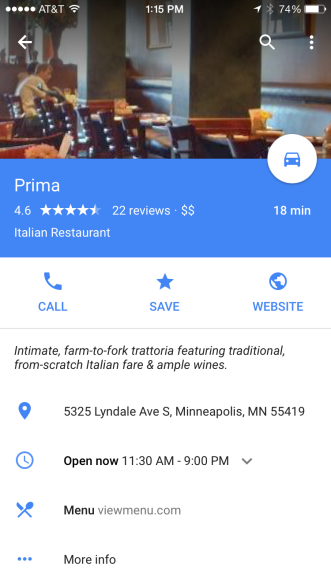 There didn’t seem to be a real bar area; but we chose to eat inside rather than on the sidewalk facing the busy traffic.

While we waited for Kim, we perused the menu and ordered a drink. I spotted something really intriguing to me! Can you pick out what it was? 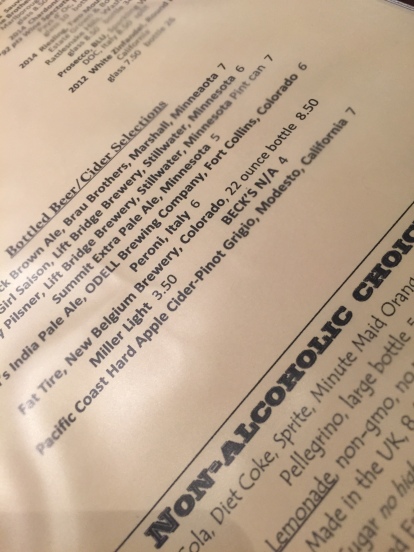 It was something I’d never had nor envisioned having. The server said it was brand new, so they weren’t even sure in what type of glass the Hard Cider with Pinot Grigio should be served!

It was crisp, dry and refreshing. There wasn’t even a hint of sweetness that came to the party here. Hard apple cider and pinot grigio wine is quite an interesting combination; but it seemed to work.

I didn’t order it, but I was also curious about the Elderflower Lemonade! 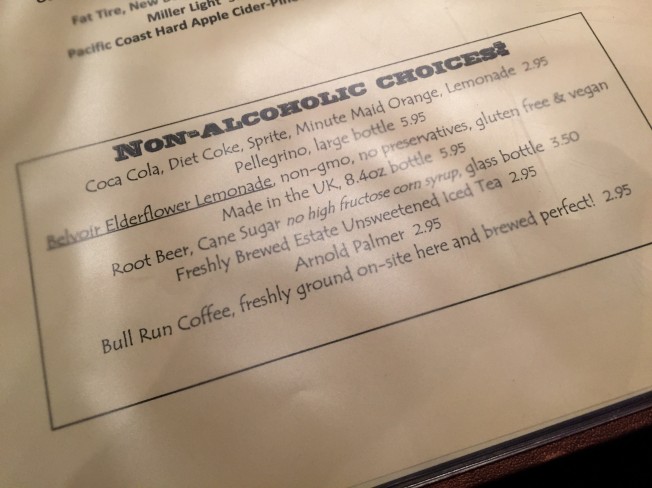 And here is something very important that I’d like to point out about Prima:

You are going to laugh when I tell you what I was craving… goat cheese! I looked high and low on the menu and found nothing of the sort, so I had to choose something different. After running a couple of choices past our server, I settled on:

I just had to get the chicken after reading the notes about their farm. The chicken was juicy and seasoned perfectly. The pasta was a lot more flavorful than expected. I tasted a lot of garlic in there!

Kim went all out for the salmon, which was actually very reasonable priced.

Rob was in heaven with his pasta, which we both found to be cooked perfectly all dente. No mushy pasta here!

And with that, hangriness was cured. Thank you, Prima!

Do you ever use Google Maps or another app to decide on where to dine or what to do?