I’m learning ’bout my Cities by being a tourist here.

I had no idea that there were Indian burial mounds in St. Paul! 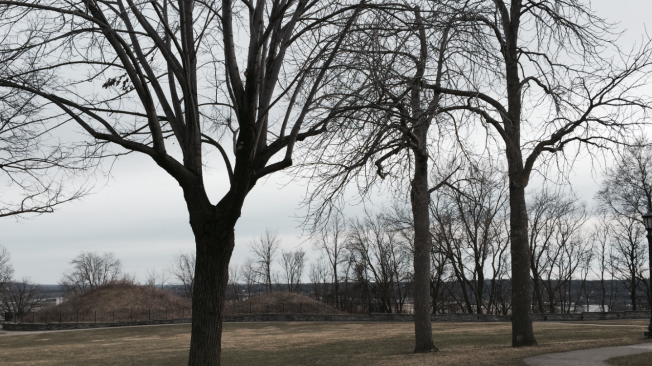 According to my Take a Hike: Minneapolis & St. Paul guide, there were once up to 37 of these Indian burial mounds, but only six remain. They also state:

Approximately 2000 years old, these mounds are believed to have been left by members of the Hopewell culture. The Native American tribe buried their dead with artifacts and ashes from their bodies. Later, during the 1600s, 1700s and early 1800s when the Dakota Indians occupied the area, the site was used to bury their dead wrapped by in animal skins.

If I came across these mounds and had not read any of the signage, I would have assumed these were just small hills in the park. Luckily, they are fenced off with signs indicating that climbing is prohibited.

I find this information fascinating. I’ve never really given thought to the peoples who lived here thousands of years ago. Instead, in my head, the history of Native Americans begins when the Europeans settled here. That’s pretty ignorant of me.

The burial mounds are located in Indian Mounds Park in St. Paul and is part of the larger Battle Creek Regional Park, right off of the aptly named Mounds Boulevard.

The park and its mounds sit along the limestone cliffs of the Mississippi River, views of which I imagine will be gorgeous in the summer.

It’s spring, but everything still looks like winter here in Minnesota. But the views of both downtown St. Paul (left), Minneapolis (in the distance) and the Capitol Building (right) are still extraordinary. 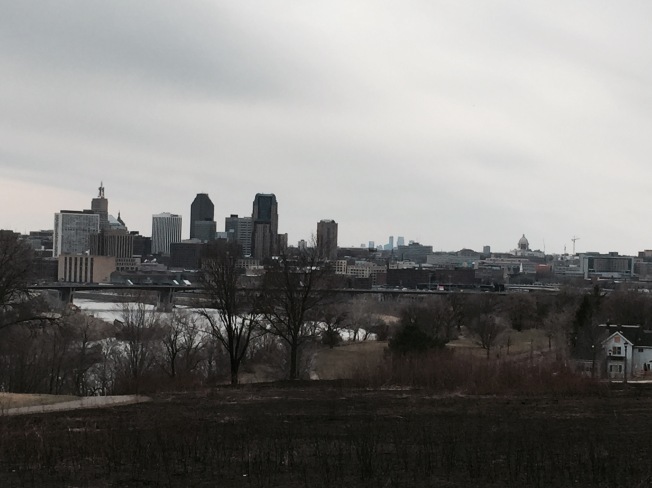 The walk from Take a Hike: Minneapolis & St. Paul is a short and easy one. However my other book – Walking Twin Cities – includes a longer, more strenuous walk. There are lots of hills along the bluffs!

We will have to come back here in summer or fall to do the longer walk and enjoy much more of the outdoors. Both books make notes of the wildlife to notice. And even on the blustery afternoon that we were there with friends, we spotted a bald eagle. Yes, this one goes down in the books for a future walk.

What have you learned about your city/town lately?