We had a little Staycation over Thanksgiving. All of the trips back to Green Bay for Packer games, allowed us our own Bye for the Turkey Holiday. I put up a Christmas tree for the first time in a few years and we cleaned out our basement storage. It felt good to declutter!

And despite that there was no turkey, I still feasted over that weekend. I had the opportunity to try a few new restaurants. {Well, before I came down with that cold.}

I will continue with my Australia trip report soon. It’s just that a couple of these restaurants are newer and deserve a little recognition, especially since I had trouble researching top dishes online.

My friend Lisa invited me to brunch. Neither of us could think of where we wanted to go. I was annoyed with myself because I’m always “noting to myself” that I should try such and such a place next time I do brunch. But do you think I can remember what those were?

Then, while I was thumbing through Mpls St. Paul magazine, I found this:

Hola Arepa started as a Food Truck! The focus was on Venezuelan sandwiches called arepas. The full-service Latin-inspired restaurant has been open since early 2014, with brunch available since mid-October. I’m not sure that I’ve ever had Venezuelan food before. I had to do a little research on what was best because everything on the menu looked so good!

I was able to find this article, which is what made me intrigued by the rum-spiked wild-rice horchata, called the Carlito’s Whey, instead of the Bloody Mary, for which I was more in the mood.

Hey. I liked it. I didn’t love it. I thought horchata was supposted to be more milky? It’s been a while since I’ve had that, though. Would I order it again? No. Lisa described it as an “alcoholic version of a a watered down chai latte.”

We arrived just before 10am on a Sunday morning, so that we would not have to wait. It’s a small place and by the time we finished eating, it was full. But the decor is bright and cheery, making the room seem very open and spacious.

I was debating what to order. I mean, I’m at a joint called Hola Arepa, whose namesake made their food truck so popular that they opened this brick and mortar location. So, I should really order an arepa, right? I had never had a sandwich with cornmeal griddle cakes serving as the bread. This was my chance.

But again, that article had me going back to the Tostada Chilaquiles. So when it was time to order, I enlisted the help of our server:

“I’m debating between the breakfast arepa and the chilaquiles.”

Without skipping a beat, she replied:

Her confidence in the dish without feeling the need to give an explanation was refreshing and is what made my decision!

And my mouth was happy. 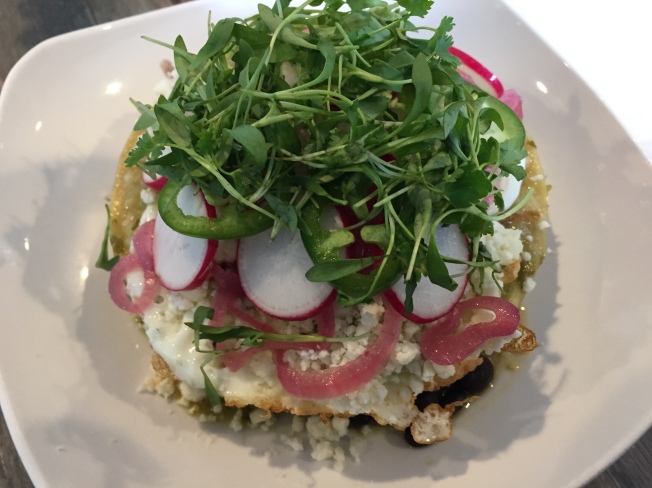 Don’t be alarmed by the amount of cilantro atop the dish. That photo is deceiving. There really wasn’t that much.

I absolutely loved this dish.

I ordered mine with pork which was as juicy and flavorful as I had read. I loved the crunch of the tortillas and the surprise of the runny yolk. All of the components were in perfect balance so that nothing seemed to overpower anything else. I did end up removing the couple slices of a jalapeno after one set my mouth on fire, though. I like jalapenos, but forget sometimes how much stronger they are when raw versus pickled. Speaking of pickling, I wasn’t too excited reading about pickled onions in the dish. But they worked!

Maybe this doesn’t look like a lot of food, but it was. I ate almost the whole thing and felt overstuffed by the time I got home. My taste buds were completely satisfied that it might be difficult to deviate from the chilaquiles when I go back…

All was not lost on the arepa home front, because Lisa ordered one.

All fillings are made from scratch and include naturally raised meats and organic veggies. Lisa wasn’t sure how she’d like the cornmeal since she isn’t a fan of corn tortillas. But she was pleasantly surprised! My bite of her sammie was a little bland, but that was after the flavor explosion I had from the chilaquiles. This may also be why she found the aioli verde slightly spicy, whereas I did not. The yuca fries could become addictive, though…

And this was one breakfast where we just had to have dessert! 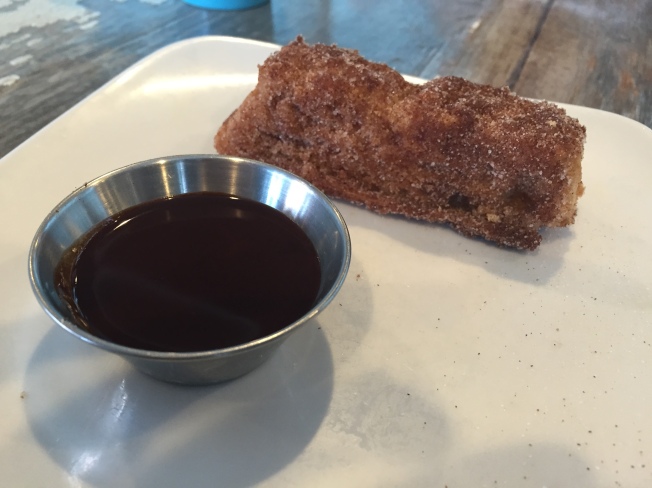 The churros were really hard and crunchy. I don’t remember them being that way, but it was probably in Spain in the year 2000 that I had one last. Crunchy or not, I didn’t love it and can skip it next time.

I’d go to Hola Arepa for breakfast any day. Just invite me! Although I will have trouble ordering anything other than the chilaquiles. But I will try a bloody with Peurto Rican sofrito next time. Or I could try something new at dinner.

Have you had Venezuelan food before?