When I woke up that Sunday morning in Chicago and asked Rob how he slept,  he said that he was in the bathroom every 15 minutes all night long. 😦

Please keep reading! I’m not going to go into detail on that!

He was still feeling absolutely miserable. In fact, he felt worse than the day before. I felt so bad for him. But, he felt bad for me because he knew I wanted to go out and explore. And it was our anniversary. So he gave me a gift: He told me to go out and enjoy Chicago on my own for the morning!

This way, I wouldn’t feel useless not being able to help him feel better and he wouldn’t feel guilty keeping me cooped up in the hotel. He could rest and sleep {and be very close to the toilet}.

Besides, it was a beautiful day!

Originally, because we knew the weather was going to be beautiful, we had planned to go to Oak Street Beach. Yes, there are beaches in downtown Chicago! {Ever heard of Lake Michigan?! HA!} And it’s beautiful! Just look at all this sand! 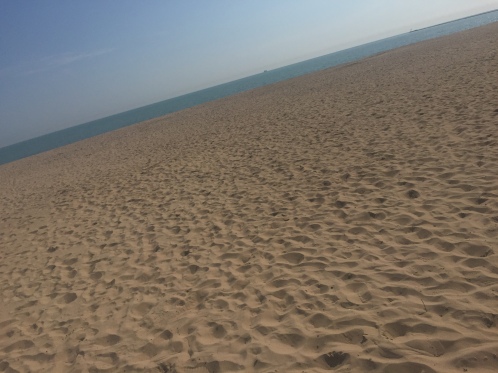 I took the walking/biking path along the beach…

I stopped only to check out the views of the city… 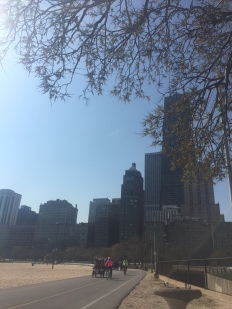 Just look at the color of that water…

And as usual, the Windy City delivered, but even windier off the lake!

I use several resources when making travel plans. Mostly the interwebs, but I did check out a few books from my beloved library and this one seemed to suit me most! 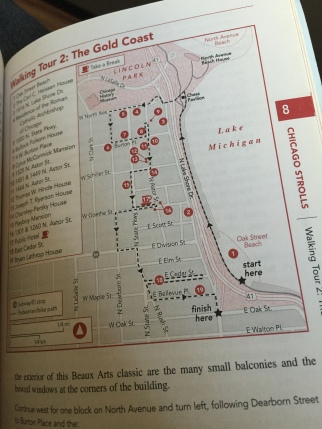 I loosely followed that Gold Coast walking tour, along Oak Street Beach and then through a quiet neighborhood with some old mansions! By lunchtime, I made my way to Allium, a restaurant on the seventh floor in the Four Seasons Hotel, where Kat from Tenaciously Yours said I could find one superb Chicago dog. 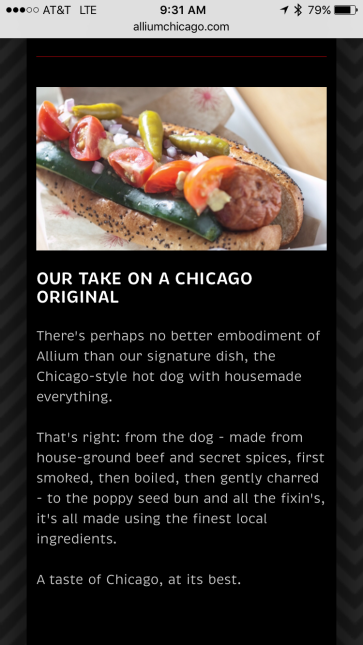 First, I must say that you should go to Allium just for the experience, even for just a drink at the bar. This place was absolutely beautiful! {Um, you are in the Four Seasons.} I *almost* felt out of place. I strolled up to the small bar where there was a couple and another gentleman seated. It was Sunday… So brunch…

I was worried that I’d be out of luck, but there were several menu items that sounded tasty! I wouldn’t have gone away hungry. 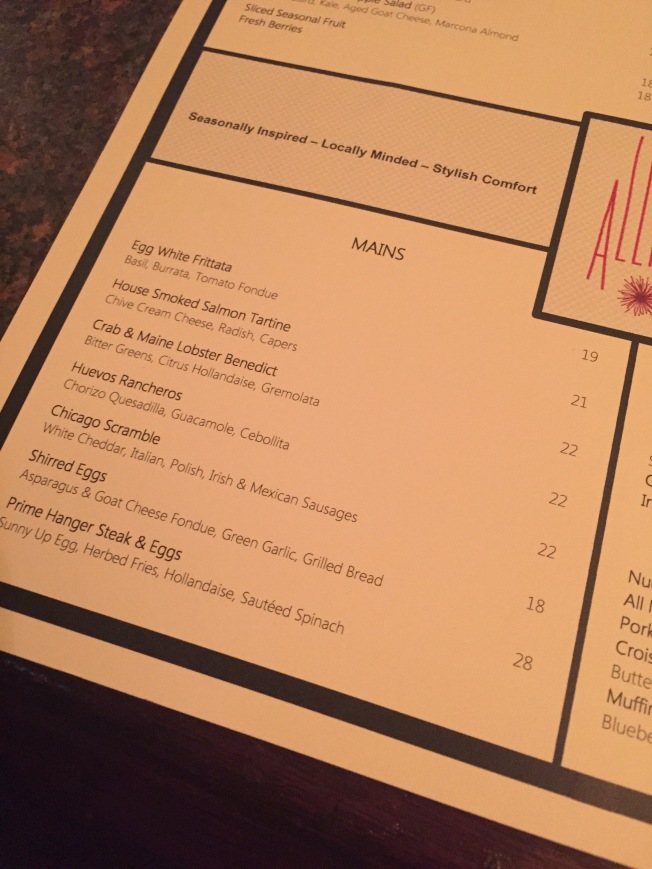 The Chicago Dog was not on this menu! So I asked the bartender, “I’m told you make a damn good Chicago Dog. Do you serve that all day?”

So I treated myself to one alongside a bloody mary.

I had no idea it came with fries! This was so much food! If Rob were with me, we could have easily split this and had food leftover. You’ll see all the homemade fixings come on the side, including homemade beer mustard, relish and balsamic ketchup. They were very kind to explain each condiment to me and then ask if I wanted traditional ketchup. Nope!

Here, I also learned how awkward I feel making small talk at a bar without Rob. So instead, I listened in to the conversation going on between the others, smiled and nodded where appropriate and answered a question or two.

The guy by himself at the bar casually mentioned in his conversation with the other couple that he was in town for business, working on a project called The Vampire Diaries. I don’t watch that show, so I thought nothing of it. {BTW, I wasn’t really eavesdropping. The bar was small and L-shaped, so I was facing the others.}

Later he talked about where he grew up and about traveling to Ireland – his last name is Malarkey. At one point, the couple asked him if he was an actor. “Yeah, I was in a series called Raw that only aired over there.”

This was all very casual. Okay, I obviously didn’t know who he was, so I had to IMDB him! This is who was sitting across the bar. He seemed like a nice guy. I feel like I know so much about him now, though. If you are a fan of The Vampire Diaries, let me know and I can fill you in on some not-so-important information. HA! Celebrity Sighting #1.

After lunch, I started to head back to the hotel because Rob said he was feeling better! It had been over an hour since he had been in the bathroom.

Side Note: For the record, these are the shoes I wore to walk all over Chicago. 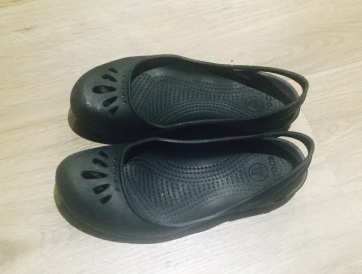 I never thought I’d be the one to wear this brand, but they are CROCS! I just love them because they are great walking shoes, are close enough to sandals if it gets warm {I wore them at Bondi Beach and in the water in Australia and just rinsed the sand off afterward.} And they are dressy enough to wear them out at night. I didn’t bring any other shoes with me that weekend.

I brought Rob back a couple of bottles of Gatorade. I wanted him to be well-hydrated before we left to explore other neighborhoods. I also made him eat a piece of my leftover pizza to see if his stomach could handle it. He passed with flying colors! {And I also got a nap out of the deal.}

Our first stop was Logan Square. Fresh off the “L” we found Longman & Eagle, one of the hipster cocktail bars I wanted to try.  Such a cool place! We had to wait just a few minutes for a seat at the bar; but we had a lot of fun deciphering the menus.

Can you determine which cocktail each of us ordered? 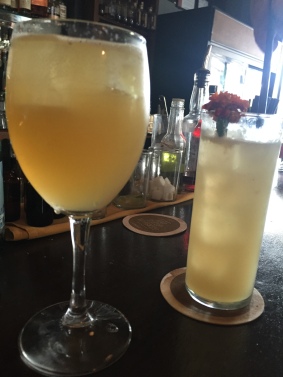 They were both fantastic. Then it was time to get some more food in Rob’s stomach. But, DOH! We were there during in-between hours! No food was being served. Rob was going to have to wait. There were a few other places in Logan Square that were on my checklist, but they were either a bit of hike from where we were, weren’t open quite yet or the menu did not appeal to one of us at a time. {For our future notes, that includes Fat Rice, Avec, Blackbird, Scofflaw & Billy Sunday.} #nexttime

Then we got back on the “L” toward River North. But first – Wicker Park. Our destination was The Violet Hour, a speakeasy I had read a lot about. But they didn’t open until 6pm.

So we stopped at Trencherman first. Such a cool bar that also was not serving any food…

We tried to order just a bit of bread when we found out they didn’t start serving food until 5pm. I think our bartender felt bad for us, because he went into the kitchen and was able to twist some arms, because this came out. 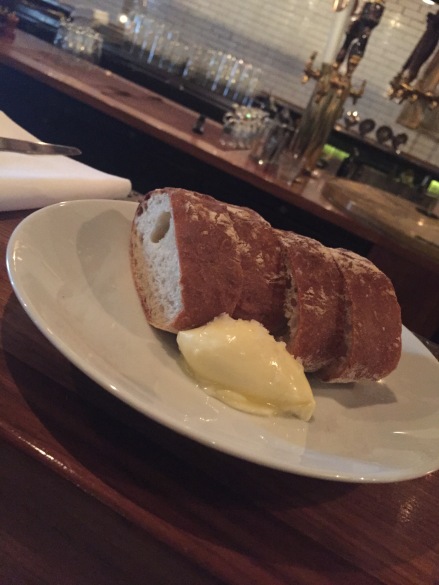 That warm ciabatta bread with salted butter was some of the best $3 I ever spent. It hit the spot and was enough to tide us over until some establishment served food.

We still had some time to kill afterward; this meant it was time for a pint at our Irish pub – our travel tradition!

Then, it was time to go in search of the Violet Hour, which was a little more tricky to find than I had imagined. But that’s the point, isn’t it? Let’s just say that we walked around the block a few times and finally inquired at an Urgent Care type building with the same address. Let’s just say that this mural is significant:

Why cows? I have no idea. And do you see the door there? Just open it and go right in!

Inside, you’ll be greeted by a woman who informed us of rules, if only because Rob was wearing a Michigan cap. {No hats!} I understand why. After the curtain was moved aside for our entrance, we stepped into a dark, candlelit, swanky bar. We requested a seat at the bar and they sat us at the end. Apparently, we were quite early and this place fills up. I was in love with Violet Hour.

You will see no photos of the inside or our drinks from me, if only  because I didn’t even want to take my phone out. I wanted to suck it all in. However, I learned later that they have a no cell phone policy, too. I love that. It’s like we were going back in time in this little hidden Speakeasy.

I had a boozy gin drink called a Puff Up {Dorothy Parker gin, carpano antica, cardamaro, grapefruit bitters}. That was my favorite cocktail of the trip! So much that I wanted to try another one there, but I thought better of it. It was boozy and it was only 6:30pm. Rob was disappointed that the Last Word that he was looking for wasn’t on the menu. I told him to ask the bartender could make one. It is the ultimate classic cocktail; so as long as they had all of the ingredients, they’d certainly no how. He said, “Absolutely,” without hesitation.

We went away from Violet Hour that night noting how much we enjoyed the Wicker Park area. Then we made our way back to the hotel to grab some dinner much closer.

I also have no pictures from our dinner at Quartino. {Rob was craving Italian again – haha – Surprise!} But I would tell you it was a terrible experience, from the wine, the food and the service. We will not be going back there and I want to note it so that we don’t forget. I just love the name, so I fear I would! The only thing that made this experience cool was walking into the large women’s bathroom and hearing “When the Doves Cry” coming from a woman’s smart phone. She was leaning against the wall, just listening. It had only been three days since Prince passed…

Overall, it was a great day. The only downfall was dinner; but so what? Rob was feeling better and we discovered some cool places!

Have you been to a Speakeasy-type bar before?