I know it’s Halloween, but it’s about time I recap our trip to Ireland. I mean, we did return three weeks ago! And while I’ve confessed that I am not a fan of Halloween, the Jack O’ Lantern does date back to Celtic traditions in Ireland. In fact, we did see a carved turnip at one of the Folk Museums we visited on our trip:

But this post isn’t about the history of the Jack O’Lantern {often spelled jack-o-lantern}, nor is it about Halloween. It’s the beginning of a series of posts about our trip to Ireland.

There is so much to record about our trip. So instead of a play-by-play, chronological description of what we did while we were there, I’m going to offer up our impressions on certain aspects of Ireland. I’d love to talk about the people, the sports, the food, the countryside and travel in general. Maybe you’ll be inspired to visit one day. If not, at least you’ll do some armchair {or desk chair} traveling along with me.

And because it’s Wine Wednesday, let’s start off with the beverage that flows like wine in Ireland:

Do you remember when I told you about Rick Steves’ philosophy about drinking wine in wine countries? It’s one I like to follow. And well, Ireland is, of course, Guinness country. So it’s compulsory to have a Guinness while there, right?

Truthfully, I don’t tend to drink Guinness back at home. And while many people think that Guinness is such a strong, dark beer; it’s really not. True stouts were once just stronger, darker porters – clocking in at 7 – 8% alcohol. A typical pint of Guinness is only about 4 – 4.5%. In addition, it’s much lighter in flavor than many of the stouts I love at home. If I’m going to drink a stout {often for dessert!}, I’d rather have one of the following full-flavored types:

These stouts tend to have espresso and dark chocolate notes to them. That’s why I love them!

In fact, when I’m in an Irish pub {anywhere in the world}, I tend to drink cider instead. It’s not that I don’t like Guinness. It’s just that it lacks flavor for me. In addition, it’s just so filling. When I drink stouts, I don’t tend to drink more than one.

However, we’ve been told that Guinness does taste a bit different in different places in the world. Rumor has it that there are even a few different recipes, too. In fact, Rob has had Guinness in both Paris and Italy and has been quite pleased with the product in Europe over the flavor in the U.S. Is it in his head? Maybe. But who cares if he knows he can enjoy it abroad?

But truth be told, in Ireland, the stuff is just better.

It’s fresher. It’s smoother. And they know how to pull a proper pint. Be patient for your Guinness. When ordered, you might feel like you aren’t getting the best of service. But your Guinness needs to be poured partway. Then it is set aside to settle a bit before getting topped off.

A properly poured pint of Guinness resting after the first pull.

The stages of poured pints…

After I got sick of drinking cider a few days in a row in Ireland, I shifted to Guinness. And if I was worried that I’d get too full or that it’d be too much for me midday, I quickly learned that instead of ordering a pint, I could just order a glass {a half-pint}.

In most pubs in Ireland you’ll find what I call the “Usual Suspects” on tap draft. These are ones you can expect pretty much anywhere:

Yes, I said Coors Light. And I would say that the top two beers I saw being served at the pubs while I was in Ireland were Guinness and Coors Light. I’d like to hang my head in shame that Coors Light has grown so popular. When I was last in Ireland in 2000, the only American beer you’d see was Budweiser. Now Coors Light? What is the world coming to? And you won’t see any English beers on tap at all. At least I didn’t.

No matter which beer you choose, almost every one is served in its properly labeled glass. Notice those Guinness glasses above? Well, you’ll find Coors Light served in Coors Light pint glasses. Bulmers Cider is served in – you guessed it – Bulmers glasses. This makes it really simple to buy a round for your friends! It’s easy to tell what everyone is drinking, without having to ask.

And I’d like to debunk the myth about Guinness being served warm in Ireland. It’s not. But it’s not served ice cold either. Nor should a stout be served ice cold. I’m often frustrated with bars and restaurants at home when they give me a frosty mug for an IPA or a stout. If you chill your beer too much, you mask all the flavors.

Stout is kind of like red wine. It’s not served warm or room temperature, but more like “cellar” temperature. And for stout, maybe even a little cooler than that. This is the proper temperature. And there is a reason for it. Don’t ask for a frosty mug. You want to taste your beer, don’t you?

Our driver, Ray, told us that he preferred Murphy’s Irish Stout to Guinness. He said that because it isn’t as mass-produced as Guinness, it isn’t as processed. Well, you can’t find Murhpy’s on tap everywhere in Ireland like you can Guinness; but when we found a pub with both Murphy’s and Guinness on tap, we decided to do a taste test!

Which Irish Stout is better?

There wasn’t an agreement at the table on which beer won. But which was the winner for me?

I thought it had more coffee notes and overall more flavor. Rob disagreed. We rarely disagree on beers. Still, I’d drink either Guinness or Murhpy’s on draft anytime in Ireland!

We did make a trek to Mulligan’s where we are told that you can get the best pint of Guinness in Dublin. And truthfully, it was excellent. Again, I’m not sure if it was all in our heads, but we thought we could tell a difference. When we asked a local what made the Guinness different here versus other pubs, he said:

Hahaha. Of course, I meant why he thought it tasted different. His only explanation is that it’s been running through the lines for so many years and so often…

In any case, I had my fair share of pints of Guinness in Ireland. But there’s nothing wrong with that because: 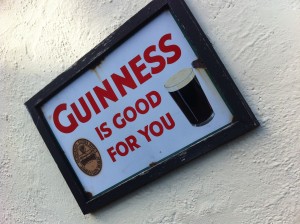 Well, everything in moderation right?

All I know is that in Ireland, I have no problem finishing a pint.

Do you drink Guinness?

If so, what are your favorites?

If not, what are your favorite kinds of beer?