This was a challenging one. I can’t understand why running a 5k is still so difficult for me. Here’s the recap:

The last two weeks I haven’t had much training or been as diligent with my running as I have in the past. In fact, my last run prior to the race was extremely hard. It made me wonder why I even do this. How could I have even considered a 10k?

This was my first Sunday race. So the usual routine of working all day Friday and then spending the evening trying to squash the nervousness was off the table. Luckily, we were asked by our friends Terri and Steve to join them for the day on Saturday for their anniversary! We spent the day golfing and then went to a Japanese Hibachi restaurant for dinner. I haven’t done that in so long!

Then, Rob suggested we all go see a band. So we stopped home to feed and let the pooches out and away we went. I had distractions all day! It was nice to be normal and not think about the race all day long.

My food wasn’t too bad either. I made myself an egg and veggie scramble for breakfast. Then I snacked on a Luna Bar on the course. For dinner, I ordered the filet mignon and scallops at the Japanese Steakhouse. I ate the small salad and soup before the meal, tried a little of Rob’s fried rice {but didn’t touch any of my own steamed rice}, savored the seared shrimp appetizer and only had enough of the sautéed steak, scallops and veggies before I got too full. I washed it down with some sake! And while I hadn’t yet had alcohol the night before a race, I did empty a pint glass while we were out listening to the band, but only one. {Some runners don’t recommend it, but if this girl can handle it, so can I!}  I sucked down water the rest of the night.

We got home at a decent time and I completed my usual night-before-race ritual of taking a nice hot shower before bed to help me sleep and lathering up with lavender oil. I slept okay, except for the two times I had to get up to go to the bathroom with all the water I drank!

I woke up with my usual stiff back, but I know that running usually helps with this. My breakfast was not my usual banana with peanut butter toast. I didn’t have any bananas on hand that weren’t frozen. So instead I made what I now call my Magic Smoothie! 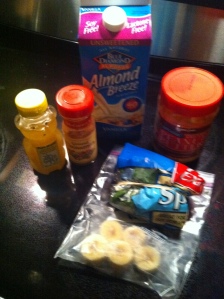 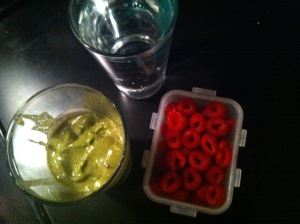 Pre-race breakfast: Magic Smoothie, water and raspberries {although I only ate a couple of the raspberries before we left}

Not pictured: My usual Americano I get on my way to the race.

Dogs were welcome, so we brought Sophie Jean!

Upon arrival, Rob recognized someone. I stopped to talk with him:

Carrie with O’Neal from The Biggest Loser – Season 9

He was there supporting the Kids Feeding Kids program and would be leading those walking the 5k. I told him what an inspiration he is. Don’t you think?

It was a beautiful day. I checked the weather so that I could note my Temperature to Attire Ratio. It was 52 degrees and sunny right before the race began. I wore the jacket in the picture above only to the race and took it off not too long before the race began. My short sleeved shirt and capris were ideal for this perfect running weather!

The 10k started before the 5k. We waited for the 10k runners to come back around and pass us before starting. We cheered them on as they ran by us!

I started out strong, felt great; but that was short-lived. For some reason, this was a really tough race for me. I think I was too concerned about time. I was already behind by mile one. I should not have turned on my RunKeeper which told me my pace at every half mile. I kept wondering why I had even considered doing a 10k. There is no way I would have been able to accomplish that that day. In fact, at some points, I considered stopping and walking. But I haven’t done that yet in a 5k race and I had no injuries, so I wasn’t about to start!

Still, later in the race, I had to tell myself to forget about the time. I said, “This run is for you! Think of what you are doing for yourself today! Just do it and enjoy it!”

At about mile two, the first 10k-er passed me. In total, I counted seven of them pass me before the finish line, the fifth one being a woman. 😉 Rob said that the second place finisher was not too happy with himself. And while I thought to myself, “Hey! I wish I could run that fast!” I do realize that we often are racing against ourselves. So, I have no idea this guy’s best 10k time, his goal, or how good or poorly he performed compared to usual that day. That being said, it made me realize that I should be happy every time I complete a race, regardless if I PR or not. Despite how difficult this one was for me, I came back in smiling: 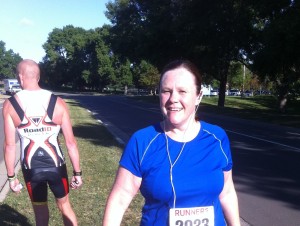 {Incidentally, the guy in the background was the one who wasn’t too happy about taking second place in the 10k.}

Okay, so after crushing my personal record at my last 5k, this was a bit of a disappointment. But I pretty much knew this would happen by mile one.

But in the grand scheme of things:

My goal while I continue to lose weight is to get faster. Since at my next race I’ll no longer be able to count the number of 5ks I’ve done on one hand, let’s do a little comparison on how I’ve done so far:

What are your night before race rituals?

Tell me about a celebrity you’ve encountered!