Having your flight canceled when you are in New Orleans is both a blessing and a curse.

So I had this idea that for dinner on our last night in New Orleans, we would check out some Happy Hours. We had already eaten an early lunch. We had to leave our hotel at 6am the next morning to catch our flight. And we aren’t late-night partiers. Apps and cocktails from 4pm to 6pm sounded perfect!

Plus, this meant we could check more boxes. 🙂

The funny thing, as I started researching the city’s Happy Hour spots, I learned that Domenica is supposed to have one of best! Whoops. We just had lunch there. That’s a note for next time!

Here are some tips to make the most of Happy Hour in New Orleans:

To give you an idea, we hit a total of 4 stops during Happy Hour, eating at two of those. This is our New Orleans Happy Hour experience!

Our first stop was at here because it was close to our new hotel for the night and we weren’t quite hungry yet. This was going to be a cocktail stop! 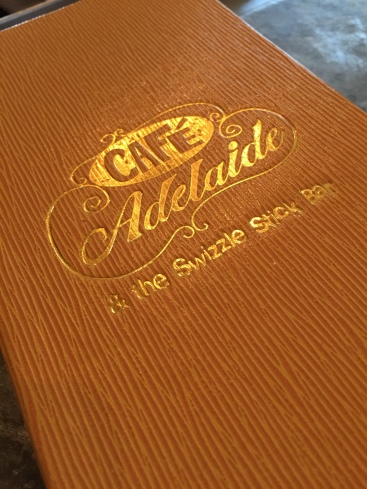 Most Happy Hours in New Orleans run from 4pm to 6pm. Cafe Adelaide was a great place to start because they begin at 3pm! Although we weren’t hungry yet, I was still surprised that Rob didn’t go with those fries! 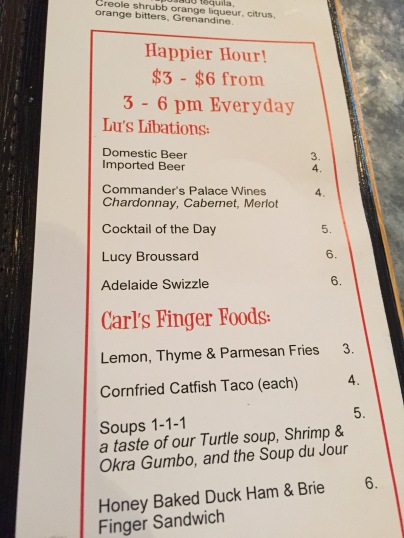 The Cocktail of the Day was something boring – like a Tom Collins. So I went with the Lucy Broussard.

Rob strayed from the HH menu. Have I ever mentioned that Rob is a fan of craft sodas?

That helped him decide! 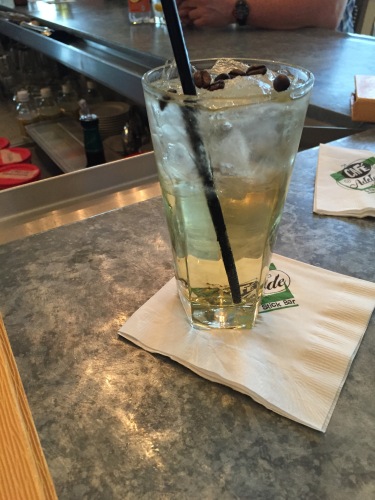 After that, we made our way to The French Quarter. We came upon an establishment called the St. Lawrence. I recognized the name, but couldn’t remember why. The door was open and I just knew we had to pop inside.

St. Lawrence’s sidewalk board outside indicated that they serve food late night – until 2am. They also touted the best fried chicken in the city. {Anyone can say that, right?} I still made a mental note in case our happy hour eats did not carry us through the evening.

There weren’t many people there at the time; but I noticed two gals sitting several seats down. By their conversation, it sounded like they were assistants of Very Important Somebodies. It seemed they were hanging out there just to buy some time. One of them ordered the fried chicken to go. When her food arrived, they still had some time left. So she opened it up and began eating. Let me tell you, it smelled sooooo good!

There was quite an interesting array listed on the wall menu. 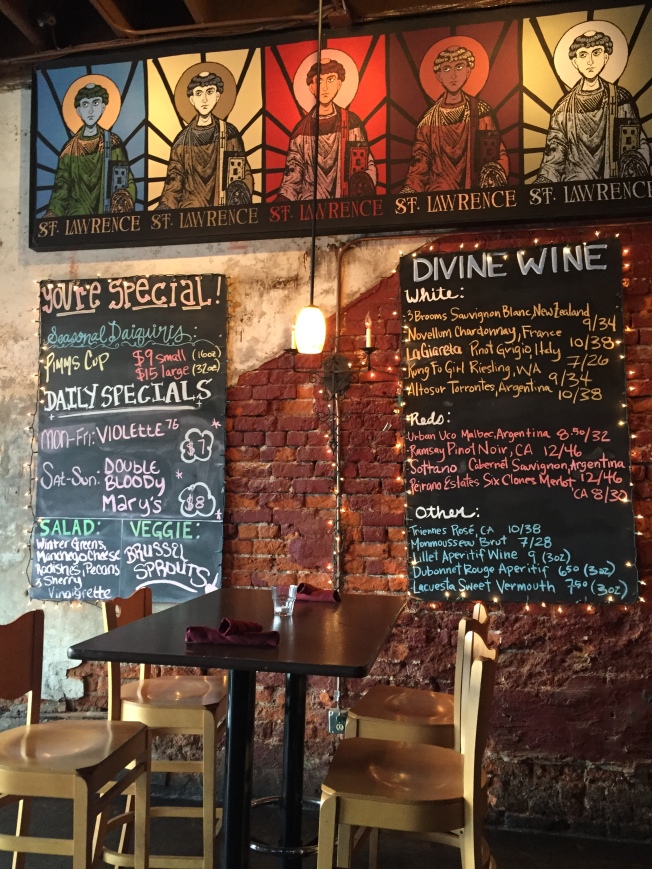 I asked about Happy Hour specials, but it was just something like $1 off anything. I couldn’t make up my mind. And I didn’t notice that Violette 75 on the menu board behind me until after I ordered a boring old Gin and Tonic! Rob was happy about the beer list and ordered something from that.

I had a feeling we would be back…

We next happened upon Kingfish, where we checked out the menu before going in because Rob was starting to get hungry. It was the Cajun Farmhouse Sausage Wonton in the lil’ eats section that sold him. 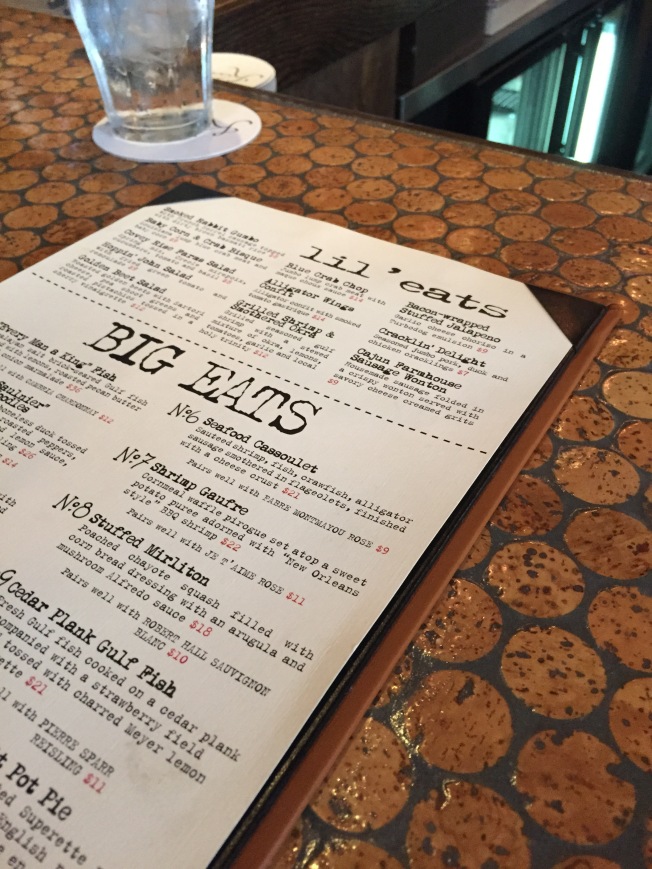 Kingfish’s 3:30pm to 6pm Happy Hour is an excellent one for wine.

Just check out the list of wines by the glass!

This was my opportunity to get a little bubbly rosé!

The cocktail menu looked fun, too, if you are cocktail hopping!

We had to wait until the clock struck 5pm to order off the regular menu so Rob could get his sausage wontons. It was nice to just sip and chat while we waited. I perused the rest of the menu, too. I must say I was intrigued by the Cochon de Lait Pot Pie after my trip to Cajun Mike’s, as well as the guava butter garlic fries! I’ve never heard of anything like that before.

The great thing about dining at 5pm at the bar is that we could order off both the dinner menu and the happy hour menu. So we put an order for the Happy Hour French Fries Fondue. 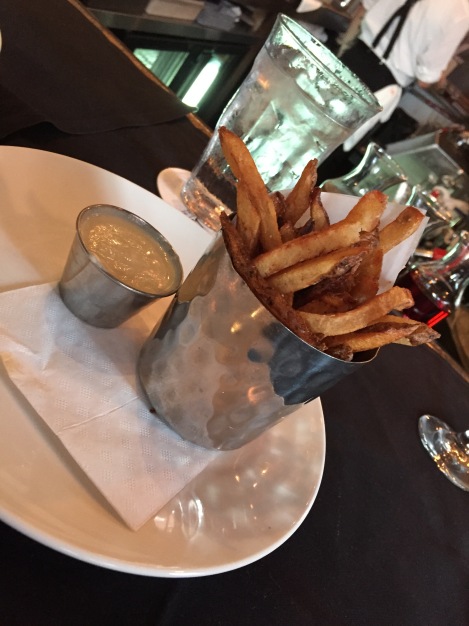 These delectable fries came with a warm blue cheese sauce. I have decided that this is how all fries should be served. Forever and Ever. Amen.

Then, the highly anticipated star of the show:

These were worth every morsel. All of the appropriate and contrasting textures were there. There was lots of flavor to boot. Best cheesy grits of our lives. The food that we had at Happy Hour here at Kingfish makes this a worthy contender for a real meal sometime here in New Orleans.

At this point, it was almost 6pm, which meant Happy Hour was over in most bars and restaurants. But then I recalled one that lasted until 7pm. That was the Happy Hour at Tableau. We inquired about the bar at the entrance and were shown into the back. 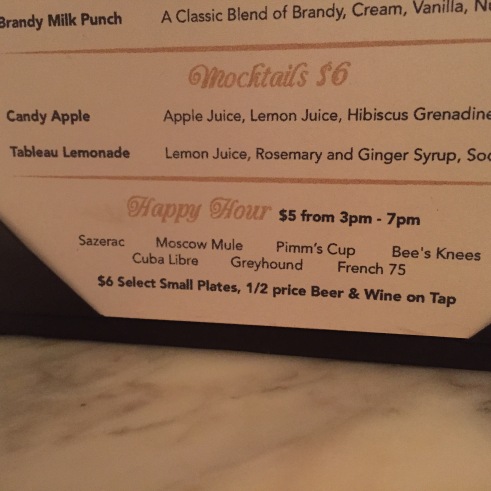 Rob and I ordered the “wine-on-tap” which was half off for happy hour. Okay, that definitely is some $3 house-tasting wine. 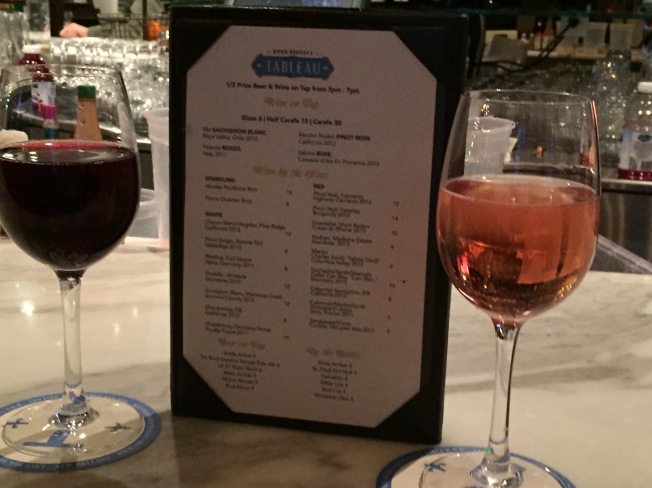 It seems most of the happy hour crowd had already left because we were the only ones at the bar. Can you guess what we ordered to eat?

While we waited for our food, the bartender was making vats and vats – I mean VATS and VATS – of a red drink. It was Monday, but perhaps she was preppping for the weekend. She said it was one of their most popular drinks called the Red Lights. She let us have a sample: 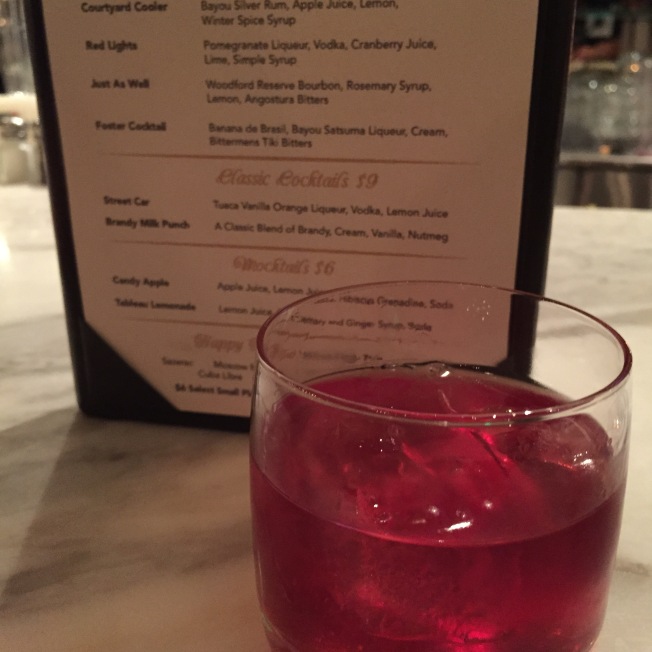 I’m not sure what size glass it normally comes in, but it’s a $12 drink. “That tastes like college!” Rob said. She laughed. He ordered some other cocktail instead. I drank the Red Lights.

I was really surprised by what he ordered to eat from the Happy Hour Menu.

They were four little skewers of heaven. Me, on the other hand… I finally got my burrata. 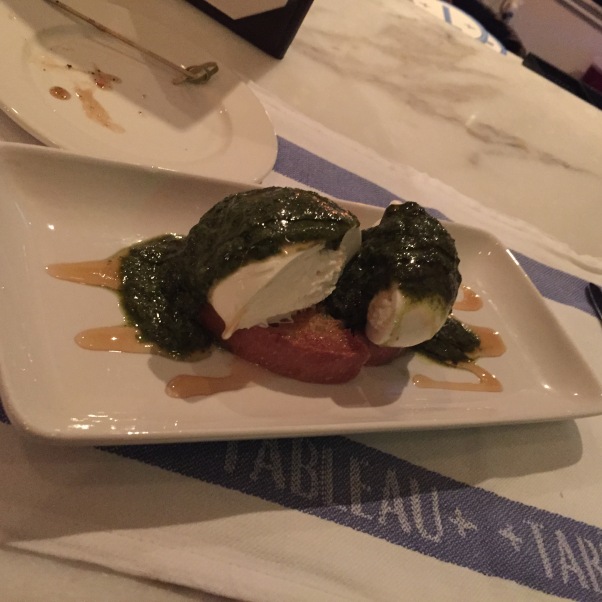 All this fancy food at a fraction of the price. Happy Hour stops are definitely the way to go if you want to check a lot of boxes in New Orleans and try lots of little nibbles of food and drinks.

After that, we were going to call it an early might. But we may have stopped at a couple of our favorite Irish pubs on the way back to the hotel. And a couple hours later, of course, my mental note kicked in…

Back to the St. Lawrence! There on that menu was that fried chicken.

I ordered the fried chicken to-go. However, the wait is about 20 minutes. So I just had to order that Violette 75 that I missed the first time!

My understanding is that Creme de Violette replaces the Cognac in the original French 75, which turns it into a Violette 75. It turned out to be one of my favorite cocktails of the trip!

Rob wanted a little more substance for food, too. 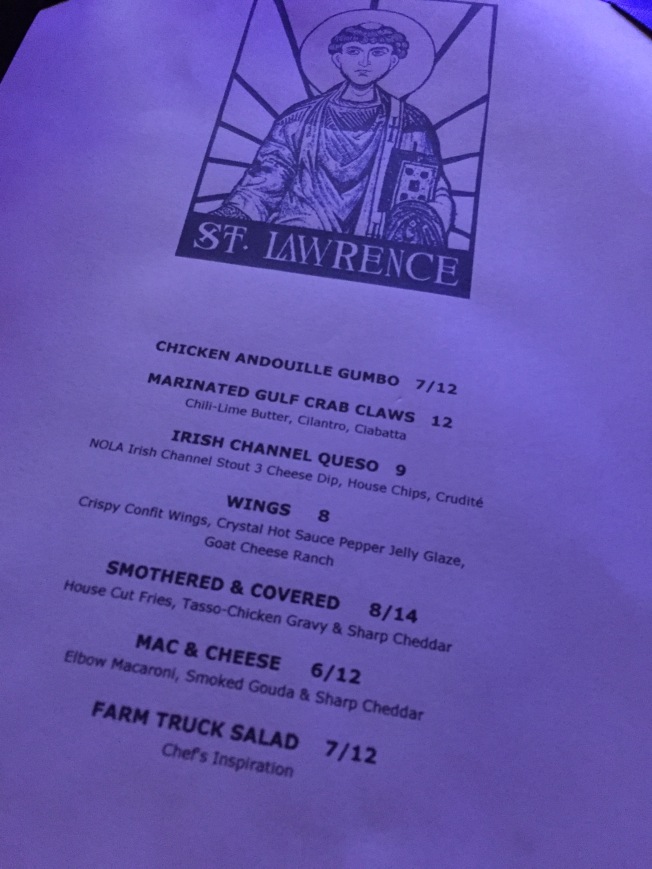 The Mac & Cheese was calling his name. The menu, in general, looks pretty tempting. In fact, the St. Lawrence gets a lot of praise for having such great food late night. They are catering to more than the post-Hurricane-and-Hand-Grenade crowd.

When we got back to the room, I dove into that fried chicken and the collard greens! 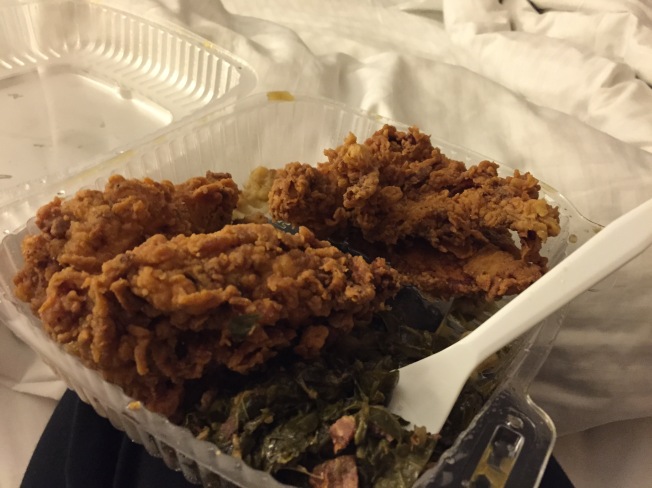 It was salty, crunchy, juicy… everything you could possibly want in fried chicken. It was the perfect epicurean end to our New Orleans holiday. We checked a lot of boxes and feasted in what is perhaps our country’s most culinary city. Having checked said boxes, it was now time for a reality check. 🙂