Although we had a Green Bay address growing up, we lived on the outskirts, near the villages of Howard and Suamico. There wasn’t much nearby. We couldn’t even get pizza delivered. But the area has grown and expanded, so there’s now even a gas station less than four miles from my parents’ home.

You’ll also find a little pub and grill nearby called Townline. It was erected not long after I moved to Minnesota. What’s fun is that while the building is new, the tavern isn’t. You can read about the history here.

Because it’s so close, it’s a place we can easily get some grub and a pint when we are in town. I wasn’t intending to ever talk about it on the blog. But why not talk about an old (or newish, depending on how you look it) standby?

What completely surprised us is that Townline is open 7am until midnight every day. {But somehow I think that just means food. My guess is that they stay open until the usual 2am bar time for drinks.} And they have free Wi-Fi. The Monday morning before Christmas Eve was the perfect time for Rob to log in to work and put in a few hours. And we could order some breakfast! That’s something we hadn’t done at Townline yet. Mostly, because we had no idea that they served it!

Since I wasn’t the one working, I ordered a Bloody Mary. I was asked if I wanted the Breakfast Mary. Can you believe I ordered it after I was told it was made with bacon-infused vodka? 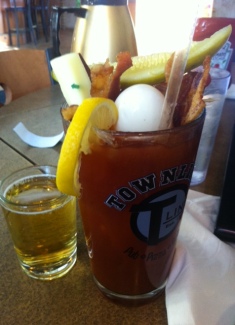 I usually don’t like bacon in things. I only like it by itself because in dishes and on foods, I feel it tends to overpower the other flavors. But this bacon flavor was subtle and well-balanced in the Mary! I would highly recommend it. Rob took my brother there the next morning and JR said it was the best Bloody Mary he’s ever had. I loved that a hard-boiled was part of the garnish. However, they must be either pickled or preserved somehow, because the egg had a strong vinegar flavor. Not my style.

I love eggs and omelets, so I couldn’t go wrong with my breakfast: 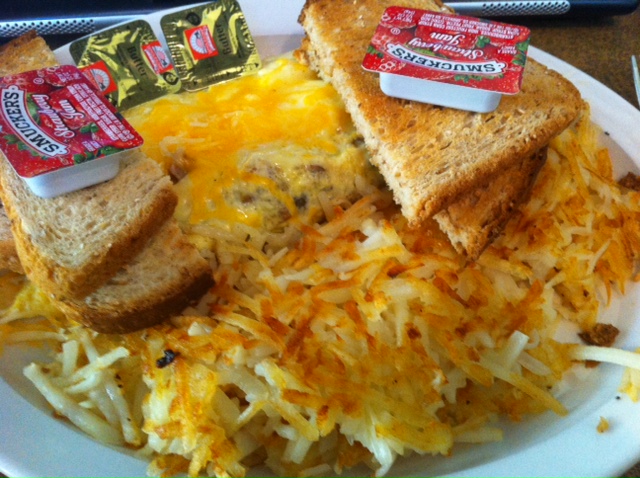 Rob went out on a limb and tried something he’d never had before – a Monte Cristo:

Breakfast Monte Cristo made with sausage and served with strawberry sauce

It was rich and so much food that he only ate about a quarter of it!

But enough about breakfast. There are over 50 beers on tap here; but we don’t get too excited about that anymore. There’s rarely something new and interesting to us. That sounds completely snobby, but we’ve just had most of the selections available and know our tastes. But hey, we come from an up-and-coming craft brew mecca. And we understand that Townline needs to offer what suits their clientele. But, if there’s a local brew that is new to us that we can’t find in MN, we give it a try.

The menu at Townline is huge, but I’ve learned what I like to make a quick decision.

My two favorite things to order are:

~ Friday Fish Fry {if we are in town on a Friday!}

~ Howard-Pulaski Burger – burger topped with a slice of kielbasa!
*Rob is saddened that they no longer have this burger. He thinks because kielbasa is no longer on their menu. He may just have to try the Howard-Suamico next time which is made with a brat patty!

If you are in town for a Packer game, the Townline is a bit out of the way. I’d hop over to Kroll’s for burgers and fried-anything for a side. It’s across the street from Lambeau and you can’t miss it. It’s kind of an institution that you just shouldn’t miss!

I thought I’d take this opportunity to talk a little about the culture that is Northeastern Wisconsin, while I’m at it. It’s funny that it took me moving out of the area to realize that these things were uniquely part of the culture there. To me, while living there, it was just normal!

~GO PACK GO! Nearly everyone supports the Packers. On game day, everyone breaks out their Packer gear. Solidarity. No matter if we are sucking or not. Whether there’s a home or away game, the mall will be dead. Many streets will be, too. While there are some diehard Viking fans in Minnesota that I highly respect, most are fair weather fans, if at all!

~German and Polish influence – That’s why you see us on TV cooking up brats and kielbasa while tailgating at Packer games! Don’t forget the sauerkraut.

~Friday Fish Fry – You’ll find this at nearly every restaurant that isn’t a chain – every Friday. Not just during Lent. And it’s almost always is perch. I’ve never seen a fish fry made with perch in Minnesota. {Though I’ve had some of the better fish and chips in Minnesota than I’ve had elsewhere!}

~Chili with noodles – Really, it wasn’t until college that I realized chili was ever made without noodles. My mom always made it with spaghetti, right in the pot! I see that Townline offers it on their menu with or without.

~Double Bubble – This is the term for Happy Hour. It technically means that you can buy two-for-one cocktails, but is often used synonymously with Happy Hour now.

~The Old Fashioned – My mom has ordered Whiskey Old Fashioned Sours for as long as I can remember. It’s only been recently that she’d be able to order one in the Twin Cities and get someone who can make one that she deems worthy!

~Bubbler and Tyme Machine = Water Fountain & ATM. I once asked for a Tyme Machine at a movie theater in MN. (Before you could use a credit card to buy a movie ticket!) Yes, they looked at me like I was crazy. Especially because I kept saying it louder because I thought they couldn’t hear me behind the glass… I’m more careful about that one now. 😉

What are some parts of your local culture that you didn’t realize until you traveled or moved elsewhere?